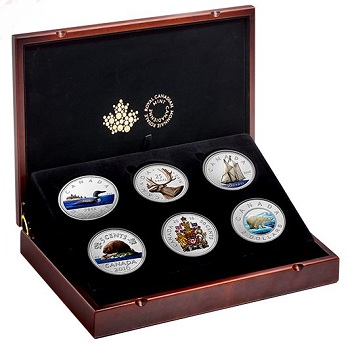 The Royal Canadian Mint has launched the second issue in its “Big Coin Series,” which takes a retrospective look at the circulating coins of Canada as large-size strikes. As Canada prepares to celebrate the 150th anniversary of confederation by issuing a commemorative series of circulation coins in 2017, the Royal Canadian Mint has highlighted the current set with five-ounce pieces that celebrate the classic artwork of designs originally introduced in 1937.

The new issue is the familiar circulating dollar coin, affectionately referred to as the “loonie.” The nickname is based on artist Robert-Ralph Carmichael’s reverse design, introduced in 1986, which depicts a common loon duck in the middle of a pond.

The gold-colored coins were introduced into circulation in an effort to provide a dollar denomination during the removal the banknote of the same value. The coin became very popular; since its introduction, it has retained the same reverse design, with the exception of commemorative designs celebrating various national anniversaries. 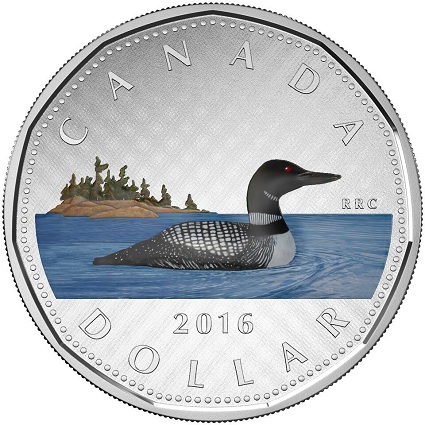 In launching the second five-ounce fine silver piece in the “Big Coin Series,” the Mint has added color to the central motif of the coins. Every feature of the dollar coin design is faithfully reproduced on a 65.25 mm diameter surface. 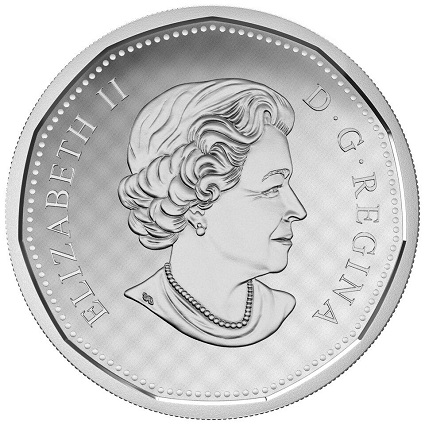 The obverse features the effigy of Her Majesty Queen Elizabeth II by Susanna Blunt that has been used on current circulating Canadian coinage since 2003. Her Majesty’s portrait is gold-plated.

This second issue is part of the Royal Canadian Mint’s overall six-coin series of five-ounce pure silver versions of Canada’s 5-cent, 10-cent, 25-cent, 50-cent, 1-dollar, and 2-dollar circulation coins. The first coin issued was the two-dollar coin. The series is available by subscription only, and exclusively to destinations in Canada and the United States. A custom wooden presentation box is available to house all six coins.

For more information on this and other coins offered by the Royal Canadian Mint, please visit their Web site. Information is offered in English and French, with international orders dispatched where applicable.