The United States Mint has announced the sales end date for numismatic products containing the 2009 Lincoln Bicentennial Cents, as well as the coin cover products featuring the 2009 District of Columbia & U.S. Territories Quarters. These products are highlighted in a new section of the Mint’s online product catalog called “Last Opportunity.”

Sales of the following products will conclude on June 15, 2010:

Sales of the following products will conclude on June 30, 2010: 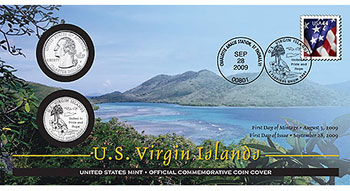 Each of the covers includes one coin each from the Philadelphia and Denver Mints, taken from the first day of production. The coins are mounted on a display card paced inside an illustrated envelope with a 44-cent Flag stamp. The covers are postmarked from the official circulation release date  and location for each quarter. The United States Mint will not be producing First Day Coin Covers for the America the Beautiful Quarters series, so these products represent the last First Day Covers for quarters for the foreseeable future.

The United States Mint’s “Last Opportunity” products can be found at http://www.usmint.gov/catalog