The Royal Canadian Mint has unveiled its last silver coin in the hugely popular series “A Story of the Northern Lights.”

The northern lights or aurora borealis are, simply put, nature’s ultimate light show. This spectacular natural phenomenon can occasionally be seen in the night sky over both polar regions and in countries close to these locations. Once seen, it is never forgotten. In the southern hemisphere, the amazing light show is referred to as the aurora australis, or southern lights.

Just what causes this phenomenon? These occurrences are easy to explain, according to Aurora Service Europe, a northern lights bulletin service that tracks and alerts its readers to impending events around the northern polar region. Auroras occur when gaseous particles in the Earth’s atmosphere collide with charged particles released from the sun’s atmosphere. Solar winds blow charged particles known as electrons and protons toward Earth, where they are largely deflected by the Earth’s magnetic field. However, that magnetic field is weaker at either pole, allowing some particles to enter the atmosphere and collide with gas particles. These collisions emit light that we perceive as the dancing lights of the auroras. 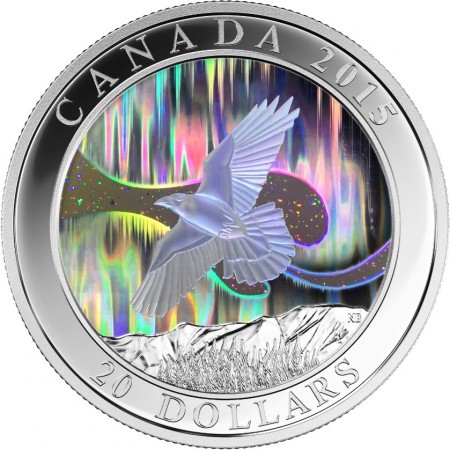 Variations in color are caused by the collisions of varying gas particles. Green auroras are the most common and are produced by oxygen molecules located about 60 miles above the earth. The rarer red auroras are produced by high-altitude oxygen, at heights of up to 200 miles. Nitrogen gases are needed to produce blue or purple aurora lights.

As Canada enjoys the most northerly position on the North American continent, it seems fitting that the Royal Canadian Mint should highlight this quintessential part of the Canadian experience. This silver coin merges the old with the new, thanks to the mint’s unique achromatic hologram technology, which employs a patented nanotechnology-based method of producing three-dimensional non-colored holographic elements. Designed by artist Nathalie Bertin, the coin utilizes this technology to create the amazing effect of the Aurora Borealis. 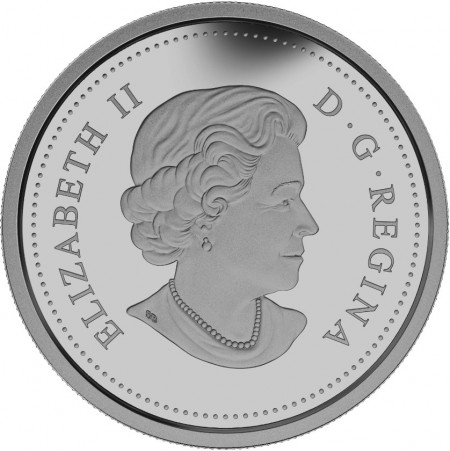 The reverse design features a stylized raven in flight above an engraved coniferous mountainside, set against a sky lit by the northern lights. The raven and sky are entirely holographic. The depiction of the raven with wings outstretched was inspired by the First Nations’ storytelling traditions of the Pacific Northwest. The rocky, mountainous terrain near the bottom of the design is engraved in silver. The “sky” above the mountains and surrounding the raven is a stunning hologram reminiscent of the ever-changing, swirling rainbow of the aurora borealis. The obverse includes the current portrait of HM Queen Elizabeth II designed by Susanna Blunt and in use on all circulation and most commemorative Canadian coins since 2003.

This is the third and final coin in this series. The first coin was issued in 2013; the second coin was released in 2014. The coin is encapsulated and presented in a Royal Canadian Mint-branded maroon clamshell with a graphic protective box. For more information on this and other coins offered by the Royal Canadian Mint, please visit their Web site. Information offered in English and French, with international orders dispatched where applicable.