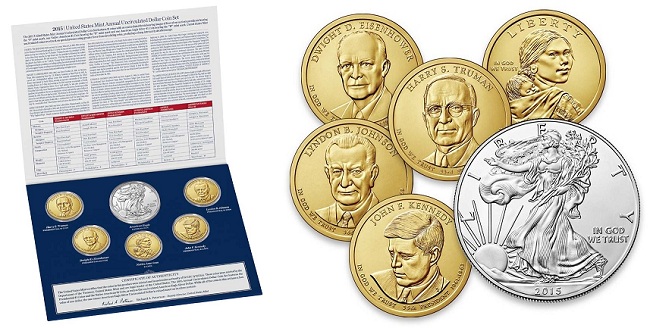 The 2015 Annual Uncirculated Dollar Coin Set will no longer be sold by the U.S. Mint after noon today, December 30.

Due in part to recent legislation prompting the release of 30th anniversary issues of American Eagle Silver coins in 2016, all Silver Eagles dated 2015 and earlier will be pulled at noon today. This means that any sets containing Silver Eagles will be pulled as well. Since the Mint has yet to set a release date for the 2016 issues of these coins, it may be a while before collectors will again be able to order numismatic Silver Eagles from the Mint. Bullion issues of the coin are scheduled to go on sale to authorized purchasers on January 11.

The following products will no longer be available after noon ET today, December 30. Among the items included on this list are all 2015 commemorative issues.

Several other products will off sale tomorrow, December 31, at 3 p.m. ET. They are:

You can take a look at the most recent version of the U.S. Mint’s 2016 product schedule here. To purchase the above products prior to the deadlines, please visit the Mint’s Web site.