The family who disputed ownership of ten 1933 Saint Gaudens $20 gold pieces was awarded the rights to their ownership last Friday after a US appeals Court overturned a previous jury verdict. This new decision means they could now potentially sell these pieces for an estimated $80 million or more on the open market.

The coins, often referred to as “Double Eagles,” were designed by sculptor Augustus Saint-Gaudens  and depict a flying eagle on the reverse and a figure representing Liberty on the obverse. The coins were first placed into circulation in 1907 and the last of these coins was issued as legal tender in 1932. The US Mint struck nearly a half-million of the Double Eagles in Philadelphia dated 1933 but these coins were never released. They were melted into gold bars after President Franklin D. Roosevelt abandoned the gold standard as a result of the closure of many Banks due to the Stock Market crash and the onset of the Depression.

The US Department of the Treasury officials insisted that the $20 Double Eagles were in fact stolen from the US Mint in Philadelphia by Mr. Switt with the help of a US Mint employee before the 1933 dated coins were scheduled to be melted down after the United States was taken off the gold standard. Treasury officials argued Joan Langbord, the daughter of the man alleged to have stolen the coins along with a Mint employee – and her sons cannot lawfully own the coins, since these coins were never officially issued by the Treasury and are still in fact property of the US Treasury. Mrs Langbord claimed she found the coins in a family bank deposit box in 2003. Knowing about the rarity of these 1933-dated $20 gold coins, the family had taken the pieces to the Secret Service in Philadelphia to have them examined and authenticated. It was at this point that the coins were declared to be genuine and were then confiscated.

Joan Langbord’s father, a jeweler by the name of Israel Switt from Philadelphia who died in 1990 had some questionable dealings with the Mint in the 1930s and had twice been investigated over his coin holdings. In 1944, Switt admitted then to the Secret Service that he had possessed and sold a set of nine other Double Eagles, which were recovered and destroyed.

A jury in 2012 found in favor of the government and agreed that the coins were in their possession unlawfully. However, the appeals court have now returned the coins to the Langbord family citing a technicality that US officials had not responded within a 90-day limit to the family’s seized-property claim, filed in 2004. Langbord family lawyer Barry Berke commented, “Congress clearly intended for there to be limits on the government’s ability to seek forfeiture of citizens’ property, and today’s ruling reaffirms that those limits are real and won’t be excused when the government violates them.” While prosecutors argued to jurors in 2011 that Switt must have stolen the coins with help from a Mint insider, Berke argued that Mr. Switt could have traded his scrap gold for them.

Mrs. Langbord, now in her mid-80s, worked in her father’s store on Jeweler’s Row for most of her life. Her sons, entertainment lawyer Roy Langbord, of New York City, and David Langbord, of Virginia Beach, Virginia, joined her in the legal fight. They have thus far not commented on the ruling nor have they decided whether the coins will be sold, according to their family attorney.

These coins, considered legendary in the numismatic world have a very colorful history. Of the three known coins to have survived being melted down – one Double Eagle, was known to have once been owned by famed coin collector, King Farouk of Egypt. This surviving Farouk coin is believed to have been a 10th coin from the batch which Switt had admitted to having sold in 1944. This very coin sold in 2002 for $7.6 million, at the time, a record price for an American coin. The coin’s previous owner, Stephen Fenton, a London coin dealer was once jailed by the US when he attempted to sell the coin to an interested buyer while in the United States. Mr. Fenton also disputed the coin’s ownership successfully and as a compromise with US authorities, agreed to the proceeds from the coin’s sale being divided with the US, a deal also brokered by Barry Berke. It was disclosed that the Langbord family had offered the government a similar division of future proceeds but were rebuffed. 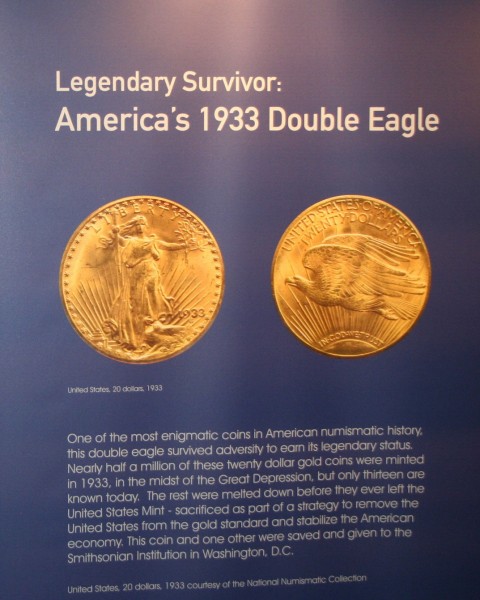 The U.S. Department of Justice said it was reviewing its options after Friday’s ruling but a Treasury spokeswoman had no comment. The two other 1933-dated Double Eagles which are considered to be in lawful hands are the coins which the US Mint sent to the Smithsonian Institution for inclusion in its own US coin collection. These coins are on permanent display. One of these coins also went on display, visiting different venues during a month-long tour of several European cities.