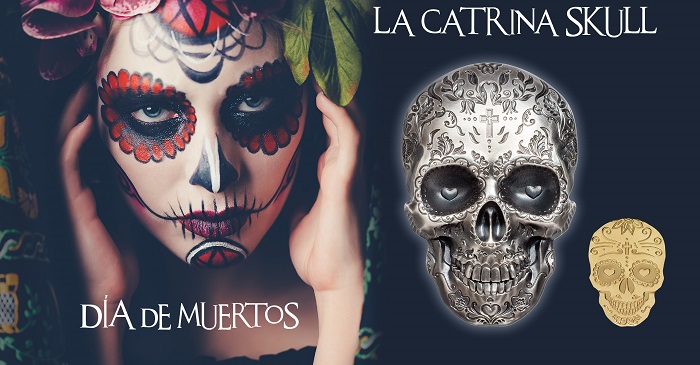 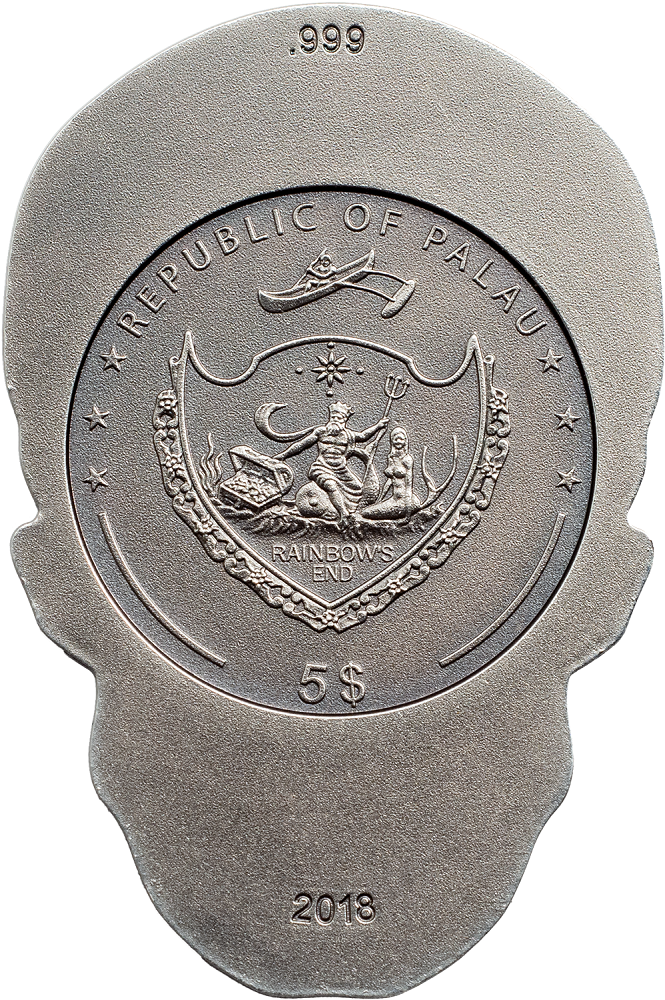 The obverse of the silver version shows the coat of arms of the Republic of Palau, surrounded by the legend REPUBLIC OF PALAU; below is the face value of 5$. Above the inscription is .999 and below is the year of issue, 2018. 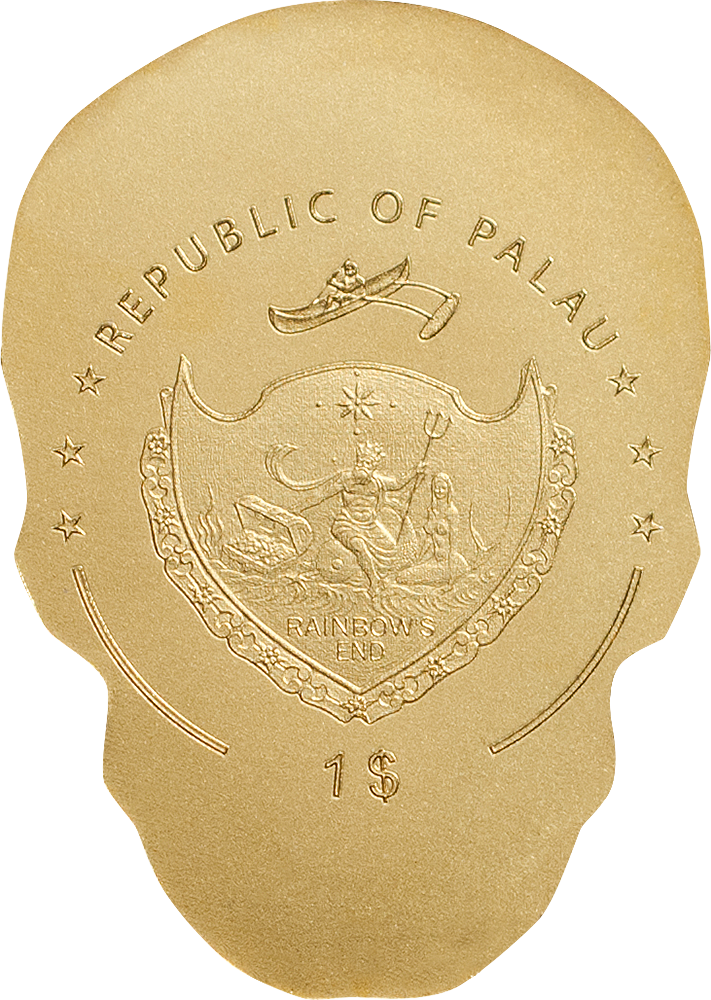 The obverse of the gold version is designed identically. The face value is indicated as 1$. Fineness and year of issue are not depicted. 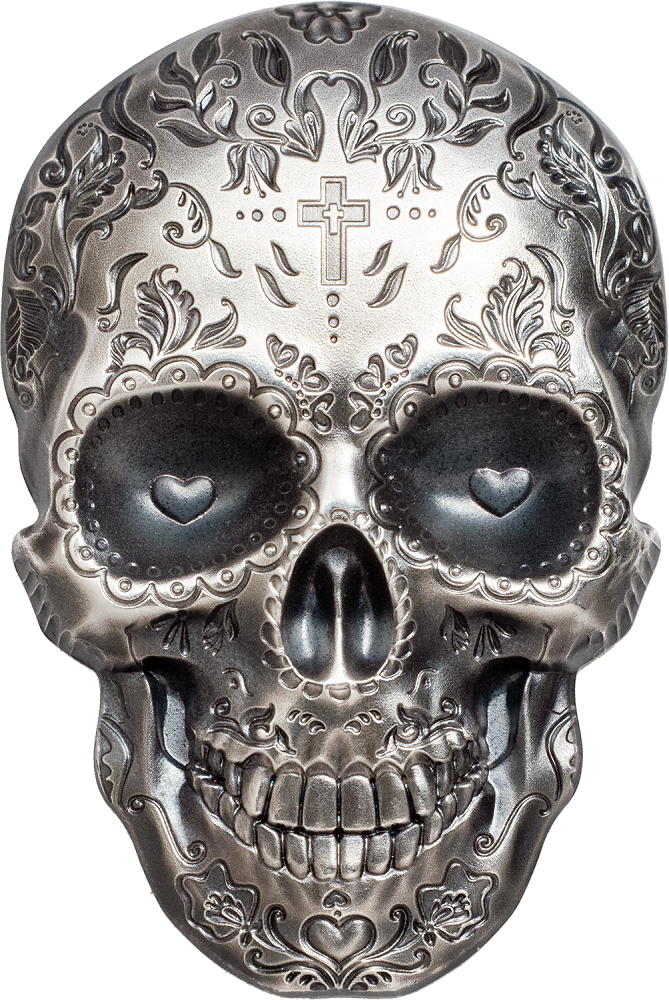 The reverse features an elaborately decorated Mexican skull bearing a cross on its forehead. The eyes’ pupils are heart-shaped. 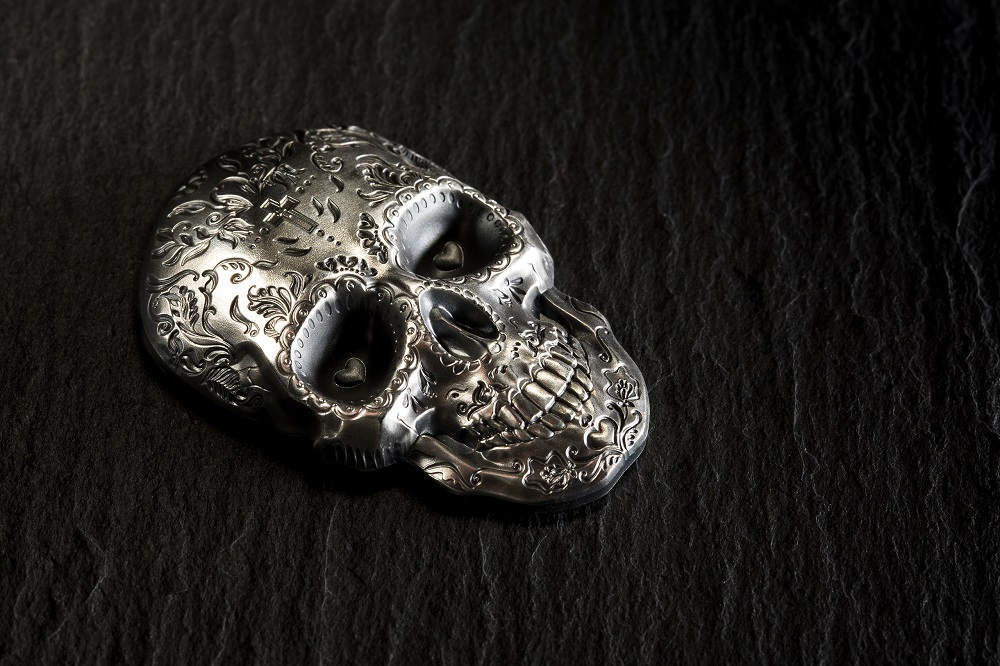 The skull of the silver version is sculptured three-dimensionally.

During the 2018 ANA World’s Fair of Money, CIT Coin Invest AG presented the third motif of its popular Skull series. This time, the skull harkens to the affectionate care the dead are honored with on the Día de Muertos in Mexico. During this holiday, which takes place between October 31st and November 2nd, the deceased are supposed to return to their graves to have a cheerful celebration with the nearest and dearest they left behind on earth.

In celebration of this holiday, candy shaped like skeletons and skulls is offered. It is the decorations and crosses that are added to baked goods using sugar which the adornments on CIT’s skull are reminiscent of. The issue’s name, “La Catrina,” is a reference to a particularly popular figure of this Mexican tradition. “Catrina” is used to denote — fairly derogatively — a rich woman who denies her Mexican origins in order to imitate the French. A cartoon drawn by graphic artist José Guadalupe Posada became one of the most popular characters of the Mexican Day of the Dead.


The skulls, which are part of the incredibly popular CIT Skull Series in silver, are minted miniature sculptures of highest plasticity that owe their design to smartminting technology. After the first issue in 2016, both Skull No. 1 and Pirate Skull, as well as Big Skull, were sold out within a few weeks.

The smaller gold version — in the meantime the third issue, too — is something very special as well. It is due to BGM (Big Gold Minting) that half a gram of gold can be turned into a gold coin with a height of almost 14 millimeters. The silky, soft-looking surface was achieved using a newly developed processing method called Silk finish.