Künker’s March sale reached a total hammer price of 9.6 million euros, exceeding the estimate by about 50%. It goes without saying that this was due to some extraordinary results, including 180,000 euros for a Siculo-Punic tetradrachm.

From the first day to the last, the March Sale of Künker was a numismatic event. Whether collections or single items, whether ancient or modern coins, whether Germany or Overseas – Künker has customers all over the world, collecting all kind of different fields, and that pays well in terms of results achieved.

780 lots were offered in the 11th phaleristic auction sale of Künker. They were estimated at 500,000 euros. The total hammer price added up to the pleasant sum of 770,000 euros. Responsible for this magnificent result was, amongst others, the Pour le mérite that had been awarded to Admiral Reinhard Scheer on 5 June 1916. Having been estimated at 10,000 euros, it rose to 32,000 euros in the end. 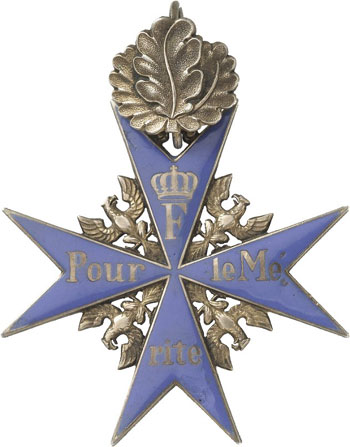 Splendid results were of course achieved by foreign decorations as well. A case in point is the history-charged Most Exalted Order of the Star of India Queen Victoria awarded primarily to Indian Princes. The attractive piece estimated at 10,000 euro sold for 14,500 euros.

The history of the Savoy Supreme Order of the Most Holy Annunciation, which the King of Italy declared the highest decoration of his young nation, dates back to the Middle Ages. A set of that order with collar, having been called for 12,000 euros, fetched 28,000 euros. Probably the top item of the Dr Norbert Herkner collection, who had assembled what is most likely to be the most important collection of Vatican orders and decorations, was the Military and Civil Badge of Honor bearing the portrait of Pope Pius IX in gold. It realized exactly its estimate, hence 15,000 euros. 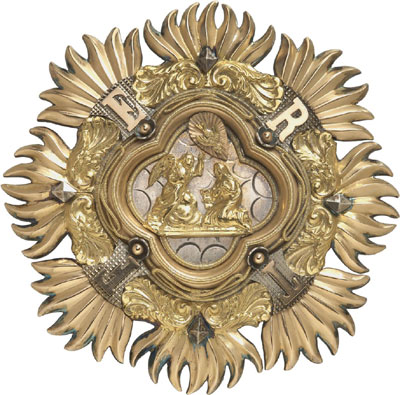 Great surprises were to be witnessed with the Orders from Overseas. In that category, the estate of a head of a state, whose identity could not have been ascertained anymore despite the most thorough research, was auctioned off. Part of this estate was the highly attractive Order of the Aztec Eagle that is closely connected with the history of the Mexican Republic. The order, decorated with Pre-Columbian subjects, left its estimate of 10,000 euros behind and obtained 22,000 euros in the end. 33,000 euros were realized by the Thai Order of the Royal House of Chakri – likewise part of the mentioned estate – that had been founded by the Siamese King Chulalongkorn in 1884 (estimate: 15,000 euros). 20,000 euros had been the pre-sale estimate of the diamonded Ottoman Order of Medjidjie, whose 220 precious little stones alone have a current market value of 8,370 euros. The collector’s value was even higher: the specimen changed hands for 30,000 euros.

The second day of the auction week started with a large series of Russian coins. Despite the crisis in the Ukraine and the rouble exchange rate, there were still some surprises to be witnessed. The rarities are still in demand, as proven by the just very fine but admittedly very rare rouble from 1741, struck in the St. Petersburg Mint, which had been estimated at 3,000 euros but sold for 12,000 euros in the end.

The gold coins were next in line. When browsing the auction sale catalog most collectors instantly noticed the gorgeous coins from the time of the Hundred Years’ War. Especially the rare specimens of the Duchy of Brabant triggered a particularly fierce bidding fight: lot 1429, a tourelle d’or of Duchess Joan brought 28,000 euros (VF; estimate: 15,000 euros), lot 1430, a lion d’or de Brabant of Anthony of Burgundy realized 24,000 euros (about EF; estimate: 15,000 euros) while lot 1431, a ½ lion d’or de Brabant of the same ruler sold for 28,000 euros (EF; estimate: 10,000 euros).

The highlight was still to come. In Auction 260, Künker offered a superb selection of coins from the German Empire, including nearly every rarity. The collectors were thrilled, and it took a little bit longer for some items to change hands. Let’s just mention a few examples. An always reliable indicator for the price level of coins of the German Empire is the result of ‘Frederick the Wise’, presumably the most beautiful and surely the rarest silver coin of the whole series. Having been estimated at 60,000 euros, the perfect specimen was hammered down for 65,000 euros. An even higher hammer price was obtained by the rarest gold coin of the German Empire, the 20 mark piece of Ernest II of Saxe-Coburg-Gotha, struck in 1872, with as much as 100,000 euros (estimate: 60,000 euros). The extremely popular coins for German New Guinea featuring birds of paradise on the reverse, estimated at 20,000 euros each, brought 40,000 euros for the 10 mark piece 1895 and 39,000 euros for the 20 mark piece 1895. To conclude this category, let us look at a 10 mark piece 1890 of George II of Saxe-Meiningen which, strictly speaking, is not that rare. It bears testimony to the fact that, when it comes to coins of the German Empire, grade is everything. The specimen was simply flawless and thus rose from its starting price of 4,000 euros to 12,000 euros.

Auction 261: Schleswig-Holstein and Denmark, Saxe-Altenburg as well Coins and Medals from Medieval and Modern Times

The chance to write the catalog of an extraordinary collection is considered a special highlight by every writer of auction catalogs. Kurt Zentini e. a. collection was extraordinary, indeed. Zentini had dealt with Schleswig-Holstein and the Kingdom of Denmark as the historically so closely intertwined neighbor. His collection comprised 400 lots. They were auctioned off for 600,000 euros, about 66 % above the pre-sale estimate. Many remarkable hammer prices were obtained. Saying that, it should not be forgotten, that collections like this sometimes offer much history for little money. Hence it took the lucky winner only 32 euros to acquire two groschen from 1602, struck in the name of John Adolf of Holstein-Gottorp. Other items of course obtained higher prices, like a 1536 gold gulden following the model of the Rhenish type, struck in Schleswig by King Christian III. The hammer fell at 15,000 euros. Its estimate had been 10,000 euros. Special collections always have a surprise in store. After all, they attract the true connoisseurs who know well how many years it would take them to find a similar item on the market again. Because of that, an inconspicuous double shilling from 1523 graded very fine, struck in Schleswig, rose from 600 to 5,000 euros. 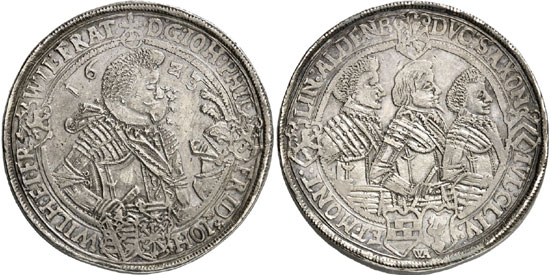 The Konrad Bretschneider collection featuring coins of the Duchy of Saxe-Altenburg was next. We guess the collector was rather pleased with the result: the total estimate of 100,000 euros made way for a hammer price adding up to 160,000 euros. This special collection, too, sprang some of those typical surprises of which we can only mention the most impressive at this point: an extremely rare double reichsthaler, struck in Saalfeld in 1623, graded very fine to extremely fine, that had carried an estimate of 4,000 euros, only to be auctioned off for four times that sum, hence 16,000 euros in the end.

It was an unexpected bombshell, that hammer price obtained by the marvelous Siculo-Punic tetradrachm with the female head wearing the tiara. Everybody had noticed the incredible piece of best Greek style. One was willing to spend 180,000 euros. The estimate of 25,000 euros became a matter of minor importance.

That, however, was by no means the only good result. The Archaic stater from Kaulonia, once part of the Prospero Collection, with advancing Apollo – in high relief on one side and incuse on the other – had been estimated at 25,000 euros. It was auctioned off for 32,000 euros. Slightly more expensive was the tetradrachm from Naxos of Classical style. Starting with the same estimate, it arrived at 34,000 euros in the end. A real surprise was the result of a very rare, extremely fine tetradrachm of Ptolemy IV. It was one of the rare Egyptian examples of an exceptionally good style which made the price rise quickly, from 10,000 to 48,000 euros.

Two factors determine the price of coins from the Roman Republic: firstly, rarity and, secondly, grade. Every single result this outstanding collection achieved can vouch for the truth in that. A telling example was the anonymous denarius featuring the extremely rare mint mark star with five beams. As a result, the bidders did not rest at 300 euros for very long but reached 1,900 euros almost immediately. The much sough-after denarius of L. Atilius Nomentanus likewise did not stop at the estimate of 2,000 euros. It changed hands for 4,000 euros. Admittedly, that did not come as a surprise – contrary to the result of the denarius of C. Fundanius with the depiction of the triumphator riding in a biga: on an estimate of 200 euros, it obtained 2,000 euros, which astonished even die-hard collectors. Even more spectacular is what the extremely rare denarius of the Italic tribes yielded. Being only slightly off center and ‘just’ extremely fine it was so rare that the collectors made the starting price of 2,000 euros turn into a hammer price of 22,000 euros. While rarity was the crucial factor there, it was its beauty that heaved the admittedly quite often encountered aureus of C. Julius Caesar from its estimate of 5,000 euros to its hammer price of 24,000 euros. Obtaining 157,500 euros, the aureus of Sextus Pompey with the portraits of his father and his brother became the second most expensive item of the entire auction. 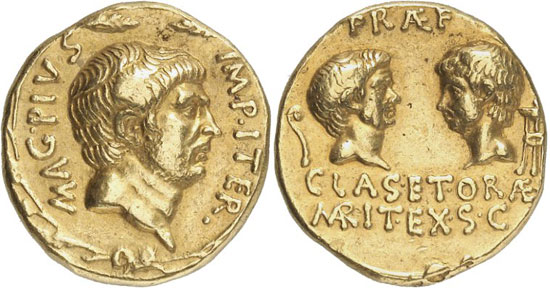 The Byzantine gold coins likewise benefit from this trend. 5,500 euros for a perfect solidus of Justinian II featuring the bust of Jesus Christ on its obverse are truly remarkable (estimate: 3,500 euros), as are the 17,000 euros for an extremely fine solidus of Empress Irene (estimate: 9,000 euros).