Künker Auction House heads into this year’s upcoming fall auctions with three catalogues and approximately 5,500 lots, with an overall estimate valued at 6.5 million EUR. It’s an extensive offering with something for everyone. However, estimates in the double and triple-digits will barely raise an eyebrow in Osnabrück – the excitement will be reserved for the 17 items that sit beyond the 25,000 EUR mark, including a Romanian gold coin of 100 lei estimated at a lofty 80,000 EUR, a Ptolemaic oktadrachm estimated at 75,000 EUR and a Norwegian speziesthaler estimated to bring in a tidy 50,000 EUR.

Catalogue 216: Between the first item of auction 216, a very rare Celtic quarter stater from Britannia (Estimate: 250 EUR), and the final multiple lot of four drachms from the Indian Kshatrapas (75 Euro) there are another 1,638 lots assembled under the “Coins from the Ancient World” category. As always, the auction counts Celtic, Greek, Roman (republic, imperators, imperatorial, emperor), Migration Period, Byzantine, as well as Crusader and Oriental items among its assembled offerings. The overall estimate of just short of three million EUR, as exorbitant as this may seem, is quite likely not even to be close to enough; the offerings are that exquisite. 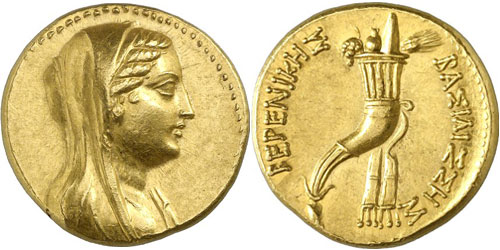 Lot number 570 in the Aegyptus section features an oktadrachm of Ptolemy III (246-222 BC) estimated at 75,000 EUR, which was minted in Alexandria for Berenice II. The very rare coin is an extremely fine showpiece that has already been a part of various prestigious collections. As is customary with Künker, the history behind the coin is presented in the catalogue in further detail (see www.kuenker.de). Among the other numismatic heavyweights from antiquity: a stater 380/370 from Panticapeum (40,000 EUR), an aureus 41/45 of the Roman Emperor Claudius for Nero Claudius Drusus (30,000 EUR) and one more of Didius Iulianus from the year 193 (30,000 EUR).

Catalogue 217: 2,639 lots of “Coins and Medals from Medieval to Modern Times” together account for an estimated 1.8 million EUR. The auction will be held from October 9th-11th, from Tuesday afternoon to Thursday afternoon, and looking through it broadly, the auction week offers up several medieval highlights. Among them, a bracteate of the Bohemian regent, Vladislaus II (1158-1173) from the Bautzen or Görlitz mint, listed at 5,000 EUR. Another high point is the absolutely rare Louis the Pious (814-840) denarius from Treviso, offered at twice the previous estimate, at 10,000 EUR. During the penny time, it was only silver that was minted, but on one occasion, Louis also treated himself to a gold coin. With the legend MVNVS DIVINVM, the coin is an “expression of the still relatively young Carolingian Empire’s claim to power over Byzantium” (catalogue text). This rare solidus (in the gold catalogue 218) is now listed at 20,000 EUR in Osnabrück. 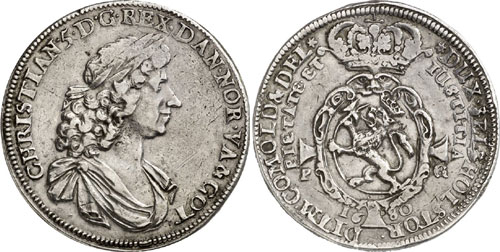 The Norwegian speziesthaler estimated at 50,000 EUR, referred to above, was minted in Christiana in 1680 by minting authority Christian V. The following items stand out with estimates of a comparatively low 10,000 EUR each: a 1644 triple imperial thaler from Kremnitz, a 1755 Frederick the Great eightfold groschen from Cleves and an 1840 fine silver thaler of the Hannoverian Ernst August. A very rare 1537 thaler in excellent condition of the Hanseatic city of Lübeck is estimated at only 5,000 EUR. Also in this price range is a 1755 Saxon imperial thaler, patinized, FDC and particularly rare (5,000 EUR).

There are also some items to be found for somewhat less than this estimate range (and these are merely examples from Künker’s extensive offering), such as an 1869 double convention thaler of the Bavarian King Louis II (4,000 EUR) a Frankfurt double gulden from 1849 of the election of the Prussian King Frederick Wilhelm to “Emperor of the Germans” (3,000 EUR). There are also treasures to be discovered several price ranges beyond this, such as an 1803 silver medal from Mulhouse / Thuringia of the convention with Prussia (100 EUR), 5 sols from 1793 besieged Mainz (75 EUR) or a kipper-kreuzer by Kempten, undated, which is offered along with a Ravensburg copper penny (50 EUR).

Catalogue 218: The auction week’s third catalogue is divided into two parts. It comprises about 900 gold pieces from all over the world (overall estimate: 1.5 million EUR) and more than 300 lots of German coins from 1871 on (overall estimate: almost 400,000 EUR).

The 100 lei coin of the Romanian king Charles II from 1939 is the most highly valued of the items, with an estimate of 80,000 EUR. Expectations are “only” half as high for the precisely 100-years-older five pound coin of Britain’s Queen Victoria, as well as for the 100 lira coin of King Humbert of Italy from 1880. All three gold pieces are extremely rare and particularly attractive. A 1642 quadruble (quadruple écu pistolet) of the city of Genf has a similar estimate of 20,000 EUR, as does a tenfold 1648 ducat of Ferdinand III from the Prague mint, and a bank portuguez of ten ducats of the city of Hamburg from 1689.

Although Lot 5579 is also set at a very substantial estimate of 75,000 EUR, it consists of two coins: 50 dollar 1915 coins made for the Panama Pacific International Exposition, in both round and octagonal varieties.

So that’s it – for the time being at least – since Künker is holding another two auction days on the 30th and 31st of October. That program will feature portions of the Hagander Collection (Sweden and its territories) and the Vogel Collection (gold), as well as the Mercator Collection (Hesse) and pieces from Russia.

More information about the auction is available by mail from Fritz Rudolf Künker GmbH & Co. KG, Gutenbergstr. 23, 49076 Osnabrück. Order their free catalogue today by phone at 0541 / 962020 or by Email at .