The Bank of Korea will issue a set of three silver coins which highlight and focus attention on Korean culture and heritage. Entitled “Korean Cultural Heritage commemoratives” the series of twelve-sided coins includes one coin which features the Hwaseong (Brilliant Castle) Fortress In Suwon – the second includes an image of the Changdeokgung Palace (meaning Prospering Virtue) in Seoul and the last coin features a design which promotes the Hangeul or, the Korean alphabet. 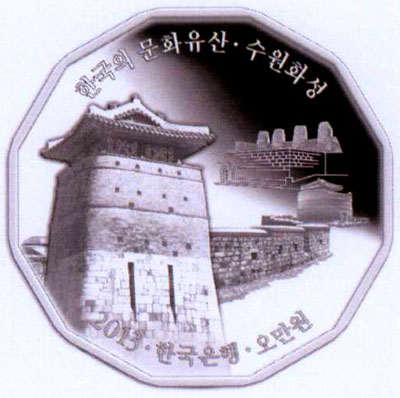 Hwaseong Fortress: A wall surrounding the center of Suwon, the provincial capital of Gyeonggi-do in South Korea. The fortress was built from 1794 to 1796 by King Jeongjo of the Joseon Dynasty to house and honor the remains of his father Prince Sado. Located 30 kilometers or 19 miles south of Seoul and enclosing much of central Suwon, the Fortress includes King Jeongjo’s palace Haenggung. The site was designated as a World Heritage site by the UNESCO in 1997. 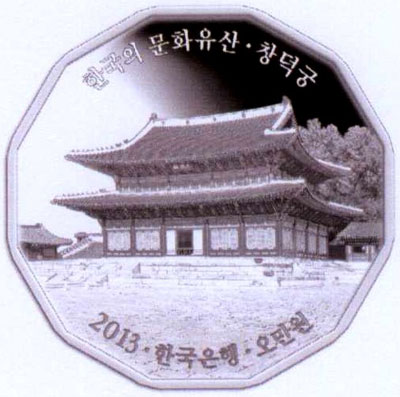 Changdeokgung Palace: Set within a large park in Jongno-gu, Seoul in South Korea. It is one of the “Five Grand Palaces” built by the kings of the Joseon Dynasty (1392–1897) Changdeokgung was the most favored palace of many Joseon princes and retained many elements dating from the Three Kingdoms of Korea period that were not incorporated in the more contemporary Gyeongbokgung Palace. It, like the other Five Grand Palaces in Seoul, was heavily damaged during the Japanese occupation of Korea from 1910 to1945 and as a result, only about 30% of the pre-Japanese structures survive. Changdeokgung was added to the UNESCO World Heritage List in 1997. 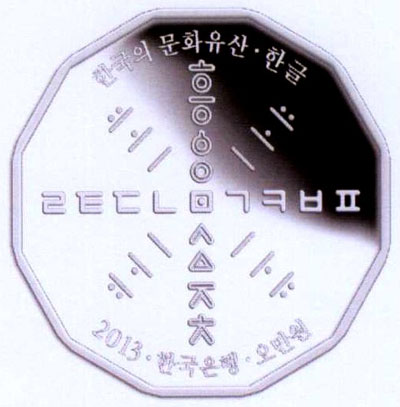 Hanguel: The Korean alphabet on the Korean peninsula and also the native alphabet of the Korean language.It was created during the Joseon Dynasty in 1443, and is now the official script of Korea, and co-official in the Yanbian Korean Autonomous Prefecture of China’s Jilin Province. In Southern Korea, Hangul is sometimes augmented by Chinese characters, called hanja, whereas in Northern Korea, hanja is virtually nonexistent. Hangul is a featural alphabet of 24 consonant and vowel letters. However, instead of being written sequentially like the letters of the Latin alphabet, Hangul letters are grouped into blocks, each of which transcribes a syllable. Hangul may be written either vertically or horizontally. The traditional direction is from top to bottom, right to left. Horizontal writing in the style of the Latin script was promoted by Ju Si-gyeong (1876 – 1914) one of the founders of modern Korean linguistics, and has become overwhelmingly prevalent. 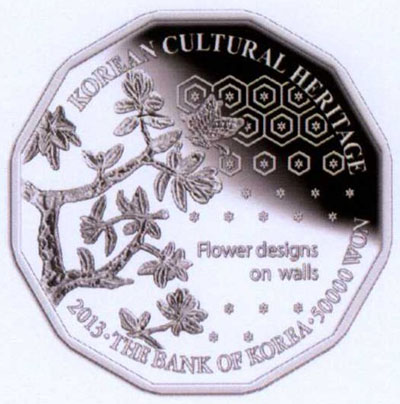 All three coins share a common reverse which includes a design comprising flowers which are seen on the walls of Jagyeongjeon Hall (The Queen’s Residence) of Gyeongbokgung Palace – which is located in Northern Seoul, the flowers representing traditional Korean beauty and elegance.

The Bank of Korea will release the coins to the Korea Minting and Security Printing Corporation (KOMSCO) on the 27th December and authorize the sale of the coins through their distribution and sales outlets. A total of 54,000 sets have been reserved for domestic sales and 6,000 sets for international or overseas collectors.

Interested collectors should visit the website of KOMSCO at: http://english.komsco.com/contents/product/product_0401.do to apply on-line for an allocated set of coins – it appears that international orders can and will be fulfilled.