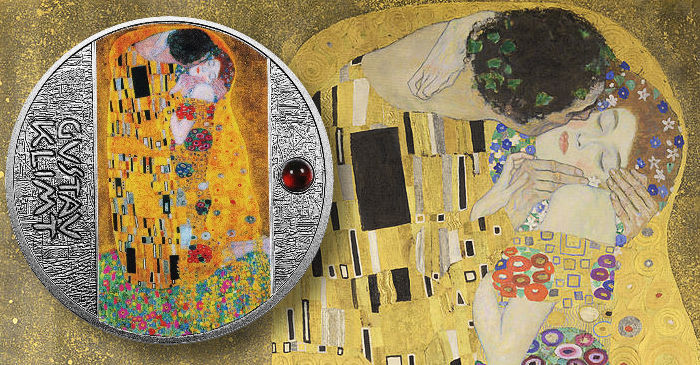 Gustav Klimt (1862-1918), an Austrian symbolist painter, was a founding member of the Art Nouveau and Vienna Secessionist movements — both of which were reactions against the more traditional style of 19th-century art.

Art Nouveau was a decorative style of art seen not only in paintings but in architecture, advertising, jewelry, and many other forms that were inspired by natural forms and structures. The Secessionist movement in Vienna was related to Art Nouveau and largely synonymous with modernism, a trend that spread across European countries, especially between 1890 and 1910.  Secessionism embraced the influence of foreign art on the artistic life of Vienna in the late 19th and early 20th centuries and the pure artistic character of art as opposed to its commercial role. Klimt himself was influenced, in particular, by Japanese art. 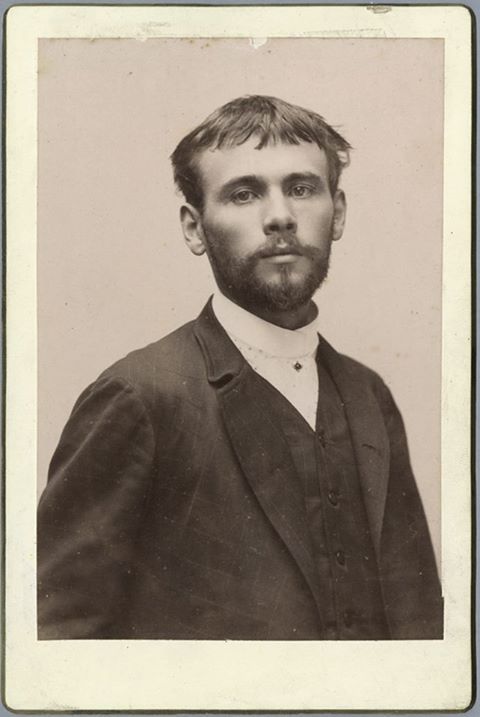 Klimt was the son of a gold engraver father and an opera singer mother and one of seven children. The influence of his father’s profession is very evident in his golden period works that used gold leaf paint, including his very famous 1907 portrait of Adele Bloch-Bauer that was commissioned by her husband, a banker and sugar producer. 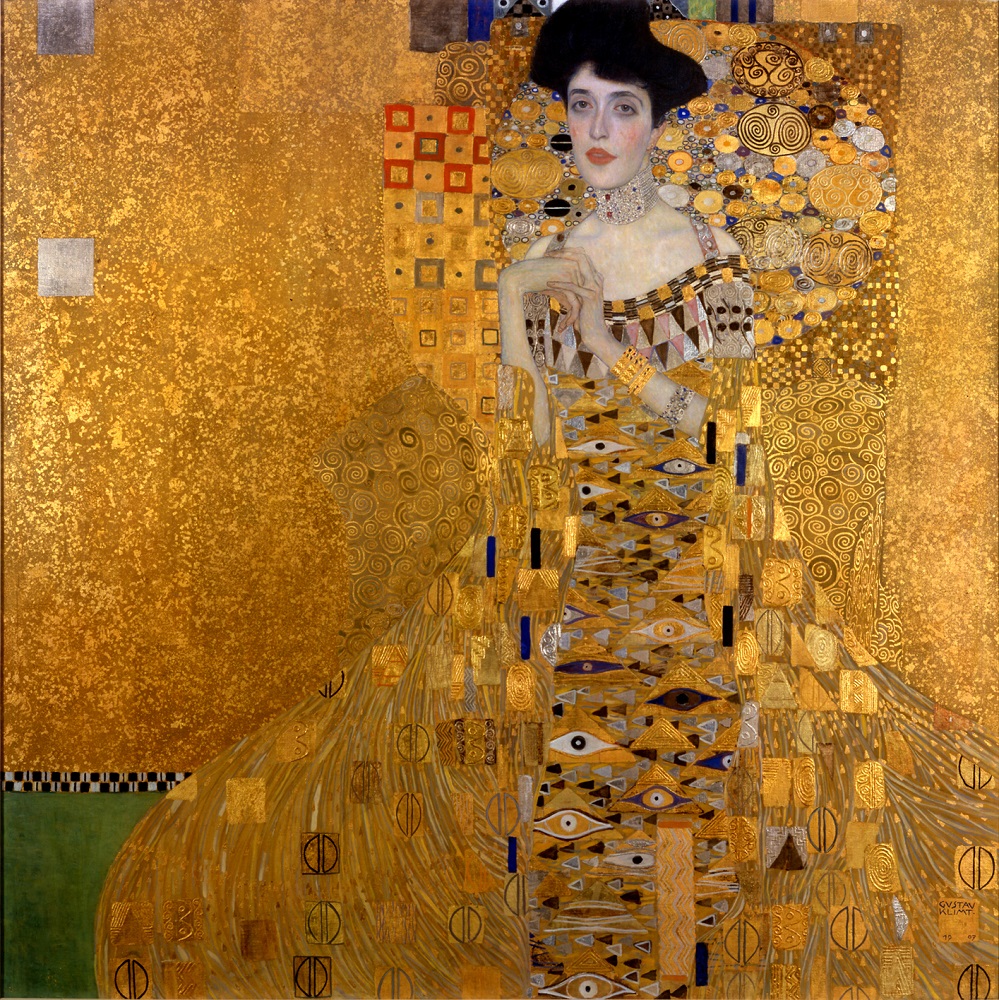 The painting was made famous to those not already familiar with Klimt’s ground-breaking art in the 2015 film, Woman in Gold. It was stolen by the Nazis in the run-up to the Second World War and later resided in a Vienna museum, but the painting was eventually returned to its rightful heir after a protracted legal battle. In 2006 it sold for $135 million — the highest amount ever paid for a painting at the time.

Modern world coins that feature well-known paintings by some of the most celebrated artists from different periods and styles of art have long been popular with collectors of non-circulating legal tender coins. Those collectors are not focused on stacking precious metals or buying hyped-up issues for a quick flip but want well-made pieces that depict art they would normally only see in a museum. 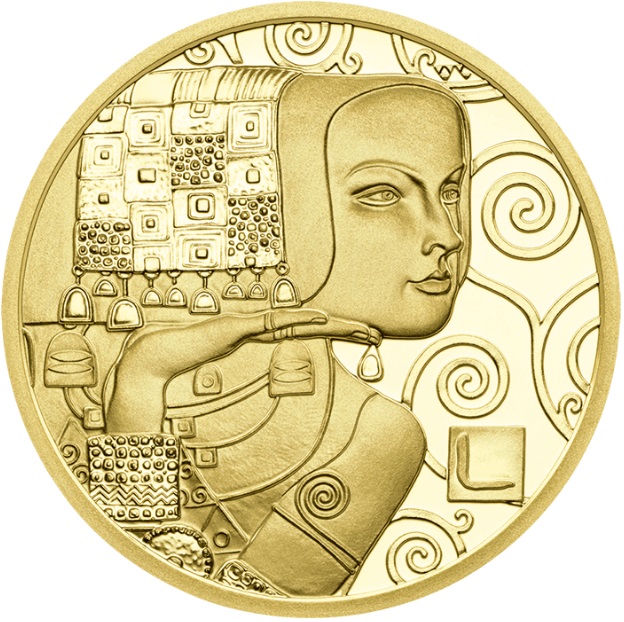 Klimt’s art has appeared on a number of coins, especially those issued by the Austrian Mint, such as the five-piece set of 10-gram gold Proof coins issued between 2012 and 2016 which focused on the artist’s golden phase and won several Krause Coin of the Year awards. Each coin, which sells today for around $700 each, was designed by the mint’s most experienced artists and was struck with great care and precision — hallmarks of the mint’s coins for centuries. 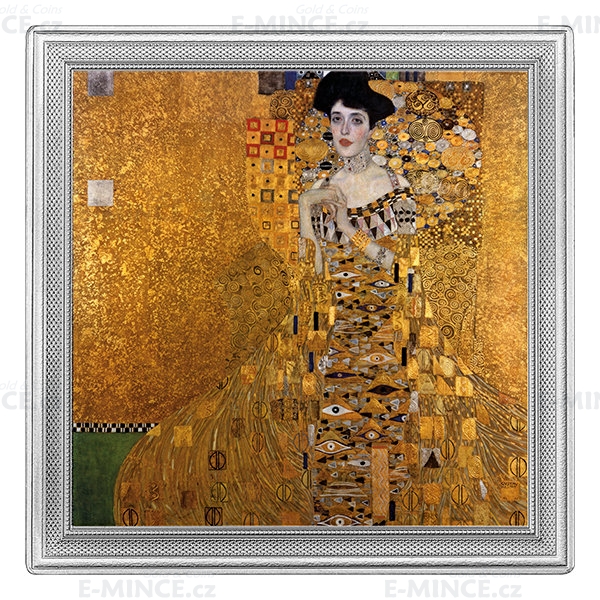 There is also a 2015 Niue two-ounce colorized silver Proof of the Bloch-Bauer golden portrait that is square-shaped and difficult to locate today, and a 2017 coin from the Polish Mint on “Motherhood in Art” struck for Cameroon that weighs one ounce of silver and has a 50-millimeter diameter. Like the square Niue coin, this one comes housed in a floating display frame that shows both sides of the coin. 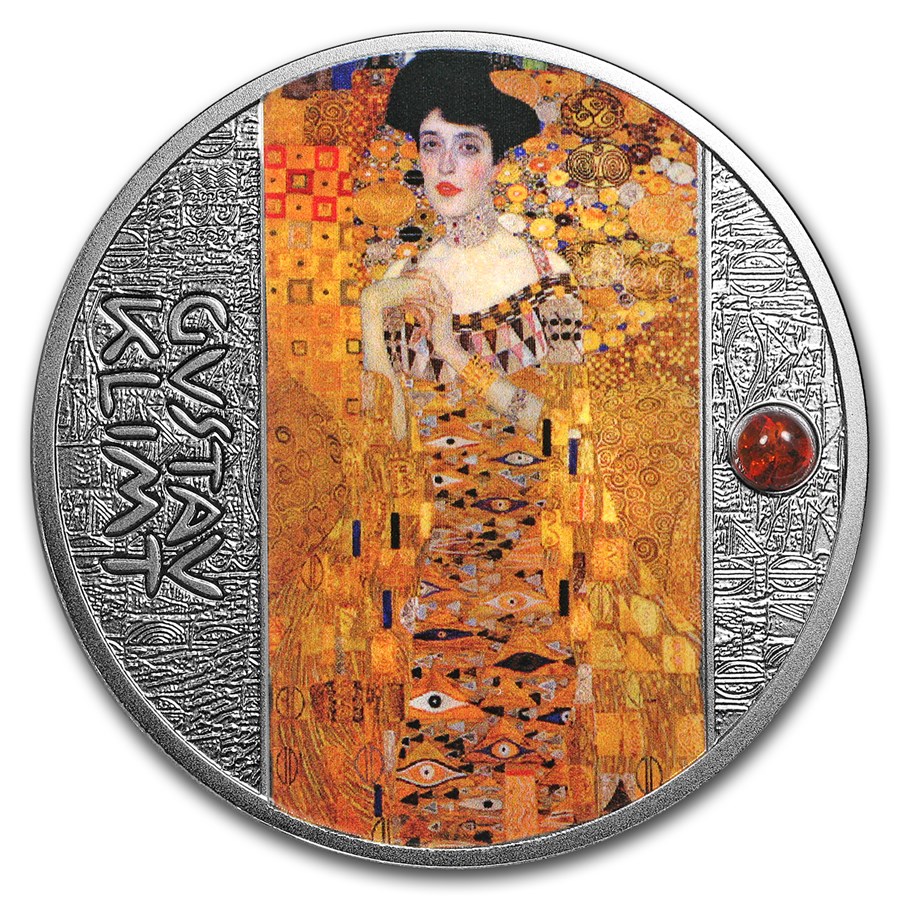 2018 marks the centennial of Klimt’s death. To mark the occasion, a five-coin series called “The Golden Five” was produced by the Polish Mint that focuses on some of the artist’s most well-known works. The series is a good example of coins with large diameters made of much less metal than one would expect based on their size, which helps make them accessible to more collectors. Each of these pieces is made of just a half ounce of silver (.545 ounces) and includes a small Polish amber insert, a diameter of 50 millimeters, and a mintage of 555 pieces. The large diameter, especially for a coin of this weight, provides enough space for detailed, colorized renditions of the paintings, while the weight of the coin helped to keep their cost reasonable at around $100 each ($90-$110 depending on where they’re purchased). Additionally, each coin comes housed in a floating frame ideal for display purposes, which typically run $15 or more when purchased without a coin. 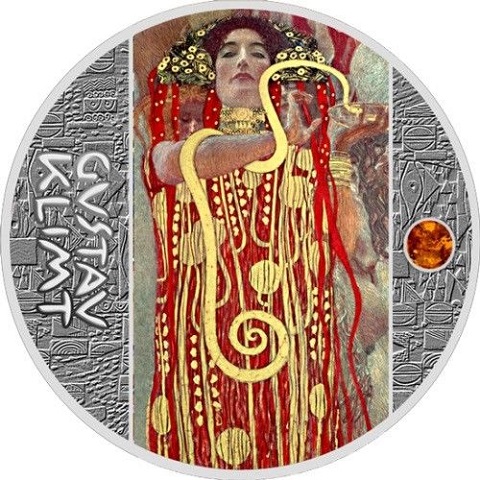 The five Klimt works are depicted on the reverse of the coins, which have been a strong seller on eBay and at various coin dealers. They are: Woman in Gold; The Kiss that celebrates love; Medicine, the goddess of health and cleanliness, Hygeia; Tree of Life that shows swirling trees, a female, and an embracing couple; and the forthcoming Golden Apple Tree, notable for its geometrical forms. 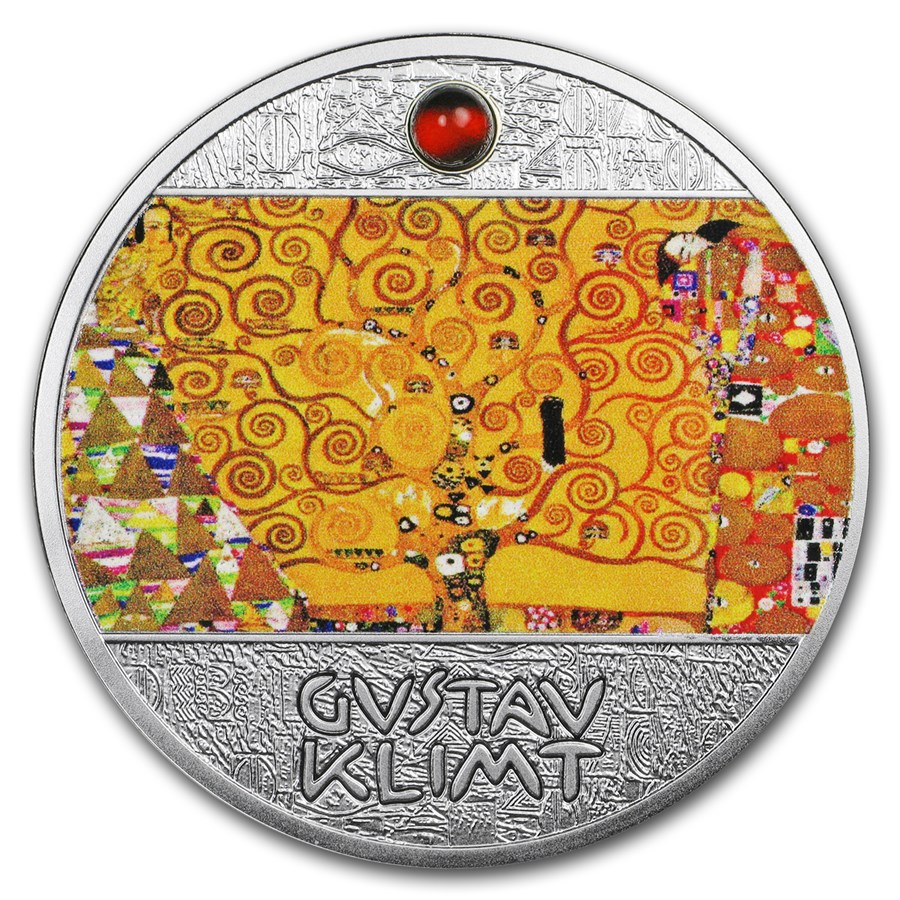 The paintings take up about two-thirds of the reverse canvas with decorative design panels on each side, or above and below the art for others, with the amber insert in one panel and the artist’s name inscribed on the other panel. 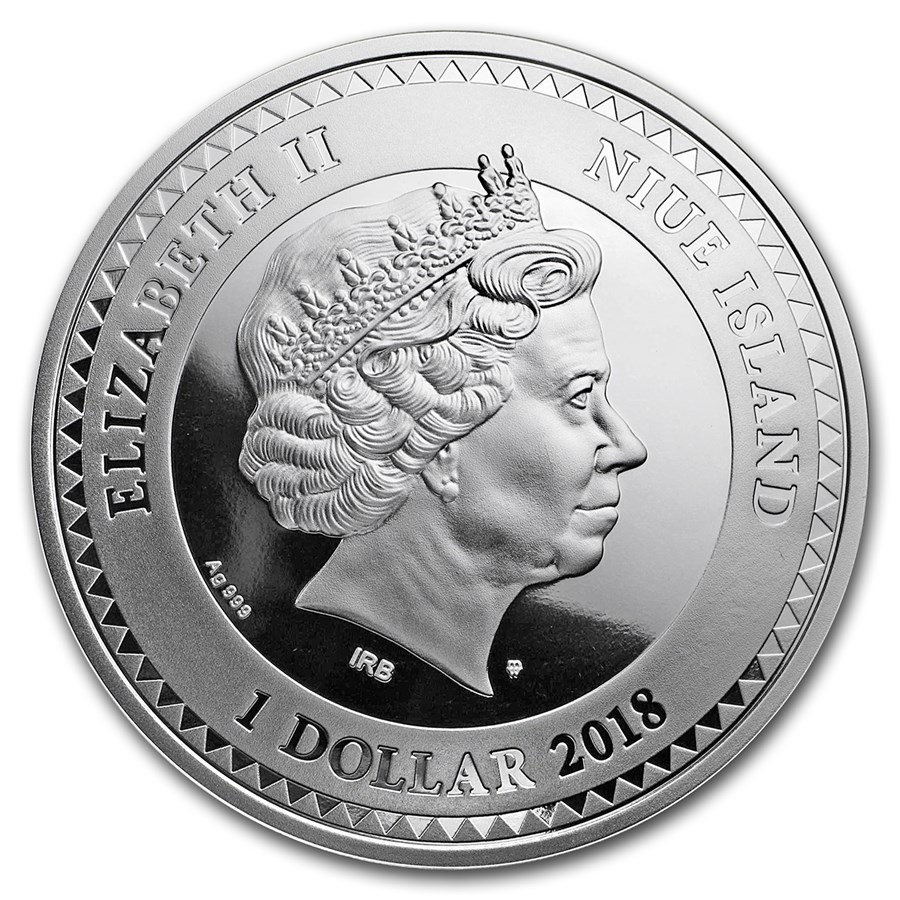 The common obverse design for the 2018 Niue coins.

The obverse of each coin features the Ian Rank-Broadley effigy of Queen Elizabeth II, plus inscriptions for the issuing country, monarch, date, and $1 denomination. 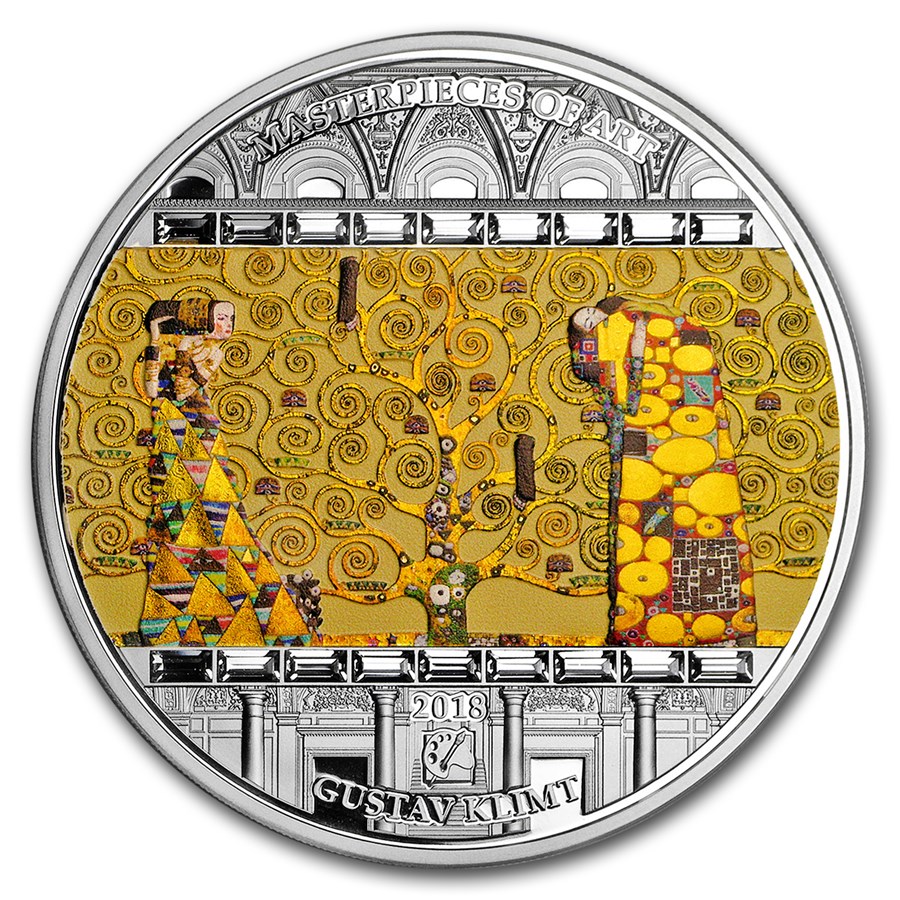 In addition, The Tree of Life is also celebrated on a recent three-ounce silver Proof decorated with 18 Swarovski crystals on the long-running Cook Islands’ series “Masterpieces of Art.” This coin has a mintage of 1,759 units, a diameter of 55 millimeters, and runs at least $320 (depending on where it’s purchased).

Considering that the Niue series is only slightly smaller in size than the Cook Islands issue and features colorful depictions of the five famous works in high quality, yet costs much less and has a much lower mintage than the larger coin, it is not hard to understand why the five-coin set is so popular. It would not be surprising if several years from now that these coins, like some of the others that depict the art of Klimt, are difficult to source.


Klimt was an artistic visionary and his work was well ahead of its time in its modernist style and its embrace of unconventional forms, which clashed with the turn-of-the-century social mores of Vienna and Europe. It is now widely embraced and celebrated for its brilliance and singular style, serving as an inspiration for countless artists. It is also a very fitting subject for modern world commemorative coins. These are coins meant to be displayed and enjoyed to spur the collector to learn more about the artist and his art.

For more about Klimt, two useful websites are the Gustav Klimt Museum (a virtual museum) and Gustav Klimt — The Complete Works (which has the artist’s complete works).

Louis Golino is an award-winning numismatic journalist and writer specializing primarily in modern U.S. and world coins. His work has appeared in Coin World, CoinWeek, The Numismatist, Numismatic News, and COINage, among other publications. His first coin-writing position was with Coin Update.