The Royal Mint have officially launched (25th May) their latest contributions to the national and international celebrations of the Queen’s Diamond Jubilee celebrations, set to commence from the 2nd June. The gold and silver coins, weighing in at one kilo each, are part of an overall series of coins issued to celebrate this momentous British occasion. The series has ranged from crown sized coins with a face value of five pounds to these latest issues with a gold coin carrying a face value of 1000 pounds, one of the largest denominations ever produced and issued by the Treasury of the United Kingdom, which required a special parliamentary bill enabling these coins to acquire legal tender status. 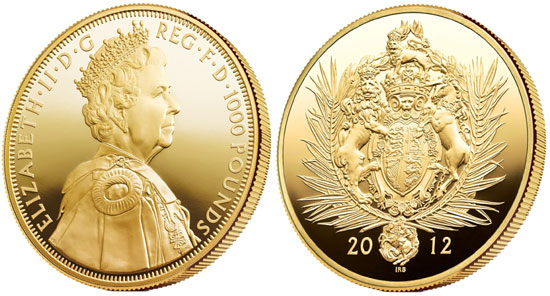 Both the gold and silver coins depict an impressive and regal rendition of the Royal Coat of arms on the reverse. Sculpted by the respected and eminent artist Ian Rank-Broadley, whose past works include the recent reverse designs for both the five pound and ten pound Diamond Jubilee coins as well as the current circulation portrait of the Queen in use since 1998, the design utilizes the Royal crest with heraldic image, complete with the lion and unicorn supporters and surrounded with branches of laurel. Underneath, a detailed representation of St. George slaying the dragon hangs between two numerals on either side, denoting the year of issue “2012”. Struck with a process which results in a deeper relief than any other UK coins produced, the image of the coat of arms and branches are sharp and contrasting.

The obverse of the coin depicts the Queen wearing the robes of the order of the Garter, one of the oldest orders of chivalry and an honor only bestowed on the recipient by the Queen herself. She is wearing Queen Mary’s Tiara, a wedding present to the Queen from her Grandmother in 1947 and previously portrayed on British and commonwealth coinage from 1964. The text “ELIZABETH II D G REG F D 1000 POUNDS” (500 pounds for the silver) is positioned around and over the primary design. 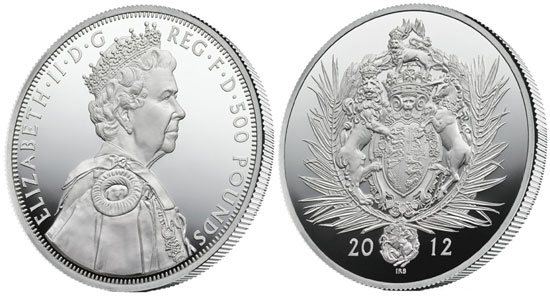 Each coin is struck to a proof quality and has a weight of 1000 grams with a diameter of 100 mm. The limited number of pieces for the pure .999 fine gold coin is set at just 60 examples making it one of the smallest official mintages for British coinage. The pure .999 fine silver example is limited to 1,250 pieces.

The Queen’s Diamond Jubilee Gold UK Kilo Coin is housed in a case made of sweet chestnut wood from the trees at Great Windsor Park, the Crown Estate of Windsor Castle, one of The Queen’s private homes. The Diamond Jubilee Silver UK Kilo Coin is presented in a blue faux leather case and both come with an illustrated booklet, numbered plaque and a numbered Certificate of Authenticity.

For more information on these and other coins offered by the Royal Mint, please visit their website at: http://www.royalmint.com/features/the-queens-diamond-jubilee-kilo-coins