From 1916 to 1947 the half dollar denomination featured the Walking Liberty design of Adolph A. Weinman. This type was struck in large numbers for most of the years at the various Mints in use at the time. While most coins of the series are readily available in circulated condition and not all that difficult to find in uncirculated condition, there are some scarcer issues that are difficult to find and become rare to very rare at the gem uncirculated level. This article will discuss those key-dates and semi key-dates of America’s iconic half dollar, popular with the American public and ardently pursued by both novice as well as experienced collectors.

While the first year of issue Walking Liberty Half Dollars are not necessarily rare, none are particularly easy to find in uncirculated condition, with the 1916-S being the most difficult, having a mintage of 508,000 pieces. The Philadelphia issue of that year has a mintage that’s only slightly larger at 608,000 pieces, although it appears that many more Philadelphia coins were saved near the time of issue, as that date is more readily available in gem condition. The San Francisco issue, however, is a different story and it remains a date that is very difficult to find certified at the gem level.

The first San Francisco issue of the next year, 1917-S with the mintmark located on the obverse, is generally considered to be one of the key dates of the series, despite a generous mintage of 952,000 pieces. Even fewer pieces were saved than the previous year, and the majority of examples encountered in the marketplace are very well worn, with those at the higher circulated grade levels being rare. In gem condition this is one of the most difficult of the early issues, although in general very few of these early dates survive in the finest grades.

The 1919-D is another scarce date which is generally available in well circulated grades (thanks to a mintage of 1,165,000 pieces) but which becomes rare in uncirculated condition and extremely rare at the gem level, where in fact it is usually considered to be the rarest Walking Liberty Half Dollar. The striking quality of this issue is among the worst in the series and virtually the entire mintage was promptly released into circulation with very few pieces saved. Those that were saved in uncirculated condition were often mishandled, resulting in just about a dozen or two true gems presently available to serious collectors. This issue represents a true condition rarity and at the gem level represents perhaps the rarest 20th century half dollar. 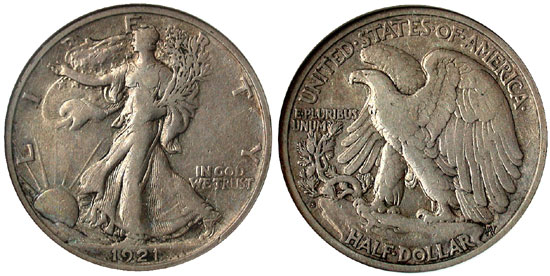 The 1921 issues have the lowest mintages of the series, as production of silver coins at all mints focused on the silver dollar, first of the Morgan Dollar design and thereafter of the new Peace Dollar. The Philadelphia Mint had a total output of 246,000 half dollars, which is the second lowest of the series right after the Denver issue of the same year. While this makes survivors scarce in all grades and rare at the gem uncirculated level, some pieces were saved at the time, making it expensive for a Philadelphia half dollar of the 1920s but not much more expensive than some of the higher-mintage branch-mint issues of the same decade.

As mentioned above, the 1921-D Walking Liberty Half Dollar had the lowest mintage of the series, with a total output of just 208,000 pieces. The majority of these were released into circulation but luckily enough some were saved, making it a coin that is easier to find in gem condition than the 1921-S, despite the latter having a higher mintage. That said, like all the 1921 Half Dollars this is definitely not an easy coin to find, and the low mintage guarantees that this is the same in both well-circulated grades as well as uncirculated condition.

While the 1921-S has the highest mintage of the three low-mintage half dollar issues of the same year (548,000 pieces were produced and released into circulation), it is the one that is the most difficult to find in gem uncirculated condition, only slightly more available than the 1919-D at the gem uncirculated level (although the difference is only marginal). Because of its rather generous mintage compared to the other issues of the year, well-circulated issues are easily found, but it becomes much more difficult in Very Fine and Extremely Fine condition, grade levels in which the 1921-S is generally considered to be the true key-date of the series. 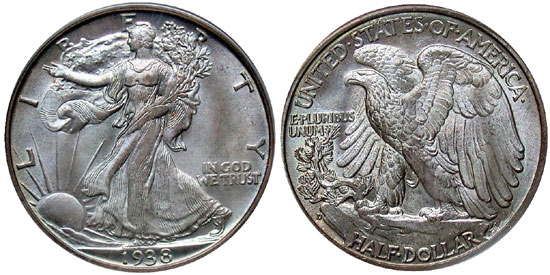 The 1938-D Walking Liberty Half Dollar is one of the few issues of the series that had a mintage of less than half a million at 491,600 pieces, representing the third lowest figure of the series. Although the issue does sell for a healthy premium over other more common dates of the 1930s, it is not the rarest coin of the era at the gem level. By the mid 1930s, collectors had become more astute at saving lower mintage coins for circulation, making this date more available than the mintage might suggest.

The 1941-S is a very curious issue. While its mintage of 8,098,000 pieces is only slightly lower than the average half dollar mintage of the last 15 years of the series, it is still generally considered to be a semi key-date. The reason for this can be found in the way the older coin albums were put together, which split the Walking Liberty Half Dollar set in two parts. The first album contained the coins dated 1916-1940 while the second album finished the series with the coins dated 1941-1947 (which later became the so-called “short-set”). The second album contained mostly common coins, of which the 1941-S had the lowest mintage, and it was soon heralded as a “rare date”, even though specimens are abundant in all grades. Because of the popularity of the short-set, however, it still sells for a premium over other late-date issues.

While none of the other issues in the series are generally considered to be key-dates or semi key-dates, many of those dated before 1934 are very scarce in uncirculated condition. These often become rarities in certified gem condition, at which point they are very difficult to find and sell for five-figure sums at public auction. In circulated condition, however, all the other dates are readily available at little to no premium over the silver value, with a few minor exceptions. This makes a set a fun but still challenging endeavor to undertake, and it has made the Walking Liberty Half Dollar series one of the most popular 20th century coin series to collect.