The Washington Quarter was designed by John Flanagan in 1932 to commemorate the 200th anniversary of the birth of America’s first President. Originally meant to be a one year commemorative issue, the obverse design has continued in use (amidst some modifications) to this day. During the years of the State Quarter Program, many collectors looked back to the older Washington Quarters (mainly those struck in silver from 1932 to 1964) and noticed that it was a an achievable goal to put together a set in uncirculated condition, with a few exceptions in the 1930s. In circulated condition the set is fun and surprisingly easy (especially compared to the previous series, the Standing Liberty quarter), with many pieces from the 1940s and 1950s selling for just their silver value in circulated grades. This article will take a look at some of the scarcer silver Washington quarters that both novice as well as experienced collectors will encounter when putting a set of these together.

The first year of issue Washington Quarter was struck at the Philadelphia, Denver and San Francisco Mints, with both the 1932-D and 1932-S generally considered to be the key dates of the series. The 1932-D had a mintage of 436,800 pieces, many of which went into circulation. In uncirculated condition it is by far the scarcest Washington Quarter, even scarcer than the 1932-S which had a slightly lower mintage. For no apparent reason the San Francisco issue was put aside in greater numbers, and is now somewhat more available in most grades. As for the 1932-D, most tend to show signs of circulation, although well-circulated pieces are not all that common either. The finest known 1932-D Washington Quarter, a piece certified by PCGS as MS-66 sold for a record $143,000 in 2008, the most expensive regular issue Washington Quarter ever sold at public auction. 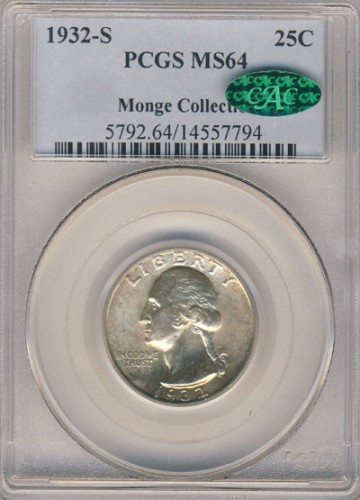 As mentioned above the 1932-S is the other key-date of the silver Washington Quarter series, with a mintage of 408,000 pieces, the lowest mintage of any Washington Quarter and in the top-6 of the lowest mintage 20th century quarters. Its low mintage was soon realized by collectors, whom had a hard time picking up pieces out of circulation only a few years after their mintage. This caused prices to be relatively high from the start, as both the 1932-D and 1932-S were often lacking from albums of coins that people put together straight from circulation. Despite this, however, in circulated condition the 1932-S is about equally as scarce as the 1932-D mentioned above. In uncirculated condition the coin is easier to find, although gem uncirculated pieces or finer remain very scarce and in demand.

No Washington quarters were struck in 1933, but production of the same design resumed in 1934 despite initial plans to make it a one year commemorative coin. The Philadelphia Mint struck almost 32 million pieces, the highest mintage of any quarter at any Mint up to that date, but the Denver Mint struck a considerably lower number, with the 1934-D having a relatively low-mintage of 3,527,200 pieces. While this date is not that hard to difficult to find in circulated condition, uncirculated pieces are scarce and gem uncirculated pieces are only passed in rarity by the 1932-D and 1932-S issues. It appears that very few rolls of uncirculated quarters were saved by collectors and dealers, probably because of the high face value of $10 for each roll of quarters, a considerable sum of money at the time.

The 1936-D shares a similar story to the 1934-D, and before the advent of third-party grading it was generally considered to be scarcer than the 1934-D in gem uncirculated condition, although present populations seem to indicate that the 1934-D is just a tad more difficult to find at that level of preservation. While commonly encountered in circulated condition and trading at just a little bit over their silver content, uncirculated examples are very scarce and not all that easy to find, despite a mintage of 5,374,000 pieces. Why this date is so much more difficult to find in uncirculated condition than the lower mintage 1935-D remains unclear. The most likely scenario is that one or more individuals noticed the relatively low-mintage of the 1935-D and put a few rolls of uncirculated coins away, which later came to the market. 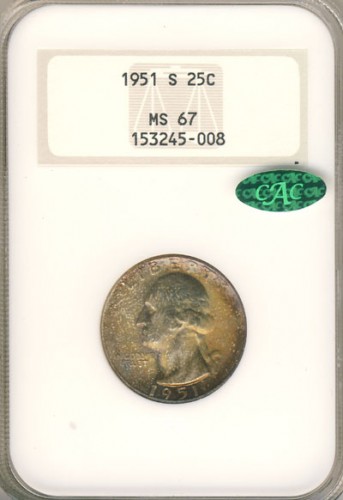 As mentioned above, the 1935-D is generally considered to be a semi key-date within the series as well, although one has to go up to the higher uncirculated grade levels to find it more difficult to find than the other mintmarked quarters of the 20th century, which are all about equally as scarce. Most issues of the 1940s are readily available even in gem uncirculated condition, although some dates become scarce in MS-66 and MS-67 (such as the 1942-S). The same applies to the Washington Quarters of the 1950s, most of which had tens of millions struck. Those that did have lower mintages (below ten million) were generally noticed by collectors, dealers and investors and put away in uncirculated grades. These dates are the 1951-S, 1955-D and 1958, all which are generally available in uncirculated grades. The 1955-D is the scarcest of this group and is priced at several multiples of other dates in gem or finer.