The Peace Dollar was struck from 1921 to 1935 and while not as extensive of a series as its predecessor, the famous Morgan Dollar, it is still a series that has a few tougher dates. The type was designed by Italian-born Anthony de Francisci, who used his wife as a model for the portrait of Liberty on the obverse. The Peace Dollar series is very accessible and popular with no extreme rarities and the majority of dates are regularly encountered in most grades, although there are a few dates that present more of a challenge. In this article we will take a look at some of the more difficult dates that a collector of this series will encounter towards his or her road in completing the 24 piece set.

Production of silver dollars in 1921 was split between two designs: the Morgan Dollar (which had been introduced in 1878) and the Peace Dollar. The former was struck at the Philadelphia, Denver and San Francisco mint, but the new Peace Dollar design would only be struck at the Philadelphia Mint, with 1,006,473 pieces struck for circulation and an extremely limited number of matte proofs. The 1921 Peace Dollar is the closest to the original design by Francisci, with a high relief that would be modified the next year, as it brought striking problems to the Mint. A very popular type coin, the 1921 Peace Dollar is not necessarily rare but it becomes scarce in the upper mint-state grades of MS-66 and MS-67. 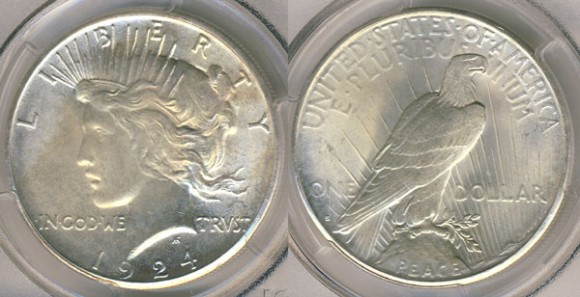 The 1924-S is often considered a common date, with a mintage of 1,728,000 pieces, in line with some of the other San Francisco dates of the series. What makes the 1924-S a different story than the others, however, is it’s rarity in uncirculated condition, especially at the gem level. Most were released into circulation and very few turned up later, unlike many dates which were included in treasury hoards of the 1960’s, where many different dates were found in uncirculated condition and released to the public at face value. While MS-63 pieces are relatively affordable (less than $500) gems are a completely different story, selling regularly for $7000 and up, making it one of the most expensive Peace Dollars in gem condition and virtually unknown in grades above that.

When you ask a numismatist to name the scarcest key-date of the series, the 1928 is bound to be the issue named. It has by far the lowest mintage of the series, with 360,649 pieces produced for circulation. Thankfully for modern day numismatists the low-mintage was realized early on and many numismatists of the 1920’s set a few pieces aside. The Great Depression that started in 1929 must have been the cause for many pieces to see a delayed release into circulation, and uncirculated pieces are scarce and often show many marks. Those that do survive in uncirculated condition do so in the lower ranges of mint state, with gems being very scarce and everything finer than that being rare, with about two dozen MS-66 pieces certified by the major grading surfaces and none finer. 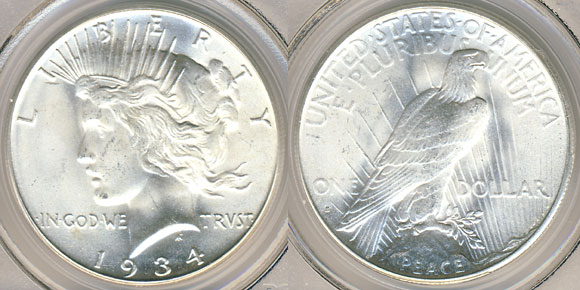 The 1934-S issue is often considered the second scarcest date in the Peace Dollar series, struck in the second to last year of the series. A total of 1,011,000 were struck for circulation. This is where the majority of pieces ended up, and while circulated pieces are not particularly rare they are not exactly common either. In uncirculated condition, regardless of what level, this is one of the rarest Peace Dollar series, with gems being rarer than the lower-mintage 1928 and priced almost equally to the 1924-S, despite that the latter has population figures about half of the former. Most of the other Peace Dollars struck in the 1930’s are available and this is by far the scarcest Peace Dollar of the decade, which was cut abruptly short after the Mints ceased production of Silver Dollars in 1935. 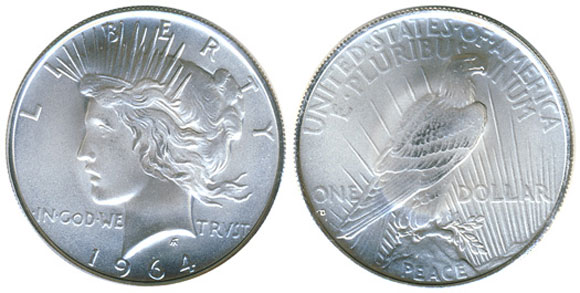 Normally we would have ended this article with the 1934-S but there is one more date that needs to mentioned, struck at the Denver Mint in 1965 (but dated 1964), thirty years after the design had last been struck. Reportedly 316,076 were struck for circulation, but when silver coinage ceased to be produced reportedly all were melted. Yet, there have been rumors of one or more pieces that may or may not have escaped the Mint sometime in 1965, but no one has ever been able to confirm such coin with pictures or the actual coin. The main reason for this, of course, is their legality. None were supposed to have left the Mint and if any did leave the Mint it must have been under very questionable circumstances. As this comes with the fact that the secret service is very likely to confiscate any 1964-D Peace Dollar that comes out of the woodwork none have ever been publicized, and if any does, be prepared for reports of lengthy court battles.

The majority of other Peace Dollar dates can be considered in common up to the MS-65 level, although some are scarcer than others. Any MS-66 or better Peace Dollar is a scarce coin, even for the most common dates, and MS-67 Peace Dollars are infrequently encountered.  Very, very few coins have been graded at the MS-68 level with only a few dates even known to exist at that grade-level. One coin that we have not yet mentioned is the 1927 Philadelphia issue, which has the second lowest mintage of the series at 848,000 pieces. Yet this coin is relatively inexpensive and not all that rare, as quite a few were saved after mintage, a story similar for many other dates of the series, becoming only rare in gem uncirculated condition.