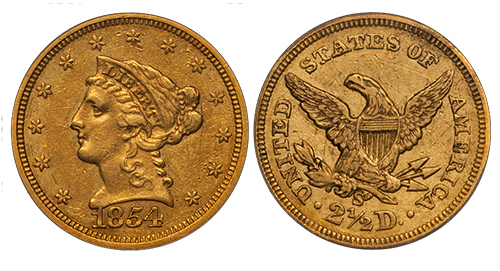 Struck throughout most of the 19th century and into the early 1900s, the Liberty Quarter Eagle constitutes a series of scarce coins with a fair share of rarities. A complete basic date and mintmark set comprises 136 or 137 different coins (depending on who you ask, more on that later), and that number does not include major varieties often included in such a series. As a result, very few people set the goal of completing this collection, and even fewer have come close to succeeding. That said, this denomination features plenty of coins worth discussing, and we will take a look at some of the major rarities that make this set such a difficult undertaking.

The 1841 Quarter Eagle has been nicknamed “Little Princess” and is one of the prime rarities in 18th century coinage, much discussed. Traditionally, it was listed as a Proof-only issue, with an estimated fifteen examples known to exist, but recent research has suggested that only four of these are true Proofs, while the others were produced as circulation strikes. In 2012, PCGS published a 37-page pamphlet with evidence to this effect, and there has been a shift toward acceptance of the eleven or so circulated pieces as true circulation strikes, made for unknown reasons (U.S. Mint records do not indicate that any 1841 Quarter Eagles were produced). Needless to say, because of its rarity few examples are ever offered for sale and discussion continues regarding the status of the “Little Princess”.

The 1848 CAL. Quarter Eagle is one of the most historical of all U.S. coins. While its mintage of 1,389 pieces is low, its true rarity is due to the fact that it was struck from the first shipment of gold received out of California, where James Marshall had discovered the commodity in the American River on January 24, 1848. To commemorate this fact, the letters “CAL.” were punched on the reverse, above the eagle. Often considered the first commemorative coin of the United States, examples are rare, in-demand, and infrequently encountered. Grades among known survivors are quite spread out, with the finest known example being a coin graded MS-68* by NGC. It last sold at public auction in January of 2008, realizing $345,000.

The 1854-S is the absolute key-date of the Liberty Quarter Eagle series, with one of the lowest mintages of all United States coins at a mere 246 pieces struck. The numismatic community did not know the issue existed until 1910, and to date only about a dozen individual examples have been identified, all in circulated condition. The reason for its rarity appears to be a simple lack of demand. With huge quantities of gold discovered in California the previous decade, most depositors of gold at the newly opened Federal Mint in San Francisco requested larger denominations. Therefore, somewhat larger quantities of eagles and half eagles were struck for circulation. The finest known is graded NGC AU-53, followed by three pieces graded at the XF levels, while the remaining pieces are certified at lower levels. One piece, graded XF-45 by PCGS, sold for $345,000 in February of 2007.

With a mintage of just 874 pieces, the 1856-D Quarter Eagle is one of a very limited number of United States coin issues that has a mintage of less than 1,000 coins. It also has the lowest mintage of any of the coins struck at the Dahlonega Mint. Despite the low mintage, a relatively high percentage of the original mintage still exists, with approximately 40-45 coins accounted for (the second rarest Dahlonega quarter eagle, the 1840-D, had a mintage of 3,532, with only a few more examples known to exist). Needless to say, this is still a very low number and pieces are always in demand.

The circulation strikes of the 1864 and 1865 Quarter Eagles, only produced at the Philadelphia Mint, are rarities with 2,824 and 1,520 pieces produced, respectively. The 1864 issue had an additional 50 Proofs struck; in 1865, the number was 25. While these pieces do not have the appeal many of the branch mint issues have, they are coins that deserve respect. In fact, the circulation strikes are so rare that Proofs, despite their extremely scant mintage, are more often encountered at public auction. Two Uncirculated 1864 Quarter Eagles are known, and only a single 1865 has been certified at the Uncirculated level. All the others show evidence of circulation, indicating that most were quietly released into circulation while collectors of the time settled for the Proofs available from the Philadelphia Mint. With the Civil War in its final stages attention was turned to other events, and for several years these two issues went largely unnoticed. They are now considered to be among most desirable of all coins produced during the Civil War. 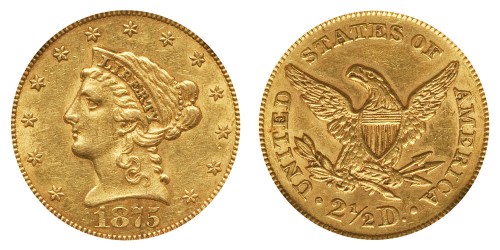 Like most of the other gold denominations struck in 1875, the Quarter Eagle had an extremely limited mintage, with production halted after 400 pieces–in addition to 20 or so Proofs–were struck for circulation. Of these, less than two dozen business strikes are known to exist, as well as perhaps a dozen or so Proofs. Demand was at an all-time low at this point, and the few business strikes were probably produced by the mint to prevent the Proofs from becoming ultra rarities. Still, any 1875 Quarter Eagle is a major rarity, with only a handful Uncirculated pieces known to exist. A PCGS MS-61 sold for just over $27,000 in August of 2010. Like other low-mintage Philadelphia issues, high-grade examples exhibit prooflike fields.

The two final rarities of this lengthy series were produced at the Philadelphia Mint in the 1880’s. The first was struck in 1881, when a mere 640 were produced for circulation; this was followed in 1885 by another production of only 800 coins. Both mintages were complimented by Proofs for collectors: 51 Proofs were minted in 1881 and 87 in 1885. The field of numismatics was a bit more developed by this period, and there are more survivors known in higher grades, although neither issue can be considered to be commonly available. Toward the end of the 19th century, quarter eagles ceased to circulate extensively, becoming something of an obsolete denomination, with many dates readily available in Uncirculated condition. This didn’t apply to the the 1881 and 1885 issues, however, since there weren’t many produced to begin with.

There are plenty of other dates that can be considered in such a lengthy series. Any of the Charlotte and Dahlonega issues are scarce, for instance. Many dates from the 1870s onward have extremely low mintages, with only a few thousand produced for circulation. As we have seen, quality is often lacking for the Southern branch mint issues, and on top of that they encountered heavy attrition during their time in circulation. Many issues are extremely rare to virtually unknown in Uncirculated condition, especially for some of the early dates.