The Liberty Head Nickel was introduced in 1883 and struck for thirty years primarily at the Philadelphia Mint. While the series is mostly known for the 1913 Liberty Nickel, an incredibly rare but unofficial issue of which a mere five pieces are known, there are also some other dates that are not all that easy to find. This is especially the case in uncirculated condition. This article will take a closer look at some of the scarcer dates of this popular series that is often recommended to beginning collectors. As we will discover, however, not all dates are all that easy to find, and a set in gem uncirculated condition might be a lot more difficult to put together than it might seem at first glance.

The 1885 Liberty Nickel has the lowest mintage of the Liberty Nickels struck in the 19th century and the second lowest of the series. While the mintage of 1,472,700 is not tremendously low when compared to some of the other 19th century key dates of other series, one has to remember that most of these were immediately released into circulation. Five cents still bought quite a lot in 1885 and few collectors were around to prevent pieces from circulating for years and years. As a result, heavily circulated pieces are found without too much difficulty but this issue becomes difficult in VF/XF and is actually rare in uncirculated condition, especially at the gem level. 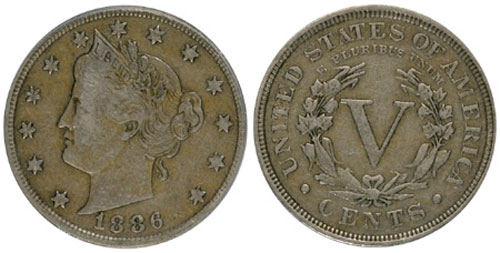 Nickel mintages remained low in 1886 although the level increased compared to the prior year to reach a total output of 3,326,000 pieces. As a result this issue is also quite difficult to find, although there are more circulated pieces that have survived because of the higher mintage. In uncirculated and especially gem condition, this issue is only slightly more common than the 1885, for the same reason outlined above; most pieces entered circulation and stayed there for quite some time, providing the necessary change in American commerce.

After a period of higher mintages nickel production dropped again in 1894 with a total output of 5,410,500 pieces for circulation. This is a relatively low-mintage which should have created a semi-key date in uncirculated condition. Unlike the 1885 and 1886 issues, however, the low mintage was noticed by collectors, and the 1894 is priced lower than many other Liberty Nickels in gem uncirculated condition. In any circulated grade, however, the date carries a healthy premium, especially in VF to XF grades. It appears that those pieces that were not saved by collectors in uncirculated condition entered circulation and stayed there for quite some time, with relatively few pieces circulating briefly.

In 1912 change was about to come with a new design for the nickel denomination introduced the next year, the Buffalo Nickel. Another change, however, was already implemented in 1912, and this was the introduction of branch-mint nickel production at both the Denver and San Francisco Mint. Both issues are relatively scarce, with the 1912-D having a mintage of 8,474,000 pieces. Most of these entered circulation and this issue is scarce in all but well-circulated grades, and actually sells for a healthy premium in uncirculated condition. While there might have been some coin collectors in Denver in 1912 very few collectors at the time collected by date and mintmark, resulting in relatively few pieces saved from entering circulation.

Without a doubt the 1912-S is the most difficult of the 20th century issues to find in any grade with the lowest mintage of the series at 238,000 pieces. The reason for the low mintage was the extremely late start of production; the first nickels were not struck at the San Francisco Mint until December 24, 1912, and the entire mintage was struck during the subsequent week. Luckily enough for present-day collectors a new design (the Buffalo Nickel) was introduced only a few months later which caused some pieces to be saved from staying in circulation for too long. Yet this is a well-known 20th century key-date that is amongst the more difficult Liberty Nickels to locate in any grade.

A discussion of key-date Liberty Nickels would usually end with these few dates, with most of the other dates to be considered “common” in all grades. There are, however, a few things that need to be taken account when it comes to Liberty Nickels. First of all, at the turn of the century very few people were collecting uncirculated specimens of circulating coinage, with most collectors choosing to buy Proofs directly from the Mint. As a result the number of pieces that have survived in gem uncirculated condition is relatively low. Secondly, quality is a problem at all grade levels but in particular in uncirculated condition. Nickel is a very hard material and the Mint has always had trouble striking up nickels to their fullest detail. As a result the majority of Liberty Nickels fail to show full detail, in particular in the center of the obverse and the centers of the stars, where weakness is easily noticed.

Compared to silver, nickel does not tone as easily, which has also resulted in a relatively small number of Liberty Nickels that are toned in the same manner as many silver coins such as Morgan Dollars. Except for Proofs (which were often stored in special envelopes) most uncirculated Liberty nickels fail to display many colors besides gray and sometimes blue tones. A fully toned set of Liberty Nickels, simply said, would become an endeavor that can easily take a lifetime to complete.