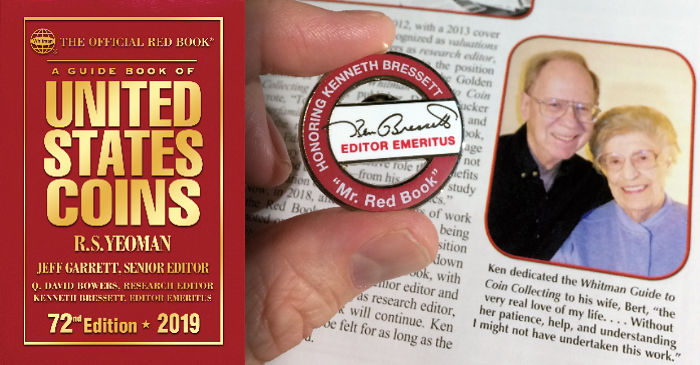 (Pelham, AL) — Kenneth Bressett, longtime editor of the Guide Book of United States Coins (popularly known as the “Red Book”), has retired into Whitman Publishing’s newly created position of Editor Emeritus. The 2019 (72nd) edition of the Red Book, available now from booksellers and hobby shops nationwide, features a 10-page illustrated tribute to Bressett. In addition, the hardcover format includes a commemorative gold-foil portrait and a facsimile of his famous signature on the back cover. Bressett will make appearances at several shows and events throughout the year to autograph books.

The Guide Book of United States Coins debuted in November 1946 (with a cover date of 1947) as the hobby’s only fully illustrated catalog with objective retail pricing for every U.S. coin. Prior to this, the Handbook of United States Coins (the “Blue Book,” first published in 1942) gave unbiased wholesale pricing—how much dealers were paying, on average, for U.S. coins. These two resources were both created by R.S. Yeoman and published by Whitman. Before them, collectors had to rely on lists written by individual coin dealers, which were seen as biased and did not have wide distribution. The first edition of the Red Book was so popular that it sold out 9,000 copies in a matter of weeks, requiring another print run in February 1947. 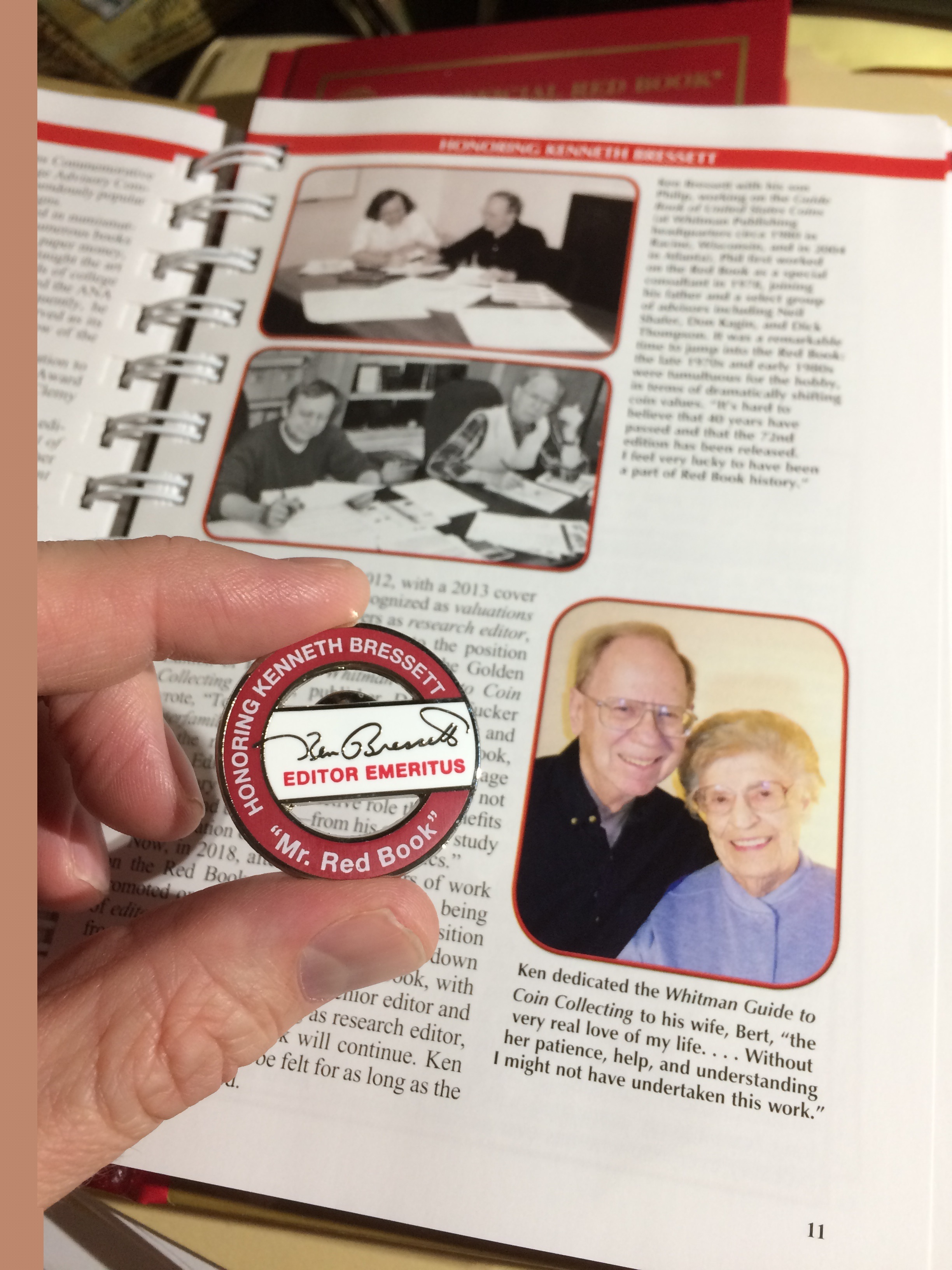 Kenneth Bressett, a young collector from Keene, New Hampshire, first met R.S. Yeoman at a coin convention in the mid-1950s. He mentioned several errors he’d found in the latest edition of the book. In 1956 Yeoman invited Bressett to be a freelance editor, and in 1959 Bressett moved with his family to Racine, Wisconsin, to officially join the Whitman Publishing staff full time. He worked closely with Yeoman—by that time one of the most famous numismatists in the world—developing the Red Book and Blue Book and many other hobby references and products. By the time Yeoman retired in 1970, Bressett had taken over many duties as “coordinating editor” of the Red Book. In the 27th edition he was credited as the book’s editor, and in the 66th edition, he was elevated to Senior Editor, with Q. David Bowers and Jeff Garrett assisting as Research Editor and Valuations Editor, respectively.

Now, in 2018, after nearly 65 years of work on the Red Book, Ken Bressett is being promoted again, this time to the position of Editor Emeritus. Garrett is taking the reins as Senior Editor and Bowers is continuing as Research Editor. “Although Ken will step down from day-to-day management of the Red Book, we know his work in numismatics will continue,” said Whitman publisher Dennis Tucker. “And of course his influence, like that of R.S. Yeoman, will be felt for as long as the book is enjoyed by hobbyists around the world.”

Tucker encourages collectors to buy two copies of the hardcover this year—one for day-to-day use, and one to have Bressett autograph as a numismatic keepsake. “Mr. Red Book” will be at the American Numismatic Association Summer Seminar in Colorado Springs, June 16–28, and the ANA World’s Fair of Money in Philadelphia, August 14–18. He is scheduled to appear for a week of celebrations at the Whitman Coin and Collectibles 2018 Winter Expo, October 25–28.

“The story of the Guide Book of United States Coins is not merely a story about those who produced it,” Bressett has said. “It is a tribute to the thousands of individual contributors who have honed its contents to the point that it has become a numismatic standard and a valuable collectible in its own right. It is a success story that remains unparalleled by any other numismatic book.”


About the Guide Book of United States Coins

The 72nd edition of the Red Book is available online and at bookstores and hobby shops nationwide. In addition to offering a Large Print Edition and several formats of the regular edition (hardcover; spiralbound softcover; and spiralbound hardcover), Whitman Publishing is also taking pre-orders for the leather-bound Limited Edition (250 copies autographed by Bressett). For more information and to order, visit the website of Whitman Publishing.

Whitman Publishing is the Official Supplier of the American Numismatic Association. As a benefit of membership in the ANA, members can borrow the Red Book (and other Whitman books) for free from the Association’s Dwight N. Manley Numismatic Library, and also receive 10% off all Whitman purchases. Details are at the website of the ANA. 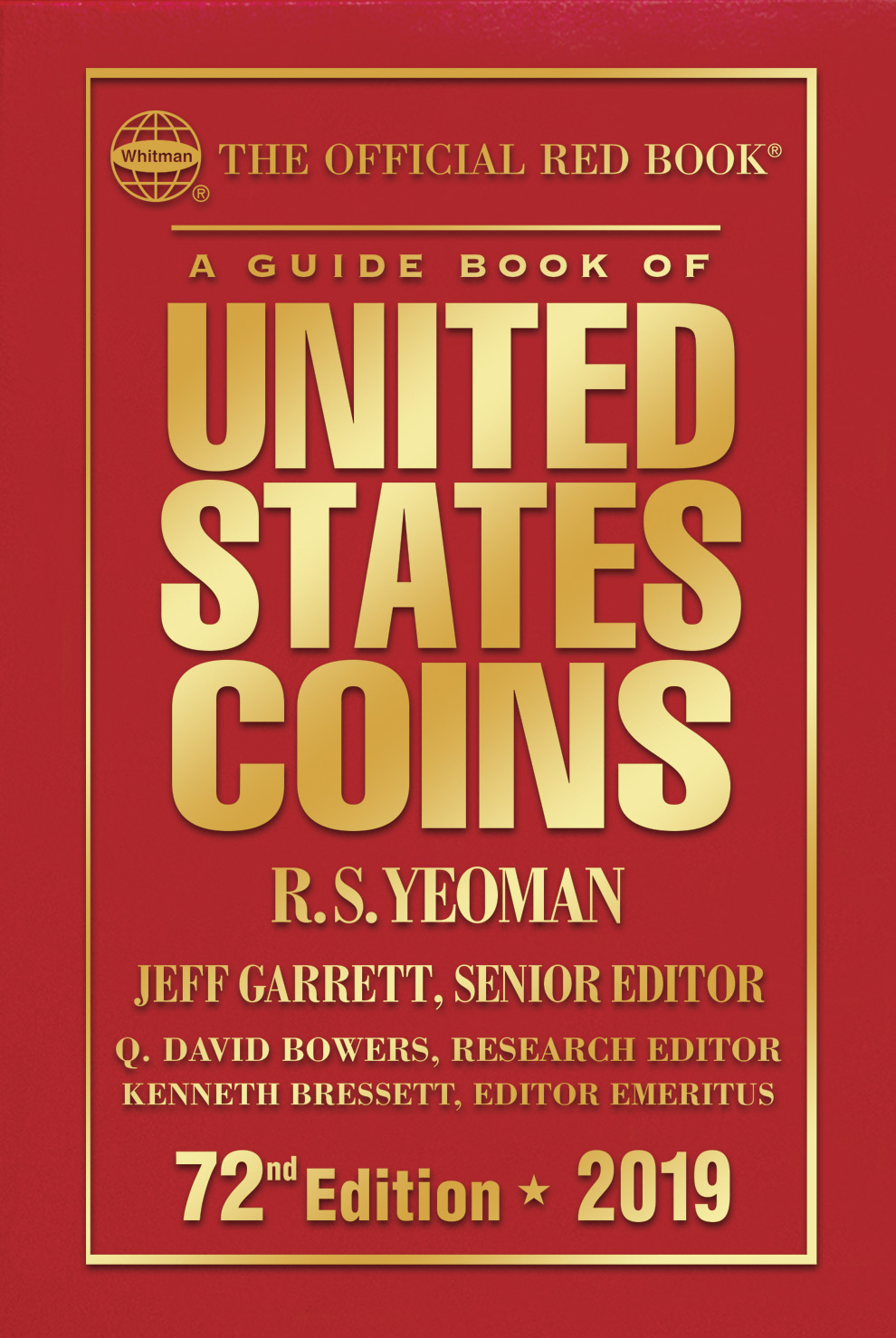