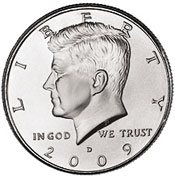 Late last week, the United States Mint sold out of another 2009 dated product. As the end of the year draws closer and remaining inventories dwindle, sell outs may become more frequent. The 2009 Kennedy Half Dollar Two Roll Set sold out on December 24, 2009.

This product originally went on sale January 22, 2009. Each set contains one 20-coin roll of 2009 Kennedy Half Dollars produced at the Philadelphia Mint and one 20-coin roll produced at the Denver Mint. These coins come packaged in US Mint branded wrappers that indicate coin series, face value, and mint of origin. The sets were priced at $32.95 each.

Since 2002, the United States Mint has not produced the fifty cent denomination for circulation. They have only continued to produce the coins for sale to collectors in numismatic bags and rolls or for inclusion within annual coin sets offered to collectors. During the period from 2002 to present, mintages for issues of the Kennedy Half Dollar series have ranged from a high of 3.8 million, for the 2005-P Kennedy Half, to a low of 1.7 million, for both the 2009-P and 2009-D Kennedy Half.

This year, the United States Mint also offered a 2009 Kennedy Half Dollar 200-coin bag, which remains available for sale. This bag contains 100 coins produced at the Philadelphia Mint and 100 coins produced at the Denver Mint. Collectible uncirculated versions of the Kennedy Half can be found in the 2009 Mint Set and collectible proof versions can be found in the 2009 Proof Set and 2009 Silver Proof Set.