The United States Mint has started accepting orders for bags and rolls of circulating quality 2014 Kennedy Half Dollars. These coins were minted at the Philadelphia and Denver Mint facilities and have never been placed into circulation. 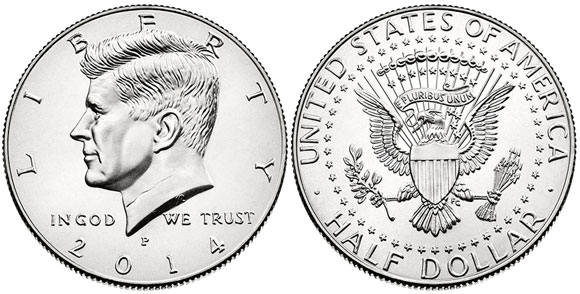 The Kennedy Half Dollar features a profile portrait of President John F. Kennedy created by Gilroy Roberts. The inscriptions include “LIBERTY” and “IN GOD WE TRUST” with the date positioned at the base and the mint mark above.

The reverse design by Frank Gasparro is based on the Presidential Seal, which consists of a heraldic eagle with a shield at its chest and an olive branch and bundle of arrows in its talons. The eagle’s beak holds a scroll reading “E PLURIBUS UNUM” and a circle of 50 stars surrounds the image. Additional inscriptions include “UNITED STATES OF AMERICA” and the denomination “HALF DOLLAR”.

Since 2002, the half dollar denomination has not been struck for general circulation, but only produced for distribution within numismatic products. The United States Mint is offering circulating quality 2014 Kennedy Half Dollars as a two roll set or within a 200-coin bag.

The two roll set includes one 20-coin roll each from the Philadelphia and Denver Mints. The rolls are packaged in wrappers which include the date, mint mark, and face value of the coins. Each two roll set is priced at $32.95.

The 200-coin bag includes 100 coins from each mint facility. The coins are placed into a mint sewn bag with a tag indicating the date, mint marks, and face value. Each bag is priced at $139.95.

The US Mint indicates that these bags and rolls will remain on sale for one year from the original on-sale date of February 13, 2014, or until inventory is depleted prior to the one year time frame. Additional special numismatic products are expected to be released later in the year to mark the 50th anniversary of the series.