With the United States Mint due to release special versions of the Kennedy Half Dollar to celebrate the 50th anniversary of the series, let’s take a look back at the 1998 Kennedy Collector’s Set. This product brought together coins featuring brothers Robert and John F. Kennedy and provided collectors with the opportunity to acquire the first Kennedy Half Dollar struck with a matte finish. 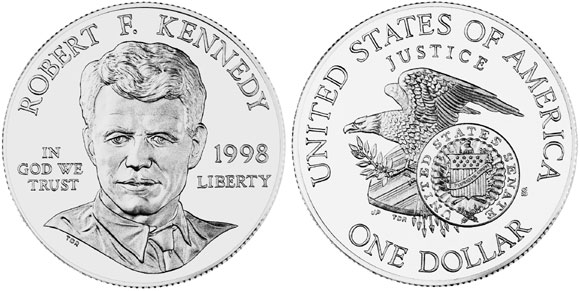 The silver dollar featured an obverse portrait by Thomas D. Rogers, which was designed in the presence of Mrs. Robert Kennedy who provided instruction on details concerning her late husband’s features. The reverse design by Jim Peed contained a depiction of the Seal of the Department of Justice where Kennedy had served as the Attorney General and the Seal of the United States Senate where Kennedy had served at the time of his tragic death. 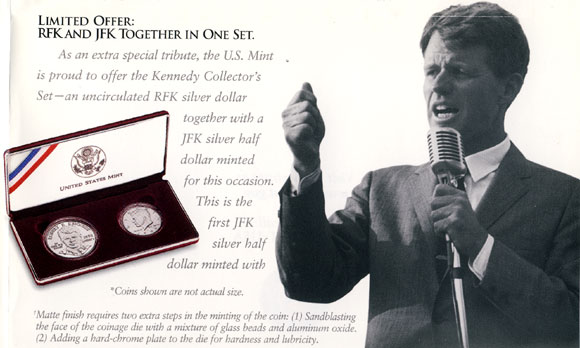 In order to support sales for the program, the United States Mint offered the Kennedy Collector’s Set, which contained the uncirculated commemorative silver dollar along with a Kennedy Half Dollar with a matte finish. This special finish was created by sandblasting the face of the coinage dies to achieve a similar in appearance to the uncirculated silver dollar. The half dollar was struck in a composition of 90% silver at the San Francisco Mint and carried the “S” mint mark.

The offering was similar to two previously issued sets which had brought together a commemorative silver dollar with a matte finish version of a circulating coin. Matte finish Jefferson Nickels had been included in the 1994 Thomas Jefferson Coinage and Currency Set and the 1997 Botanic Garden Coinage & Currency Set. The first set had been available throughout the commemorative program issuance period and reached sales of 167,703. The second set was limited to an issuance of only 25,000 sets and reached a sell out within the first week. 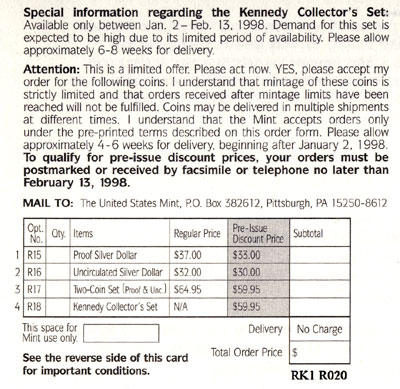 The 1998 Kennedy Collector’s Set took the approach of utilizing a limited six-week ordering window. The sets were available to order only between January 2 and February 13, 1998 with customer orders determining the total number of sets sold. The ordering window strategy was credited with creating a sense of urgency among collectors and benefiting production since the number of coins necessary to produce would be known. Each set was priced at $59.95. Since the uncirculated silver dollar included in the set was offered individually at $30 per coin, this equated to an extra cost of $29.95 for the matte finish half dollar. 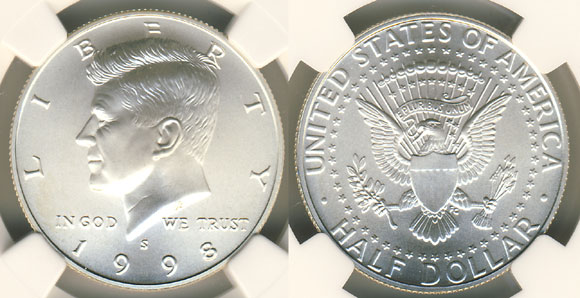 During the limited ordering period, sales reached approximately 62,000 sets. This amount also represents the total mintage for the 1998-S Matte Proof Kennedy Half Dollar, making it the current key date for the series.

Collectors who purchased the 1998 Kennedy Collector’s Set have been rewarded with higher secondary market prices.  Sets in the original packaging containing both coins continue to sell for more than triple the original issue price. Many examples of the matte proof half dollar have been separated from the original sets and now reside in third party grading holders. Pieces which have received the top grade of SP 70 from PCGS or NGC have commanded strong premiums.