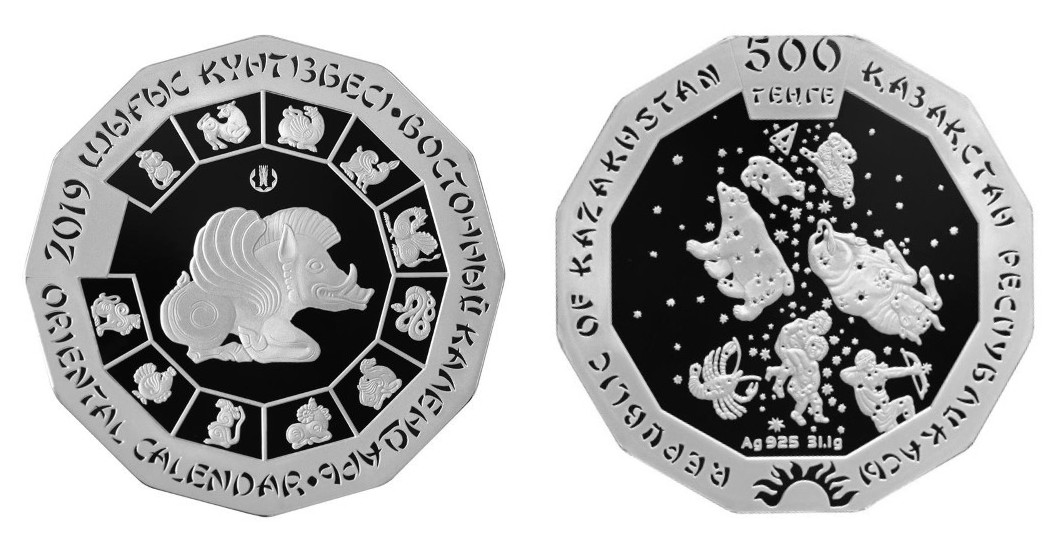 The National Bank of Kazakhstan has issued (19th November) their ninth set of Lunar New Year collector coins that are also part of the ongoing design concept, initially launched in 2011. The design concept continues with highlighting each zodiac figure on the 12-sided coin.

Inspired by one of the country’s most well-known landmarks, the elaborate Oriental Calendar Fountain adjacent to the Academy of Sciences in Almaty features fabulous carved sculptures of the 12 animals in the Kazakh calendar, which is cyclical every 12 years and is similar to the Chinese version — but with a snail instead of a dragon. The fountain was created in 1980 by the Architect Vladimir Katsev with mosaic murals designed by Vladimir Sergeyevich Tverdokhlebov. Aleksandr Borisovich Tatarinov created the statues. 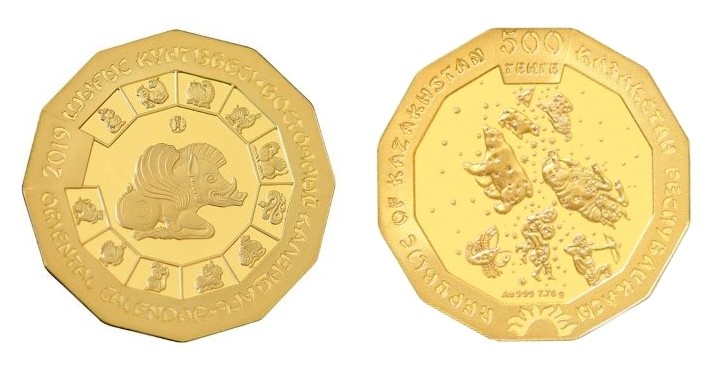 The 2019-dated 12-sided coins are produced by the Mint of Kazakhstan at their facilities in East Kazakhstan Oblast, north of Almaty, on behalf of the National Bank of Kazakhstan. The obverse side includes, in the centre, a stylised figure of a pig in recognition of the lunar Year of the Pig, and is surrounded by the other 11 insignias representing the Chinese zodiac calendar. The mintmark of the Kazakhstan Mint is placed above the pig. The year of issue, 2019, and the inscriptions ШЫҒЫС КҮНТІЗБЕСІ in Kazakh, ВОСТОЧНЫЙ КАЛЕНДАРЬ in Russian, and ORIENTAL CALENDAR in English, are included on the surface of the coin in incused oriental stylised letters that encircle the primary design. The reverse side includes the constellations of the celestial map, along with several of the representations of the stars familiar to astronomy. An inscription, Ag 925 31,1g. and 500 ТЕҢГЕ, indicate both the denomination of the coin and fineness of the silver version. The gold coin includes the text AU 999 7.78g. The inscriptions ҚАЗАҚСТАН РЕСПУБЛИКАСЫ in Kazakh and REPUBLIC OF KAZAKHSTAN in English encircle the main design with incused, stylised letters along with a representation of the Sun.

The coins are available from the National Bank of Kazakhstan for residents and international collectors through Coins Corner: Kazakhstan & World Modern Coins, which retails a wide range of Kazakh coins and banknotes through their website.