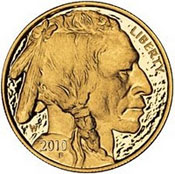 The following events related to coins and coin collecting will take place during the month of June 2010. Highlights include Long Beach Expo and Baltimore Expo, as well as the release of several new gold coins from the United States Mint.

To start the month, the United States Mint will release the second quarter in the new America the Beautiful Quarters Program. This coin features Yellowstone National Park and depicts the famous Old Faithful geyser and grazing buffalo.

A few days later on June 3, the US Mint will release the 2010 Proof Gold Buffalo and 2010 Jane Pierce First Spouse Gold Coins. Besides these two numismatic gold offerings, they will also begin sales of their line of fractional gold bullion coins on June 10.

The Long Beach Coin & Collectibles Expo will be held from June 3 to 5 followed by the Whitman Baltimore Expo from June 17 to 20. Coin grading services PCGS and NGC will be at both locations accept on site submissions.