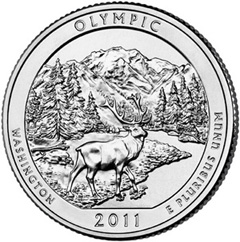 This month’s coin collecting calendar includes fewer numismatic product releases from the United States Mint, but two major shows. The eighth coin in the America the Beautiful Quarters series will be released into circulation.

The US Mint will release the numismatic version of the Yosemite National Park Five Ounce Silver Coin on June 9, 2011. This follows the quick sell outs for the prior two releases. Once again, the coins will be limited to one per household and priced at $279.95.

Later in the month, the Julia Grant First Spouse Gold Coin will go on sale. The maximum mintage is expected to be 15,000 across proof and uncirculated versions and pricing will be established based on the average price of gold in the week leading up the release.

On June 13, the Olympic National Park Quarter will be released into circulation. This design features a Roosevelt elk stepping onto a gravel river bar of the Hoh River with Mount Olympus in the background. A launch ceremony will be held on the following day.