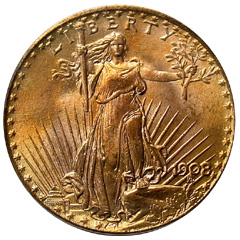 Three times a year, in the spring, summer, and fall, Whitman Publishing sponsors the Baltimore Expo, a large coin show held in Baltimore, Maryland. The shows attracts both local dealers and collectors and those from as far away as the west coast. Traditionally, the June show is the slowest of the three, and this year’s followed the usual pattern, although several dealers said they did good business.

Overall, dealers, large and small, said they were definitely doing less business than they did during the April show, but sales were still quite strong. Various explanations were offered. One is that summer is usually a slower period in the numismatic world, as collectors and part-time dealers tend to focus on vacations and other non-coin pursuits. In fact, sales were so slow for some dealers that they apparently had time for a leisurely lunch. While eating near one group of sellers, I cringed as I heard them exchange off-color jokes about various ethnic groups, including my own.

In addition, precious metals, especially silver, have been weaker in recent months. For reasons I have never quite understood, increasing metals prices always result in more buyers than sellers. That is odd since one should try to buy low and sell high. But when metals are going up, people seem to worry they will miss the boat if they do not go and stock up on bullion products. At the April Baltimore Expo lots of metals dealers said they were doing more selling than buying. At the time gold and silver were setting new highs.

And so this pattern also held last week in Baltimore with many dealers saying that with lower metal prices, sales were running slower at the show as well as at their stores.

Another factor that contributed to a slower show is the fact that Whitman was unable to secure the exhibit halls it normally uses for the expo, and participants had a somewhat harder time getting to the exhibit area than usual. Whitman representatives have indicated that the next show will be at the usual location in the Baltimore convention center.

Whitman debuted a new tool, the Whitman Compass, at the show. It allows dealers to enter their stock into a database which show attendees can access from dedicated computer terminals. From what I was able to determine, it was not used by a large number of people, though that perception could be wrong. I asked a couple dealers if they had customers who came to check out items they found with the Whitman Compass, and none of them said they did, but that does not mean it was not used. I think a lot of people did not know about it, and from what I saw the terminals were in a location that was not close to the exhibit area used this time.

As a collector and coin writer, I did not mind the slower show. It meant the aisles were not as hard to navigate, and dealers had more time to negotiate as well as to talk coins.

I discussed the market for slabbed, common-date pre-1933 gold coins with David Selvette of Breck Rare Coins in Texas. He reinforced a view I have heard from other dealers, which is that the current market is very weak for these coins even though premiums are at a nine-year low. I suppose it is another case of people not taking advantage of the opportunities that are presented by market cycles. Mr. Selvette also mentioned that in his view one of the reasons this segment of the market is depressed is that Heritage Auctions, a major market leader, has been selling these coins at a discount. But with these coins it is essential to buy the best quality possible, as most discounted coins are of inferior quality.

I found it interesting that few dealers seemed to have any America the Beautiful five ounce coins – either the numismatic or collector versions – out for display unless they were already sold when I came by. One dealer, Gainesville Coins, which specializes in bullion, did have a tube of the 2011 Gettysburg coins and one of the Glacier Park coins. It also had a set of PCGS BU 2010 coins, for which it was asking $1450. When I asked how much they pay for such a set, or for similar 2010 sets, I was told that they are not buying any 2010 coins at the moment.

Different dealers have different clienteles and specialize in different areas, so I would not necessarily take that as an indication that there is no wholesale market for the 2010 coins. They seem to be selling well on e-Bay and elsewhere. But those looking to sell may wish to wait for higher prices after silver resumes its rise, and the coins again become harder to obtain, as I expect will happen eventually. It is worth remembering that one rarely makes money in coins quickly unless one finds an underpriced coin, or flips for a quick profit on e-Bay.

John Robinson of Edgewood Coin store in Florida told me that he has some customers who collect the ATB coins, especially the bullion versions as an alternative to silver eagles.

I also discussed third party grading and counterfeits with Mr. Robinson. He noted that he has never come across a counterfeit NGC or ICG holder, only ones from PCGS which were not genuine. He thinks the slab counterfeiters target PCGS because it is the industry leader in third party grading. We also discussed the differences between the various grading companies. He said that his company does a lot of business with ICG, and that is because he feels it does a good job of grading accurately at less cost than PCGS and NGC.

All things considered, it was another day well spent in one of my favorite American cities.