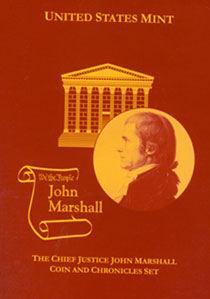 During the course of the modern commemorative coin era, the United States Mint has offered certain coins within specially presented sets including information or materials related to the object or person being commemorated. One recurring product type known as the Coin & Chronicles Set made its debut with the 2005 John Marshall Silver Dollar.

The commemorative program had been authorized under Public Law 108-290, which required the issuance of up to 400,000 silver dollars in commemoration of the 250th anniversary of the birth of Chief Justice John Marshall. He had served as Chief Justice of the Untied States Supreme Court from 1801 to 1835 and established the principle of Judicial Review, which asserted that the Supreme Court had the authority to overturn an Act of Congress if it exceeded the powers granted in the Constitution. 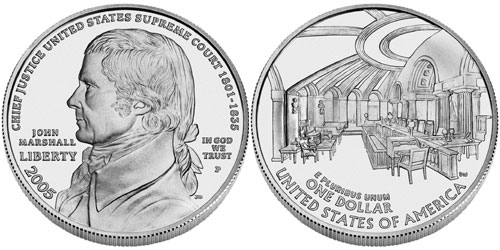 The 2005 John Marshall Silver Dollar carried a portrait of the Chief Justice on the obverse, designed by John Mercanti based on an 1808 painting by Charles-Balthazar-Julien Fevret de Saint-Memin. The reverse depicted the old Supreme Court Chamber within the Capitol, as designed by Donna Weaver. This represented the first time that a Supreme Court Justice was honored on a U.S. coin.

The individual proof and uncirculated versions of the coin were launched on May 4, 2005. The John Marshall Coin & Chronicles Set was released several months later on July 18, 2005. The product was limited to 25,000 units and included the uncirculated version of the silver dollar, along with an intaglio print executed by the Bureau of Engraving and Printing, and an informative booklet created by the Supreme Court Historical Society.

The special sets were priced at $59.95 each and initially limited to ten sets per household. The household limit was later lifted and sales continued until just before the end of the calendar year. Ultimately, the John Marshall Coin & Chronicles Set sold 18,134 units.

Later Coin & Chronicles Sets issued by the United States Mint included sets for Benjamin Franklin in 2006 and Abraham Lincoln in 2009. Each of these sets managed to sell out of their entire product limit of 50,000 sets each.