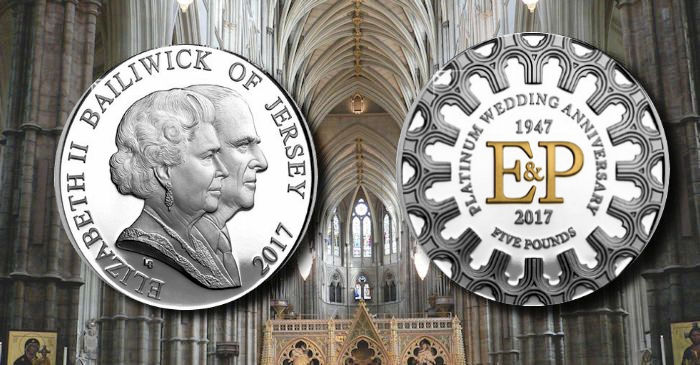 The treasury of the Bailiwick of Jersey, Channel Islands, have issued a new range of crown coins which celebrate an amazing milestone in the life of the United Kingdom’s Queen Elizabeth II, who, along with her husband, the Duke of Edinburgh, will celebrate an unprecedented 70th (or platinum) wedding anniversary. The Queen and the duke, as sovereign and consort in the United Kingdom, are the first royal couple to ever reach this momentous anniversary. Queen Elizabeth II and Prince Philip are also the longest living in their capacities, and from February of this year, the Queen herself was the first English or British monarch to observe her 65th year of reign (or Sapphire Jubilee).

The royal couple announced their engagement in July 1947, just months after then-Princess Elizabeth celebrated her 21st birthday. Her engagement to then-Prince Philip of Greece and Denmark announced they would marry in the autumn the same year. Afterwards, Prince Philip was made Duke of Edinburgh and granted the style of His Royal Highness. Princess Elizabeth, the Duchess of Edinburgh, became Queen of the United Kingdom of Great Britain and Northern Ireland (as well as head of state for a number of other realms) on the 6th February 1952, upon the death of her father, HM King George VI. She was a young mother of two children and also a wife at the time of her accession — and the lives of this small family were changed forever more. Over the last 70 years, her husband, the Duke of Edinburgh, has been a constant presence and support by her side publicly and privately, so much so that during their golden wedding celebrations in 1997, the Queen paid a loving public tribute to her Prince by saying:

He is someone who doesn’t take easily to compliments but he has, quite simply, been my strength and stay all these years.

The reverse is designed by former Royal Mint engraver and current coin and graphic designer Michael Guilfoyle. It features the couple’s initials of E & P with a border inspired by the North Rose Window of Westminster Abbey, where their wedding took place on the 20th November 1947.

The coins are minted in three varieties: two versions in cupro-nickel (Brilliant Uncirculated and Proof) and one in .925 sterling silver (Proof).

The cupro-nickel Proof version also includes a gold application on the reverse which highlights the initials of E & P.

The silver Proof examples are presented in a custom case with numbered certificate of authenticity. For additional information on this and other coins issued by the treasury of the Bailiwick of Jersey, please visit the website of Westminster Collections.

One popular design motif for the U.K.’s new £1 coin: Breakfast