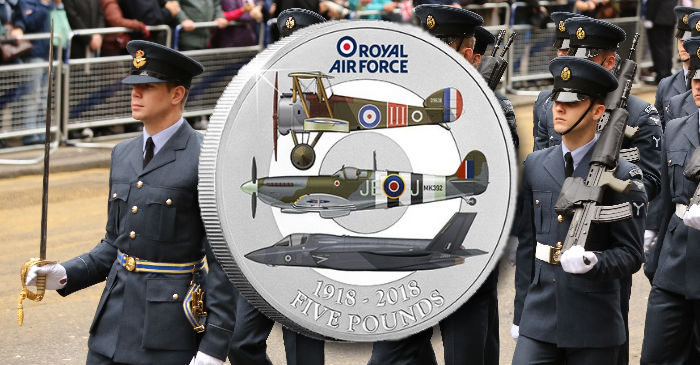 The government and treasury of Jersey, Channel Islands have issued new collector coins which are in celebration of the world’s first established fighting forces to take to the air and also develop the advances of flight technology. The Royal Air Force came into its own during the fighting in Europe in what was once referred to as the Great War, later known as World War I. The other countries to make great advances at this time were France and Germany. Germany’s “Red Barron,” Manfred von Richthofen (1892–1918), was known for his prowess and the 80 combat victories he flew against the allies. Britain’s own James McCudden (1895–1918), who, before his death in the service of his country, would score 57 combat victories as part of the Royal Flying Corps — the predecessor to the Royal Air Force. James McCudden remains among the most highly decorated airmen in British military history.

Officially licensed by the Ministry of Defense (MOD), the coin’s reverse design features the RAF logo above three iconic aircraft which show the technological advancement of the RAF over the last 100 years. It is a great tribute to the extraordinary history and evolution of the aircraft of the Royal Air Force, much of it experienced during the 20th century. Featured aircraft on the reverse side are the Sopwith Camel, the Supermarine Spitfire, and the Lockheed Martin Lightning II. The Sopwith Camel was a single-seat biplane fighter aircraft introduced on the Western Front in 1917 and was developed by the Sopwith Aviation Company, becoming one of the most iconic fighter aircraft of the First World War. The Supermarine Spitfire was also a single-seat fighter aircraft used by the Royal Air Force and other Allied countries before, during, and after World War II. Many variants of the Spitfire were built using several wing configurations and was produced in greater numbers than any other British aircraft. The Lockheed Martin F-35 Lightning II is a fifth generation single-seat, single-engine, all-weather stealth multirole combat fighters which was designed to perform both ground attack and air superiority missions.

The obverse of the coin includes the effigy of HM Queen Elizabeth II, as created by Ian Rank-Broadley, along with the issuing authority and year 2018 — all within the legend encircling the Queen’s effigy.

The reverse design of the cupro-nickel Brilliant Uncirculated variety is applied in true colour.

The cupro-nickel Proof version is highlighted in 24-carat gold ink and the sterling silver strikes also include a true colour application of the featured aircraft.

Both Proof coin options are encapsulated and presented in custom cases with certificates of authenticity. For British addresses, the coin is available from the Westminster Collections at face value.

For additional information on these and other coins issued by the treasury of Jersey, please visit the website of the Westminster Collections.