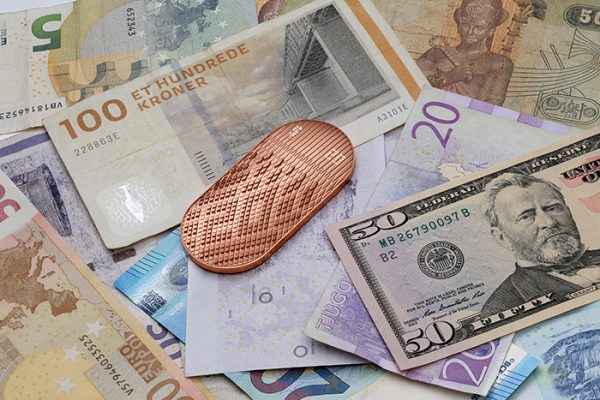 In the early 1600s, Japanese shogun Tokugawa Ieyasu sought a monetary system that would reduce Japan’s dependence on Chinese coins. The resulting “Tokugawa coinage” was struck in silver, bronze, and gold; the largest denomination (predating Tokugawa’s system by more than a decade) was the large oval Ōban, followed by the gold oval Koban and several smaller denominations in silver, gold, and bronze. The system would last until the Meiji Restoration in 1868. Depending on the size (which varied widely over time) and the date, Koban in Extremely Fine condition can fetch $35,000 or more from modern collectors.

Today, in a turn of events worthy of science fiction (or at least a sci-fi/fantasy series on Netflix), the design of the four-century-old coin has been borrowed for a digital-payment concept called Scrip. 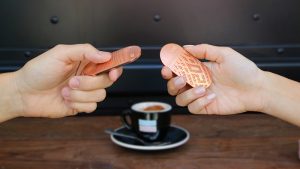 Devised by the firm NewDealDesign (the company that brought us the Fitbit, among other things), Scrip is an elegant, handheld device that aims to restore the tactile experience to spending money. NDD describes it as “a universal cash device, like an ATM in your pocket, that’s pre-loaded from your smartphone. . . When paying for something, your thumb moves  over the device away from your body, the way it could when you’re counting out old-fashioned bills.”

At 1.5 x 3.5 inches, and constructed of gleaming copper, the Scrip device has a distinct resemblance to the gold Koban. But it was the Tokugawa coin’s ridged surface that inspired Scrip’s most tactile feature: a pattern of dots that ripples to the surface when a payment is being made. Swiping presses the dots back down; the bigger the payment, the more swipes are required. The tactile feedback adds psychological heft to what is generally a sensationless transaction.

The designers are aware that Scrip may never make the leap from concept to consumer product. Nonetheless, it will have made a contribution to the development of tactile interfaces and wearable technology.