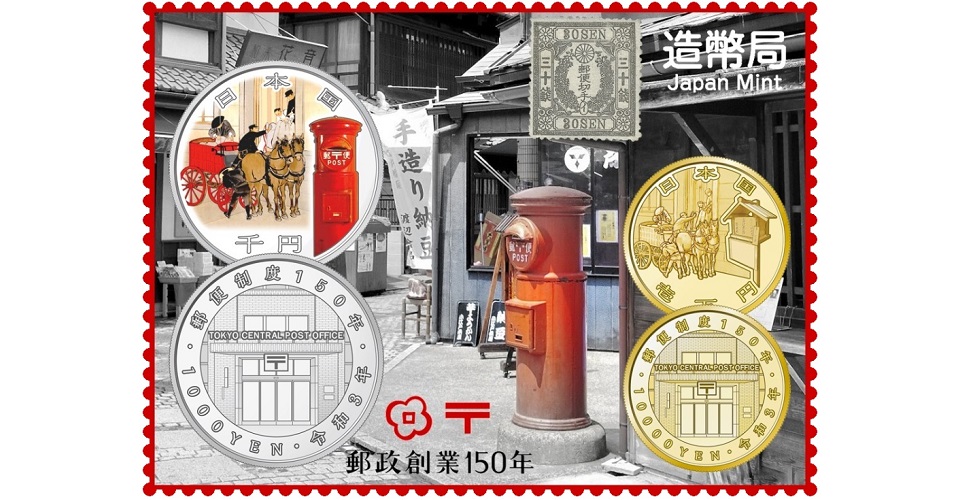 The Japanese Ministry of Finance has authorised the release of collector gold and silver coins to mark the 150th anniversary of the founding of Japan’s Postal system which was first organised in 1871. It was Maejima Hisoka (1835–1919) who built the Japanese postal system 150 years ago, with the creed of “don’t hesitate to be an unsung hero — always have a desire to do good for others.” For his efforts, Hisoka is fondly remembered today as Yūbin Seido no Chichi, or simply “Father of the Postal System.”

With the emergence of the Meiji-era in Japan from 1867, which involved rapid modernisation and adoption of many western practices in terms of business and commerce, the need for a comprehensive postal system to both cater to the needs of the Japanese public as well as contact with the outside world was crucial. In terms of communication and before the formation of the postal system, Japan was rudimentarily connected via five main highways known as “Go-kaido,” extending from the then-capital Edo, where the Shogunate government was established.

By April 1871, and under the organisational skills of Hisoka, a central mail and traffic office was established as the country’s first modern postal service. Initially powered by horse-drawn carriages and rickshaws, later with bicycles, a system of delivered correspondences to home and business addresses was firmly in place. The next improvement to increase convenience for the public was the need for pre-paid postage in the form of stamps rather than the impractical practice of physically attaching coins to envelopes. Ultimately a flat rate of postage was introduced with the issuance of postage stamps, which also increased the use of the system by the public. Four years after the founding of the postal service, government mail handling offices were renamed post offices who soon became centres of their own commerce in rural villages and towns. The post office was also able to facilitate the ease of movement of money in the form of postal money orders and also that of receiving and sending funds internationally. Soon after, the post office offered a savings programme. So successful was this service that by the mid-1960s, the post office held approximately three trillion yen’s worth of deposits, or about 15% of all Japanese household savings. In 1877, Japan Post was invited to join the Universal Postal Union and 10 years later, the distinctive 〒 mark was officially adopted as the logo for the Ministry of Communications, of which the governance of Japan Post became part. By the time Hisoka left his cabinet position as Vice Minister for Home Affairs in 1881, the Japanese postal system had expanded to 5,099 post offices and was continuing to grow. In 1888, Hisoka was appointed as Vice Minister of Communications until 1891, during which time he established Japan’s state-owned telephone service.

At the turn of the last century, red “pillar” boxes were introduced onto Japanese streets, manufactured in Great Britain, these cylindered red receptacles became a familiar sight across the country and many are still in use today. In 2007, Japan Post was privatised in accordance with new policies pertaining to state-owned public services. The Japanese Ministry of Finance retained 100% of shareholder investments, and, as of 2020, the government still holds 57% of shares.

The gold and silver Proof quality commemorative coins are produced by the Mint of Japan at their facilities in Osaka and on behalf of the Bank of Japan and Ministry of Finance. 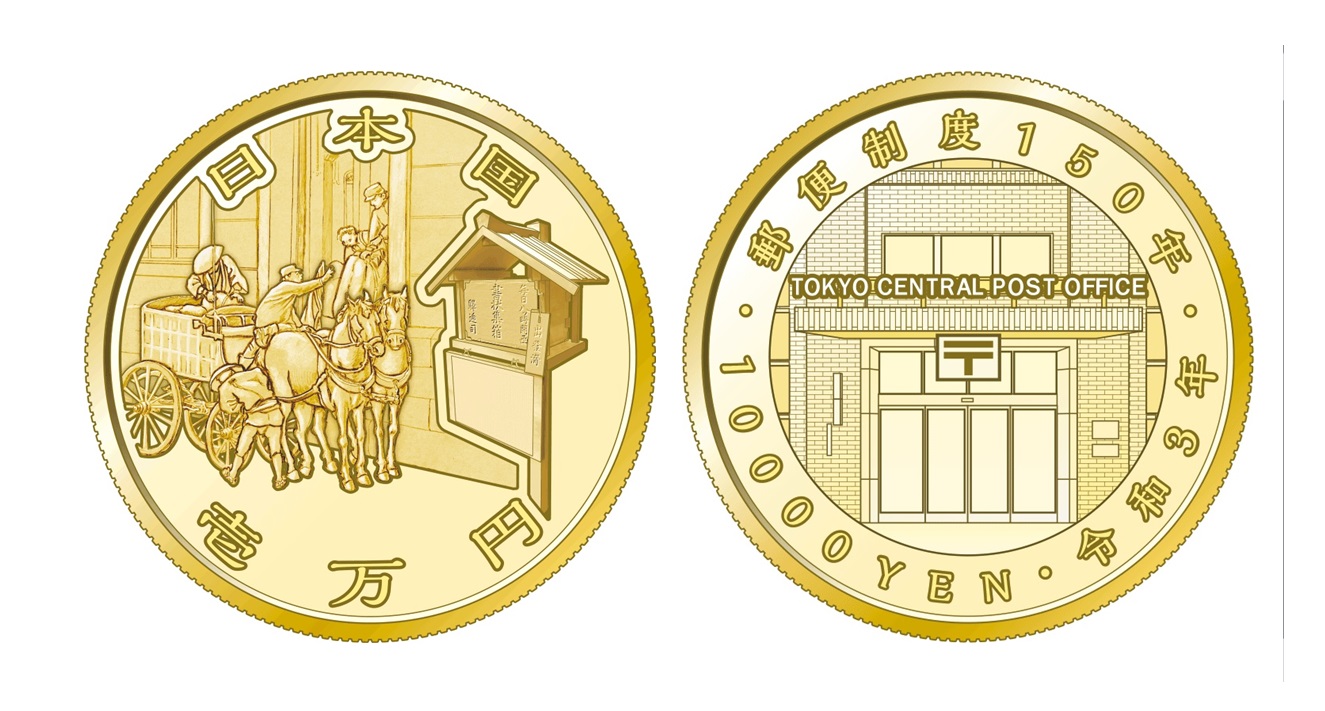 10,000-yen, gold: A scene from the Meiji-era mail delivery depicts a postal courier with horse and cart receiving mail bags from a depot. To the right of this scene is a traditional wooden letter collection box is depicted. The design also includes Japanese characters denoting the Bank of Japan and the coin’s denomination shown above and below the primary design. 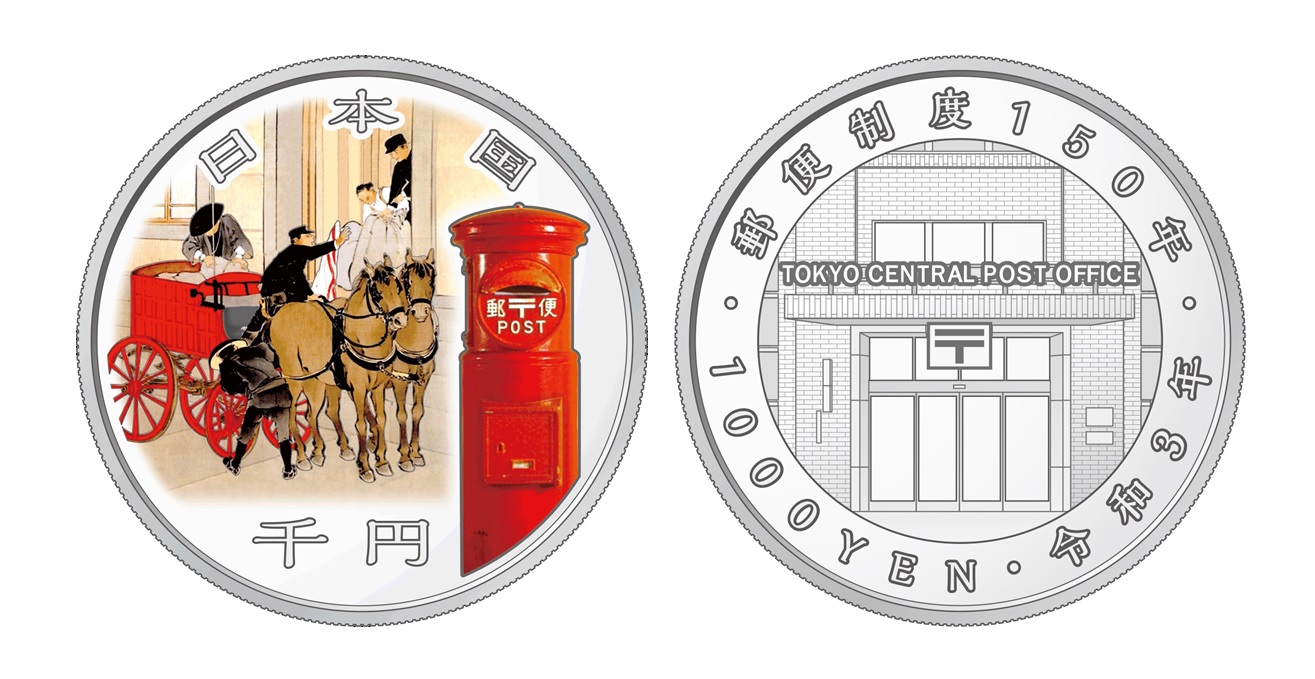 1,000-yen, silver: A scene with added and vivid colour from the Meiji-era mail delivery depicts a postal courier with horse and cart receiving mail bags from a depot. To the right of this scene, a red cast iron round letter collection box is depicted. The design includes Japanese characters denoting the Bank of Japan and the coin’s denomination shown above and below the primary design.

Both the gold and silver reverse design is shared and depicts the entrance of the distinctive former Tokyo Central Post Office. Above the primary design is the commemorative inscription in Japanese characters describing the 150th anniversary of the founding of the Japan Post. Below the design are the denominations of the coins, 10000 (gold) and 1000 (silver), as well as the regnal name of Emperor Naruhito, or Reiwa, and the year 3 of his reign.

The above commemorative coins can be purchased from the Japan Mint through mail-order sales for residents of Japan. For overseas inquiries, details such as how to apply will be announced on the Japan Mint website after 5:00 PM on Tuesday, 20th April 2021. For additional details, please visit here.