The Japanese Finance Ministry has announced (27th November) that gold and silver collector coins will be issued to celebrate next year’s Rugby Championships, which Japan will play host to from the 20th September to the 2nd November. This will be the first time the tournament is to be held in Asia, the first time consecutive tournaments have been staged in the same hemisphere, and also the first time that the event will take place outside the traditional heartland of the sport. Tokyo’s National Olympic Stadium, being rebuilt for the 2020 Summer Olympics, was originally the centrepiece of Japan’s Rugby World Cup bid, but revisions to the Olympic Stadium plans mandated World Cup venue changes. The announced and confirmed venues to host the tournament, which will include a total of 20 teams competing, are as follows:

In place of the National Stadium, the Ajinomoto Stadium in Chōfu — a suburb of Tokyo — will host the opening ceremony and opening match, while the Yokohama Stadium will host the final tournament.

The coins, issued in gold and silver, will be produced by the Mint of Japan at their facilities in Osaka on behalf of the Ministry of Finance, Japan. Special and selective technology will be used on the coins to add iridescent elements of the design, which will be seen on the reverse side of the gold coins and both sides for the silver coins, along with a colour depiction of the rugby logo.

10,000-yen gold: The obverse side features the Webb Ellis Cup trophy, which is given to the winning team, with the outline of a rugby ball behind the trophy. The reverse side includes the official logo of the Rugby World Cup championship along with text in English which reads RUGBY WORLD CUP JAPAN 2019. Between the word JAPAN and the year of 2019 are the two Japanese characters denoting the country of issue. Below the logo is the Japanese text denoting the 31st year of the reign of Emperor Akihito and the denomination of 10000 YEN with iridescent cherry blossoms placed on both sides of the primary design. 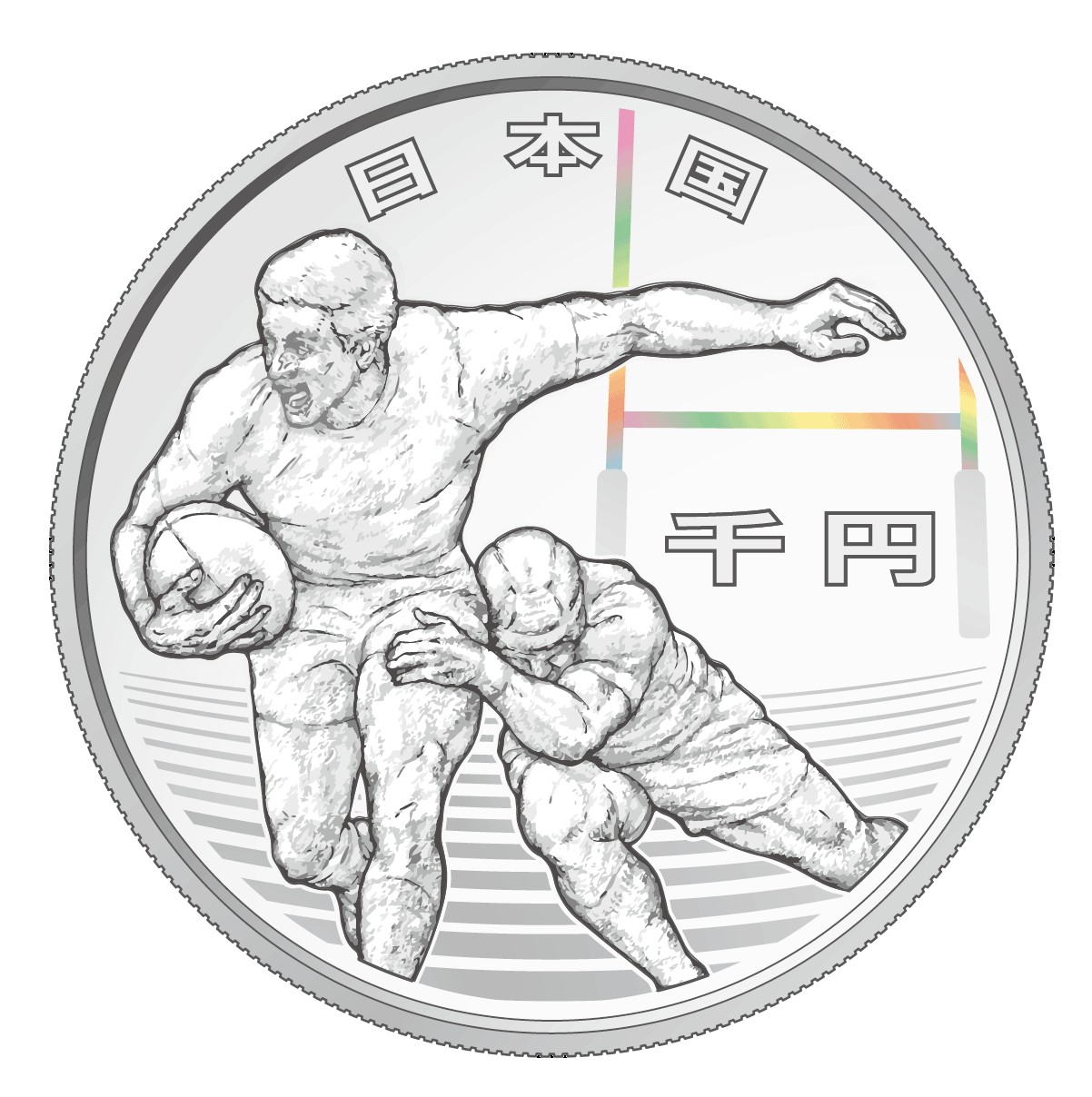 1000-yen silver: The obverse side includes two rugby players, one with the ball, the other tackling his opponent, and a goal post which is in the background andfeatures a multi-colour iridescent application. 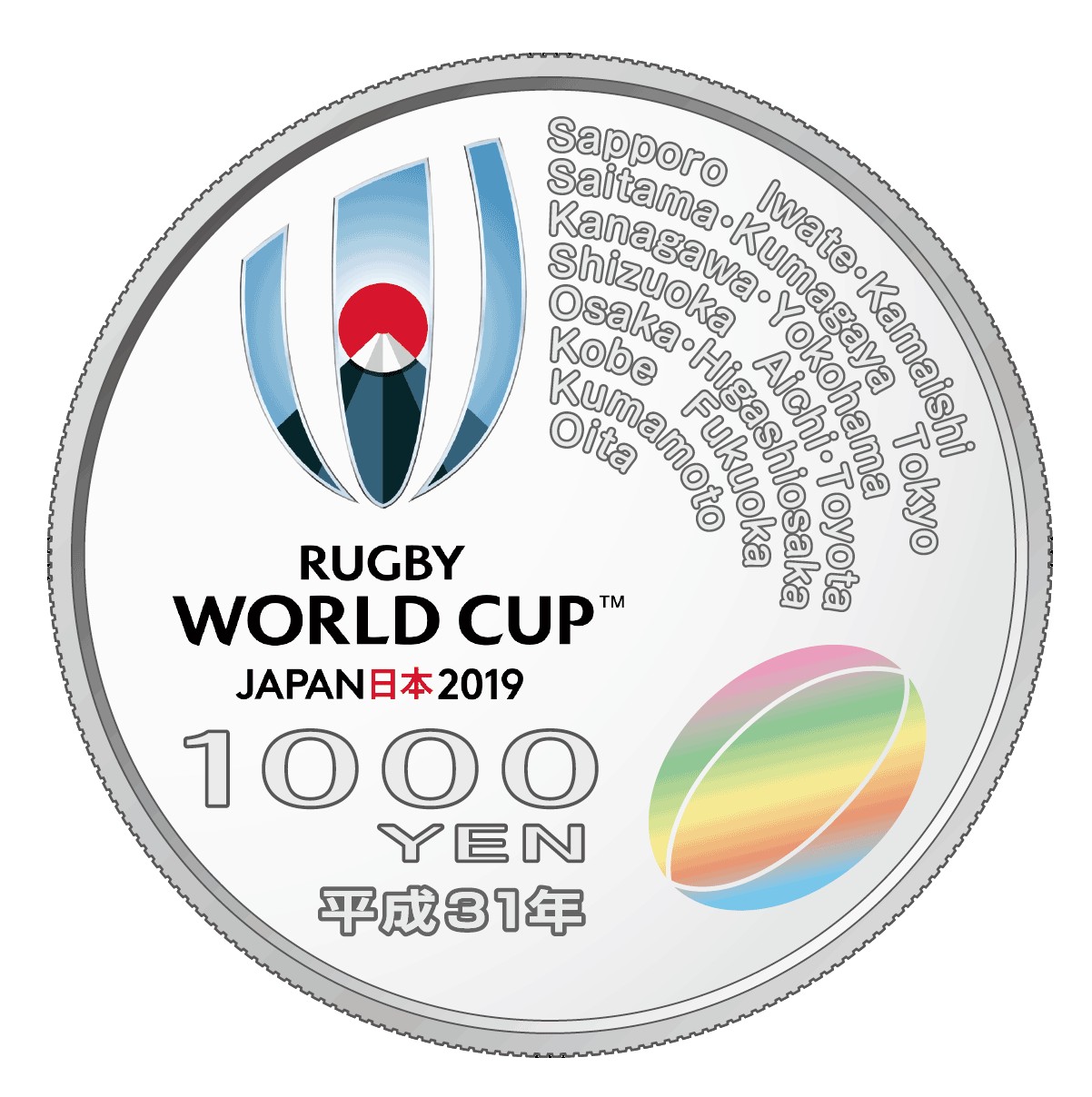 The reverse side includes the official logo of the Rugby World Cup championship along with text in English which reads RUGBY WORLD CUP JAPAN 2019. Between the word JAPAN and the year of 2019 are the two Japanese characters denoting the country of issue. Below the logo insignia is the denomination of 1000 YEN and below this is the Japanese text denoting the 31st year of the reign of Emperor Akihito. To the right is the shape of a rugby ball which is applied using an iridescent application. Located to the upper right is the text in English of all 12 cities which will play host to the various tournaments.

The coins will be available from the 15th March. Details of the sales method will be announced on the Mint’s website.

Japan: Gold coins celebrating the accession of Emperor Naruhito announced by the Ministry of Finance