On June 3, 2010, the United States Mint began sales of the latest issue of the First Spouse Gold Coin series featuring Jane Pierce. She was the wife of the 14th President of the United States, Franklin Pierce. 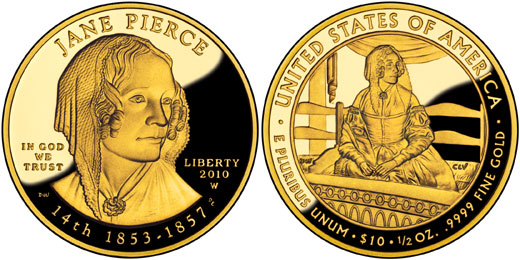 The Jane Pierce First Spouse Coin features her portrait on the obverse of the coin designed by Donna Weaver and sculpted by Don Everhart. Inscriptions indicate her name, order of the Presidency, years of the term, the date, and the words “In God We Trust” and “Liberty”. The reverse of the coin depicts Jane Pierce as she sits in the visitor’s gallery of the Old Senate Chamber listening to the debates. Surrounding inscriptions indicate the weight and purity of the gold content, legal tender value face, “United States of America”, and “E Pluribus Unum”. The reverse was also designed by Donna Weaver and sculpted by Charles L. Vickers.

Both proof and uncirculated versions of the coin are offered, produced at the West Point Mint. The maximum mintage across both versions has been set at 15,000, which is a reduction from maximum mintages established in prior years.

The coins are priced at $779 for the proof version and $766 for the uncirculated version, representing the highest initial offering price for any coin in the series. These prices are subject to potential adjustment under the US Mint’s numismatic gold coin pricing policy.

On the same date, the US Mint also began sales of a bronze duplicate version of the gold coin. The Jane Pierce Bronze Medals are struck at the Philadelphia Mint and feature the same design, but with some inscriptions removed. The medals are priced at $5.50 each.

The gold coins or medals can be ordered online at http://catalog.usmint.gov