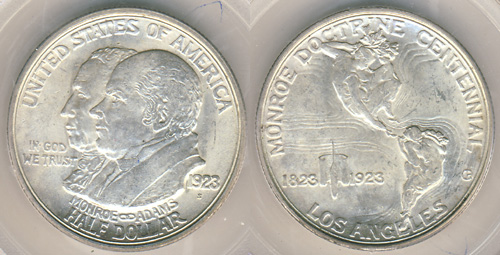 The current bill H.R. 2968 James Monroe Commemorative Coin Act would authorize up to 20,000 $50 gold coins containing one troy ounce of gold; up to 275,000 silver dollars; and up to 500,000 clad half dollars. The denomination for the gold coins would be unique amongst modern commemorative coins, which have carried denominations of either $5 or $10, and gold content of of 0.2418 or 0.4837 troy ounces.

Coins would be minted in proof and uncirculated qualities and may be issued during the one year period beginning on January 1, 2016. There is a requirement for one facility of the United States Mint to strike proof quality and at least one other facility to strike uncirculated quality coins for each of the three coins.

Pricing for the coins would include surcharges of $35 per gold coin, $10 per silver dollar, and $5 per half dollar. The surcharges would be distributed to the James Monroe Memorial Foundation for the development and continuing support of the reconstructed birthplace, supporting education programs, and collecting and preserving artifacts. 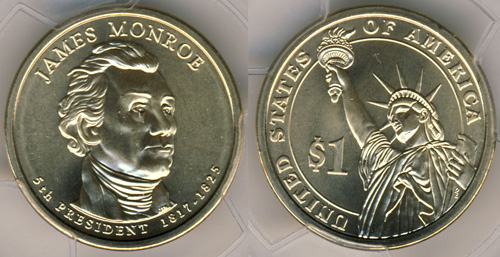 James Monroe has previously been depicted on the 1923 Monroe Doctrine Centennial Half Dollar, pictured at the beginning of the article, and on the 2008 James Monroe Presidential Dollar shown above.