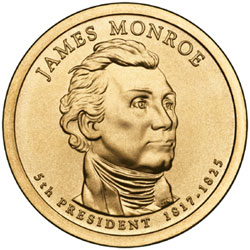 On December 16, 2009, H.R. 4329 was introduced, which seeks to authorize a commemorative coin program for President James Monroe. The bill was introduced in the House of Representatives by Rep. Rob Wittman of Virginia.

Before becoming the fifth President of the United States, James Monroe had actively served in the military during the Revolutionary War; served as governor of Virginia; member of the Continental Congress; United States Senator; Minister to France, England, and Spain; Secretary of State; and Secretary of War. During his two terms as President, he admitted Maine and Missouri as states, acquired Florida, limited the expansion of slavery, and promulgated the Monroe Doctrine.

James Monroe was previously featured on a circulating dollar coin released in 2008 as part of the Presidential $1 coin series. The commemorative coins would be issued in 2016, which will mark the bicentennial of his election as President.

The coins issued under the commemorative coin program would include a $50 gold coin with a weight of 33.931 grams, diameter of 32.7 mm, and one ounce gold content. These are the specifications of the one ounce American Gold Eagle bullion coin. Also included would be a $1 silver coin weighing 26.73 grams and measuring 1.5 inches in diameter, and a 50 cent clad composition half dollar weighing 11.34 grams and measuring 1.205 inches in diameter.

The bill H.R. 4329 includes some specific guidance on the designs of the James Monroe commemorative coins. The obverse of the coins would bear a profile image of James Monroe based on an 1830 portrait by Rembrandt Peale. The reverse of the coins would feature an image of the Monroe birthplace as drawn by the Colonial Williamsburg Foundation based on an etching published in 1830.

If the bill becomes law, it would create a commemorative coin program with some unique aspects. This would be the first commemorative coin issued with a $50 face value and one ounce gold content. All modern commemorative coins struck in gold have carried a $5 or $10 face value with gold content of 0.242 or 0.4837 ounces. Additionally, the design requirements are very specific and seem to apply to all coins issued under the program. This suggests that all three coins would have an identical or very similar design.