There will be a launch ceremony held for the release of the James K. Polk Presidential Dollar. This will be the eleventh release in the dollar coin series created to honor the former Presidents of the United States. 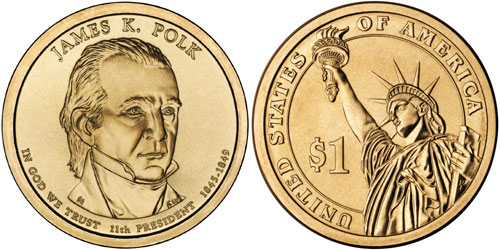 The launch ceremony will be held at the ancestral home of James K. Polk located at 301 West Seventh Street, Columbia, Tennessee 38401. The ceremony will take place on Thursday, August 20, 2009 at 10:00 AM CT. On the same date the coins will officially be released into circulation.

The ceremony will be presented by Andrew Brunhart, the Deputy Director of the United States Mint, and include a ceremonial “coin pour.” Children 18 years and younger will received a new Polk Presidential Dollar coin. Other attendees will have the opportunity to exchange currency for rolls of the new coins.