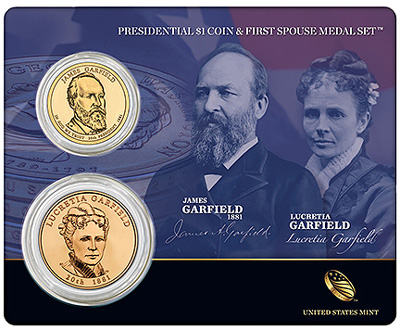 The set includes one uncirculated James Garfield Presidential Dollar and one Lucretia Garfield First Spouse Bronze Medal. The $1 coin features a portrait of the president on the obverse and an image of the Statue of Liberty on the reverse. The bronze medal is based on the design for the separately issued 22 karat gold coin featuring a portrait of the First Lady on the obverse and a scene of her painting on the reverse.

The coin and medal are mounted on a durable plastic card containing the images of the president and first lady on the front and issuance information as well as a certificate of authenticity on the back. The James Garfield Presidential $1 Coin & First Medal Set is priced at $14.95 and available for purchase online at http://catalog.usmint.gov/

The Treasury Department recently announced the suspension of production for additional Presidential $1 Coins for circulation. The US Mint facilities at Philadelphia and Denver had struck 74.2 million James Garfield $1 Coins for circulation prior to the announcement. The coins are also incorporated into various numismatic offerings such as the $1 coin and medal set, a first day coin cover released next week, numismatic rolls, and various uncirculated and proof sets.

For future releases of the Presidential $1 Coin Program, only the limited number of coins needed to satisfy demand from collectors will be produced. According to statements from the Treasury Department, these will be priced at levels to ensure that they do not result in a cost to taxpayers. The next issue of the series featuring Chester A. Arthur is expected to be available February 16, 2012.