The United States Mint began accepting orders for the James Garfield Presidential Dollar Coin Cover on December 29, 2011 at 12:00 Non ET. This is the twentieth release in the American Presidency $1 Coin Cover series, which began in 2007. 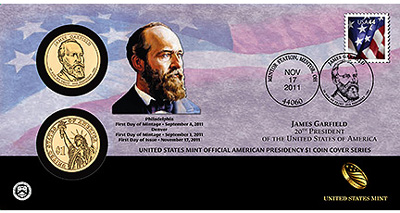 Each cover contains two James Garfield Presidential Dollars that were sourced from the first day of production at the Philadelphia Mint on September 8, 2011 and from the Denver Mint on September 1, 2011. These coins are mounted on a display card and placed within an envelope illustrated with a portrait of the former President.

A 44-cent postage stamp is affixed to each envelope and canceled with a postmark of “November 17, 2011, Mentor, OH”. This represents the first day of circulation release and the location of the official launch ceremony.

The James Garfield $1 Coin Covers are priced at $19.95 each. A maximum product limit of 22,000 has been established for this release.

Orders may be placed online at http://catalog.usmint.gov/