James Garfield was our 20th President. He served nine consecutive terms in the U.S. House of Representatives. He was a strong opponent of the “Greenback” during his Congressional service, calling it “the printed lies of the government”, and advocated for a bi-metal monetary system. He is the only President to be elected directly from the House of Representatives, and was, for a short period of time, a sitting Representative, a Senator-elect (having been elected by the Ohio state senate), and President-elect. His presidency was cut short by his assassination by Charles J. Guiteau, serving only 200 days. 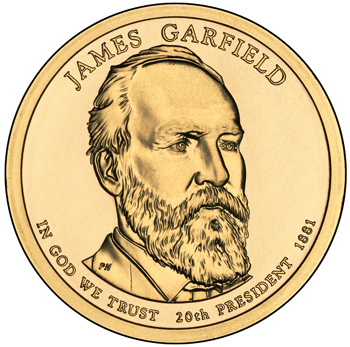 The coin bearing President Garfield’s’ image is the twentieth in the series of Presidential Dollar coins, and the fourth and last to be issued in 2011 Its obverse depicts Garfield, his time in office (1881), order of the Presidency, and the motto “In God We Trust”. The reverse shows the Statue of Liberty in the same design as been depicted on all Presidential dollars. The edge has the motto “E PLURIBUS UNUM”, the year of issuance, and the mint mark.

The James Garfield Presidential Dollar will be released for circulation November 17th, 2011. An official launch ceremony will be held the same day at 10:00 AM ET at the James A. Garfield National Historic Site in Mentor, Ohio.

The coins will also be available from the U.S. Mint in the following products: