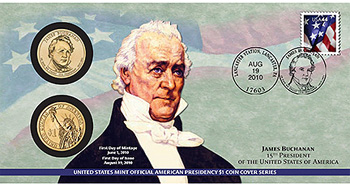 The covers include two James Buchanan Dollars sourced from the first day of production at the Philadelphia and Denver Mints. The coins are mounted on a display card within an illustrated envelope. A 44cent postage stamp is postmarked “August 19, 2010, Lancaster, PA”. This represents the official circulation release date for the James Buchanan Presidential Dollar.

The product is limited to a maximum of 32,000 units, and each cover is priced at $15.95 plus applicable shipping and handling. Orders may be placed at http://catalog.usmint.gov

Scheduled next for release in the series will be the cover featuring the Abraham Lincoln Dollar. This is expected to be a more popular release. The first cover released in the series featuring George Washington had sold out of the entire 50,000 maximum production.