The medal was authorized to be awarded under Public Law 113-210, enacted on December 16, 2014. The medal is awarded in recognition of his service to the Nation in promoting excellence, good sportsmanship, and philanthropy.

During his competitive career which spanned parts of five decades, Jack Nicklaus accumulated 120 victories in national and international competitions, 73 of which were won on the Professional Golfers Association TOUR. His record 18 professional major championships remains the standard by which all golfers are measured today. A passionate philanthropist, Nicklaus has made a lifelong commitment to numerous charities, most of which support pediatric healthcare. 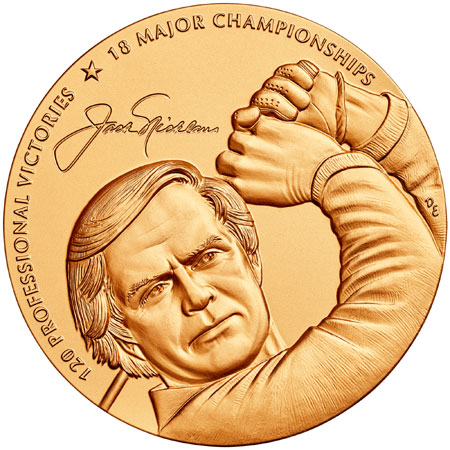 The obverse of the medal, which was designed and engraved by Don Everhart, features a portrait of Jack Nicklaus, his signature, and the inscriptions “120 PROFESSIONAL VICTORIES” and “18 MAJOR CHAMPIONSHIPS”. 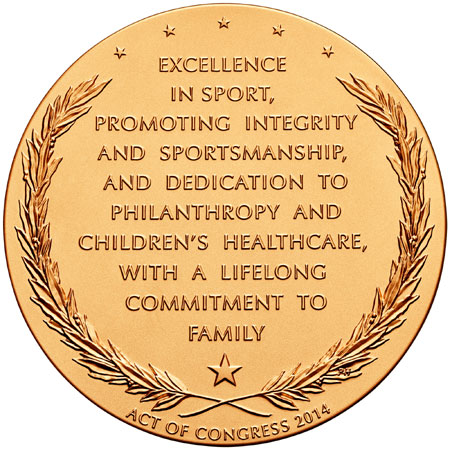 The reverse, which was designed and sculpted by Phebe Hemphill, includes two laurel leaves and six stars representing Jack Nicklaus’ five children and his wife Barbara. The inscriptions read “EXCELLENCE IN SPORT, PROMOTING INTEGRITY AND SPORTSMANSHIP, AND DEDICATION TO PHILANTHROPY AND CHILDREN’S HEALTHCARE, WITH A LIFELONG COMMITMENT TO FAMILY” and “ACT OF CONGRESS 2014”.