On September 23, the Istituto Poligrafico e Zecca dello Stato (Italian State Mint) issued this year’s second coin in the popular and successful “Italy of Art” series. This, the larger coin of the two, focuses on the incomparable history and beauty of the island of Sardinia. (Scroll to the bottom of the page for more about the region.)

The coin is of Proof quality with frosted relief and a mirrored field. Both faces were designed by artist Mariangela Cassol; the obverse includes an effigy based on an original Sardinian bronze statuette of a Nuragic warrior. The Nuragic civilization flourished in Sardinia from about 1700 BC to about 200 AD; the well-known figures are on display at the Museo Nazionale Preistorico Etnografico, Rome. In the background is a circular geometric design from a Nuragic terra-cotta “pintadera” (a small clay disc impressed with symmetrical designs; the utility of these objects is unknown). At lower right within the pattern is the designer’s name, CASSOL. Surrounding the field is the legend REPUBBLICA ITALIANA.

Depicted on the reverse is a Sardinian bronze statuette of an archer that is on display at the Museo Archeologico Nazionale in Cagliari. In the background is a transenna—a geometric lattice or screen of stone shown on a bronze Nuragic-era votive boat. In the upper field in three lines is the legend ITALIA / DELLE / ARTI. At near left, within the archer’s bow, is the year of issue, 2016; at far left, behind the archer’s head, is the letter R, signifying the Mint of Rome. In the lower half of the field is the denomination, 10 EURO, with SARDEGNA below.

This is the 14th coin in the “Italy of Art” series, which began in 2010 and is one of the IPZS’s more popular series with collectors. For more information on this and other coins offered by the IPZS or Italian State Mint, please visit their website. International sales dispatched where applicable.


Sardinia and the Nuragic Era 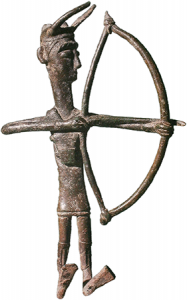 An autonomous state within the Republic of Italy, Sardinia is the second largest island in the Mediterranean Sea—after Sicily and before Cyprus—with an area of 24,100 square kilometers (9,305 square miles). Sardinia is also one of the most beautiful and fascinating islands in the Mediterranean. It features uncontaminated coasts all along its perimeter; the wild, ancestral landscape of its inland area; a culture deeply influenced by Phoenician, Greek, Carthaginian, and Roman civilizations; and extraordinary prehistoric structures of the Nuragic sites.

Of particular interest to visitors to this distinctive cultural and linguistic part of Italy are the prehistoric finds, which have documented the extraordinary civilizations that have come and gone during the last 6000 years. The Nuragic era depicted on the Italy of Art coins takes its name from the Bronze-Age nuraghi (rounded stone structures) constructed by its people. The purpose of these structures, like that of the clay pintadera discs, is unknown. They may have housed rulers, religious leaders, or other individuals, or served as meeting halls or fortresses.
Share: