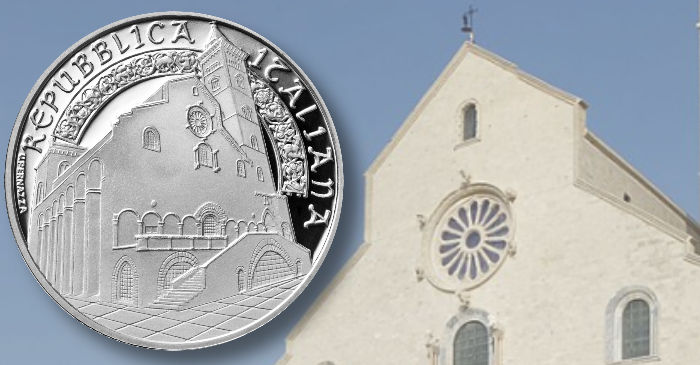 The Istituto Poligrafico Zecca della Stato (IPZS) has released new collector coins (9th July) which are in tribute to historic Italian art and also highlight some of the extraordinary architecture found in the country. These are the latest coins which are part of the series entitled “Italy of the Arts,” begun in 2010, and remains one of the IPZS’s most popular series with collectors.

The new silver Proof coins feature the Cathedral of Santa Maria Assunta of Trani that is built on the edge of the beautiful Adriatic Sea and stands out above a strip of land stretching over this body of water. Due to its location, this fine example of Romanesque-Apulian architecture, made of a light coloured limestone, has become one of the most famous cathedrals in the world and is regarded as a sentinel guarding the town. This extraordinary structure began as a Roman catacomb in honour of Saint Leucius, and in the sixth century, the catacomb became a crypt under a new cathedral dedicated to the Holy Virgin.

When the crusades converged on the east coast of Puglia, the town found itself being visited by a young man from Greece who entered Trani. His name was Nicola, referred to as the pilgrim (or il pellegrino), it is said he may have had an ability to charm and influence the people of Trani. Born in the little village of Steiri in Boeotia, Greece, Nicola lived a solitary life as a shepherd, which led him to contemplative spirituality. His solitary existence brought him into conflict in populated places and he suffered oppression. With his death in 1094, he was later canonized in 1099, and it was at this time that the cathedral was rebuilt and dedicated to his memory, replacing that of St. Leucius. Nicola is also the patron saint of the city, and his feast day is celebrated on the 2nd June with the annual procession through Trani in his honour being held in the last week of July. Although venerated in the Catholic Church, in the Orthodox tradition, he is regarded as a “holy fool.” The term “fool” connotes what is perceived as feeblemindedness, and “blessed” or “holy” refers to innocence in the eyes of God.

The Church itself is as spell-bounding as it is beautiful, with a façade that seems more Pisan in style and features a rose window decorated with zoomorphic figures. A double-ramped staircase leads up to the bronze portal, created by the sculptor Barisano da Trani in 1180, while a bell tower overlooks as far as the eye can see and dominates the building. Inside the cathedral is a series of paired columns which divides the interior into two aisles and a nave, complementing the sober decor which creates an air of great spirituality in the upper church. From a further inlet, you can enter the first crypt — the Church of Santa Maria — which retains portions of its original mosaic floor. An impressive staircase leads to the second crypt, which is dedicated to San Nicola Pellegrino and is where the saint’s remains are interred. On the lower level is a subterranean structure of San Leucio, which extends beneath sea level.

The coin is designed by Uliana Pernazza, whose obverse design includes a depiction of the Cathedral of Santa Maria Assunta, a masterful example of Apulian-Romanesque architecture. Arch-shaped decorations drawn from the cathedral’s sculptures are seen in a semi-encircle around the primary design. Around the edge and above is the inscription REPUBBLICA ITALIANA, and on the left is the name of the designer, U. PERNAZZA.

The reverse design includes a composition of architecturally decorative elements from the Apulian-Romanesque Cathedral. In the centre of the coin within a concentric frame is the inscription ITALIA DELLE ARTI and the value of 10 EURO. On the left of the primary design is the vertically placed year of issue, 2018, and on the right is the letter “R,” identifying the Mint of Rome. Below is the inscription of TRANI.

Each coin is encapsulated and housed in a branded IPZS custom case, which is also accompanied by a numbered certificate of authenticity. For additional information on this coin and others available from the IPZS, please visit their website.