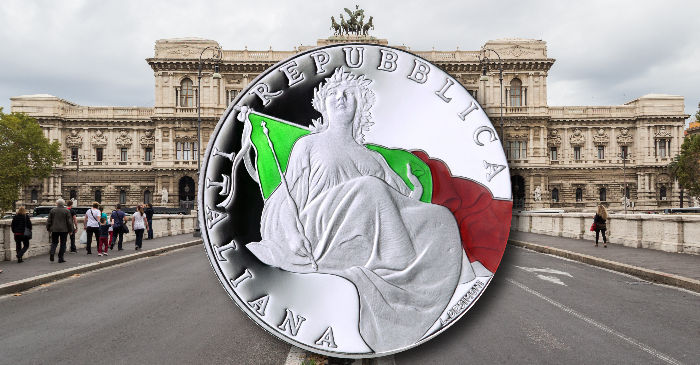 The Istituto Poligrafico e Zecca dello Stato (IPZS) have released (2nd January) a new silver coin which is in celebration of the 70th anniversary of the Italian constitution, which came into force on the 1st January 1948. Italy’s post-war constitution was written by the 556 deputies in the Italian senate and Chamber of Deputies which the Italian people elected to their first Constitutional Assembly on June 2, 1946.

The assembly approved the constitution on the 22nd December 1947, by a vote of 453 in favour and 62 against. Italy’s post-war constitution was especially important as it recognised two significant changes to the country. First, it was written after the national referendum which decided the future of the Italian monarchy, which was also held on the 2nd June 1946. The results were in favour of a Republic by 54.3 percent, to 45.7 percent in favour of the monarchy. King Umberto II, Italy’s last sovereign who had succeeded his father King Victor Emanuel II, on his abdication had officially reigned for just 34 days from the 9th May to the 12th June. The Italian monarchy formally ended on 12th June of that year, and Umberto II left the country. Second, the constitution would define the direction of the country after its disastrous participation in the Second World War and would specifically determine the responsibilities of both the head of state and the head of government to deter any further instances of dominance from either office.

The present constitution is composed of 139 articles (five of which were later abrogated) and arranged into three main parts:

The Principi Fondamentali (the Fundamental Principles) of articles 1–12. Part I pertains to the Diritti e Doveri dei Cittadini (Rights and Duties of Citizens).

Articles 13–54 and part II, the Ordinamento della Repubblica (Organisation of the Republic).

The constitution primarily contains general principles, and as such, is not possible to apply them directly as general law. As with many written constitutions, only limited articles are considered to be self-executing while the majority require enabling legislation.

The coin is designed by Luciana De Simoni and includes a seated allegorical female figure representing Italia. The colours of green and red, two of the three colours which comprise the Italian flag, are depicted as a cloak around Italia. The text REPUBBLICA ITALIANA is placed around the primary design.

The reverse side depicts a representation of the constitution in the form of a book along with the figure of a triumphant Italy holding a sprig of Italian stone pine. The design is completed by the star of the Italian Republic and a detail from a fresco by Cesare Maccari. The text SEI LIBERA SII GRANDE (You are free, be Great) is placed around the primary design along the rim with the commemorative inscription COSTITUZIONE ITALIANA 1948 2018 placed over the open book arranged in three lines. The denomination of 5 EURO is placed just above the commemorative inscription and the mint mark R is just below the open book.

The coin is housed in a capsule and custom box along with a certificate of authenticity. For additional information on this coin and others available from the IPZS, please visit their website.