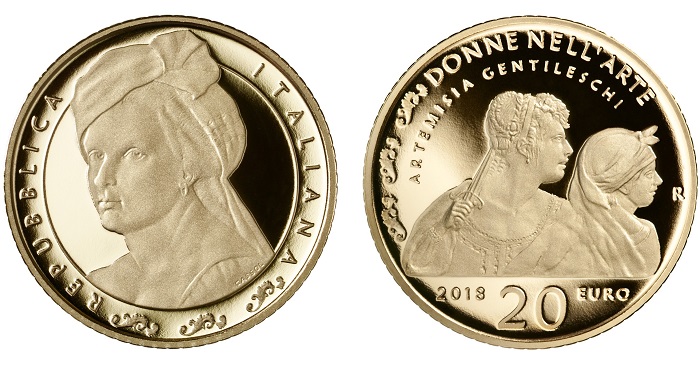 The Istituto Poligrafico Zecca della Stato (IPZS) has released new gold collector coins (9th July) in their “Women in the Arts” series, with a coin dedicated to the talents and memory of Artemisia Gentileschi (1593–1653).

Considered one of the most accomplished painters in the generation following Caravaggio, through the works of Artemisia Gentileschi, an extraordinary journey unfolds into the Baroque art of the 17th century. Her original and sublime painting technique combines the experience of her contemporaries with that of the old masters. An amazing artist and a woman of temperament, she would later be seen as an icon of women struggling for their talent to be recognised. Artemisia tells the story of a courageous and determined woman and enchants with the use of colours, light effects, and shadows, reminiscent of Caravaggio.

The obverse, which is designed by artist Maria Angela Cassol, includes a detail from the self-portrait of Artemisia Gentileschi as a woman playing the lute and wearing a turban. The painting is now part of the collection of the Wadsworth Athenaeum Museum, Hartford, United States. Encircling the design is the inscription REPUBBLICA ITALIANA, along with decorative elements. In the lower right of the depiction of Gentileschi is the name CASSOL, in reference to the coin’s designer.

The reverse includes a detail from the painting Judith and her maid with the head of Holofernes, which is part of the Palatine Gallery, Palazzo Pitti, in Florence. Above the primary design is the inscription DONNE NELL’ARTE and ARTEMISIA GENTILESCHI, seen in two rows. To the right of the design is the mintmark letter “R,” identifying the Mint of Rome. Placed below the design is the coin’s face value of 20 EURO and the year of issue, 2018.

The coin is encapsulated and housed in a branded IPZS custom case and is accompanied by a numbered certificate of authenticity. For additional information on this coin and others available from the Istituto Poligrafico Zecca della Stato (IPZS), please visit their website.