On September 6, the Istituto Poligrafico e Zecca dello Stato (Italian State Mint) issued the latest coin in the popular and successful “Italy of Art” series. The new issue highlights the lovely town of Recanati, located in the Province of Macerata.

Officially founded in the middle of the 12th century, Recanati (pictured above) probably originated from the ruins of an ancient Roman town known as Ricina. Known as a city of art, rich in Renaissance and Baroque palaces and wonderful examples of religious architecture, Recanati is also famous for being the hometown of Count Giacomo Leopardi, one of the greatest Italian poets.

The silver coin, designed by artist Ettore Lorenzo Frapiccini, depicts on the obverse the complex of St. Augustine with the façade of the church, the cloister, and the bell tower. This particular church is famous for being celebrated in Leopardi’s poem “Passero Solitario” (“The Lonely Sparrow”). In the foreground to the right is the municipal coat of arms, with a lion rampant. Around the edge above is the text REPUBBLICA ITALIANA, with 2016 below.

The reverse side includes a detail from Lorenzo Lotto’s painting The Annunciation, which is housed at the Museo Civico Villa Colloredo Mels of Recanati. Around the edge on the upper left is the series name, ITALIA DELLE ARTI; below, in two lines, are the name of the town and the denomination. The mintmark R in the lower left field signifies the Mint of Rome. 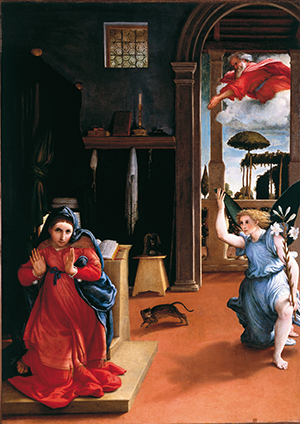 The Annunciation, by Lorenzo Lotto

The “Italy of Art” series began in 2010. One of the Italian State Mint’s more popular series, it offers insights into Italy’s many treasures. An additional €10 silver coin, to be issued on the September 23, will highlight the beautiful region of Sardinia.

For more information on this and other coins offered by the Italian State Mint, please visit their website. International sales dispatched where applicable.