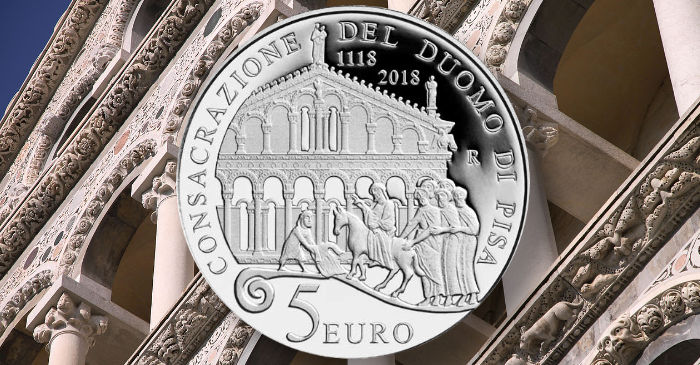 The Istituto Poligrafico Zecca della Stato (IPZS) has released new collector coins (4th May) which mark the 900th anniversary year of the consecration of the medieval cathedral of Santa Maria Assunta in Pisa. The Cathedral of Santa Maria Assunta, along with the Baptistery and the famous Leaning Tower, bear witness to the prestige achieved by the city as one of the most important maritime republics. Architect Buscheto started building this masterpiece of Pisan Romanesque architecture in 1063 as an extraordinarily harmonious combination of classical, Gothic, Lombard-Emilian, Byzantine, and Islamic elements. Begun in 1063 by the architect Buscheto (although very little about him is known), by the year 1110 he was still alive, as reported by some documents kept in the archives of the Opera della Primaziale Pisana. It was recorded that he was son of the judge Cavalier Giovanni. Additional historical documents provide proof of his presence as a procurator of the Canonica as a member of the Opera del Duomo of Pisa. His name is thought to have been of Greek origin and he himself was probably of Byzantine origin. Taking into account the average life of a person of the 12th century, it is believed that Buscheto began his career as an architect at a very young age, and the cathedral of Santa Maria Assunta was probably his only work.

The church was erected in an area outside the city walls to demonstrate that Pisa’s power did not necessitate any special protection. The cathedral over time came to embody a diversity of styles such as classical, Lombard-Emilian, Byzantine, and Islamic, which became a testimony of the international importance of the city’s merchants at the time. The cathedral was officially consecrated in 1118 by Pope Gelasius II, who reigned from the 24th January 1118, to his death on the 29th January 1119. The cathedral was later extended and renovated in the first half of the 12th century under the direction of architect Rainaldo, who devised the current facade in grey and white marble, decorated with coloured inserts.

The three doorways are found beneath four orders of loggias, divided by cornices with marble inlay, behind which single, double, and tri-mullioned windows open out. The door of San Ranieri is decorated with 24 panels depicting stories from the New Testament. The Cathedral’s location was situated in the centre of the Piazza dei Miracoli, which is today a UNESCO Heritage Site. 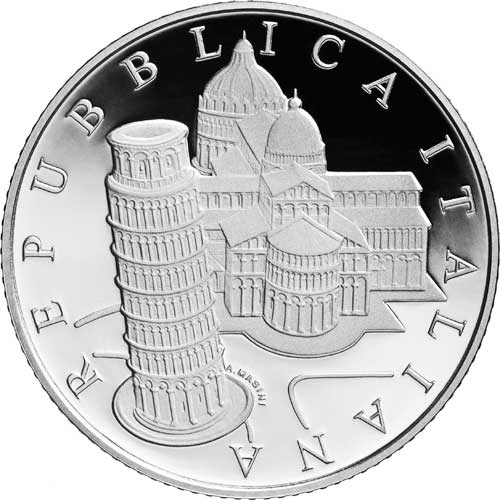 The coin is designed by artist Annalisa Masini whose obverse depiction includes a view of the Piazza dei Miracoli with the Baptistery, the Leaning Tower, and Pisa Medieval Cathedral of Santa Maria Assunta. At the base of the Leaning Tower is the name of the designer A. MASINI, and around the primary design is the inscription REPUBBLICA ITALIANA. 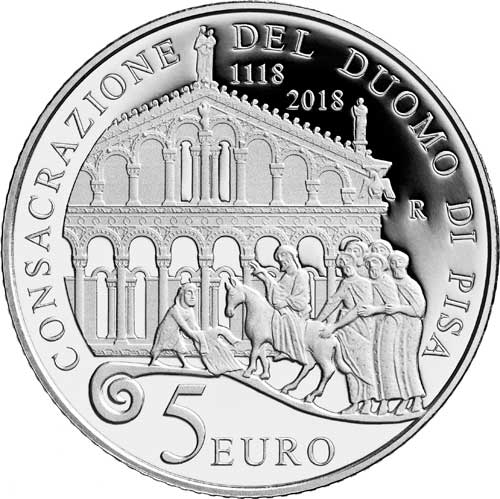 The reverse includes a detail from Pisa Cathedral flanked by a bronze tile from the cathedral’s door of Saint Ranieri by Bonanno Pisano. Above the design are the dates 1118 2018, which are the year of the cathedral’s consecration and that of the coin’s issue respectively. Below the primary design is the value, 5 EURO, and encircling the coin is the inscription CONSACRAZIONE DEL DUOMO DI PISA.

The coin is encapsulated and housed in a branded IPZS custom case and accompanied by a numbered certificate of authenticity. For additional information on this coin and others available from the IPZS, please visit their website.