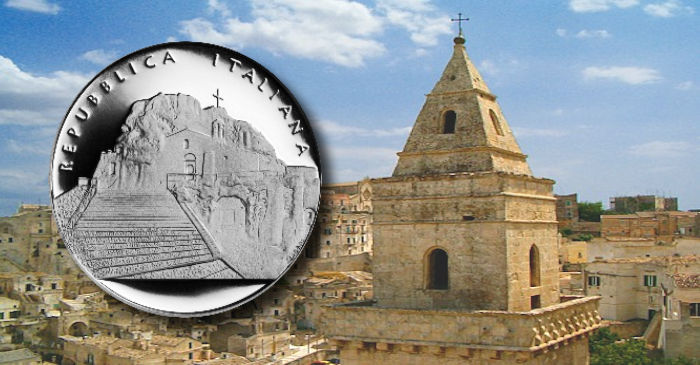 The Istituto Poligrafico Zecca della Stato (IPZS) have released (19th September) a new €10 silver Proof coin which is part of the massively successful series “Italy of the Arts.” This year’s coin is dedicated to the artistic town of Matera, located in the southern region Basilicata. Considered one of the most interesting, unusual, and memorable tourist destinations in Italy, the remote southern region of Basilicata (also referred to as Lucania) continues to be less frequently visited by foreign travellers. The town of Matera is famous for its extensive cave-dwelling districts, known as the Sassi. Curious and adventurous visitors can stay in these caves, wander the lanes alongside the picturesque cave-filled cliffs, and learn all about the history of this fascinating place.

It is extraordinary to believe that the caves of Matera were continuously inhabited for centuries, some of the caves being humble and some being very decorative residences. By the early 20th century the area was plagued with conditions approaching poverty. As a result, in the 1950’s, hundreds of families who were still living in crowded conditions were forcibly moved to modern buildings on the plateau above. However, by the 1980’s, the abandoned caves of Matera were no longer considered unsafe and hazardous, but were restored as fascinating reminders of the past. A few of the more well-to-do residents have since moved back and renovated their old cave homes.

In Matera, there are also many churches that were cut into the rock of hillsides and ravines. They were mostly created by Basilian monks who were fleeing the iconoclastic persecutions in the Byzantine Empire during the eighth and ninth centuries. It is well worth visiting one or two of these atmospheric ancient places of worship—but one of the more well-known churches in Matera is actually not a rock church.

The coin, designed by Maria Angela Cassol, depicts the San Pietro Caveoso, which was built in a picturesque spot on a rocky spur above the ravine. It is a charming, small building with a welcoming atmosphere and includes simple folk-art decorations and touching images of saints. Around the primary design is the inscription REPUBBLICA ITALIANA and on the right side is the name of the designer, CASSOL. 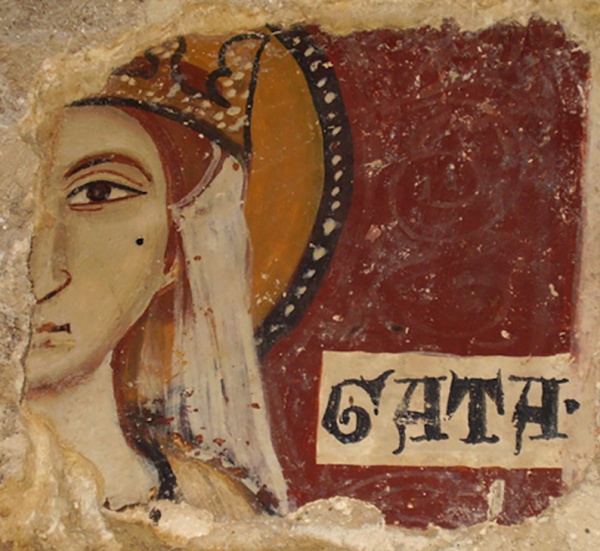 Fresco of Saint Agatha in the Santa Lucia alle Malve, on which the obverse of the coin is based. (Photo courtesy of sassiweb.com)

The reverse includes amazing detail from a fresco in the rock-church of Santa Lucia alle Malve. On the left of the primary design is the letter R identifying the Mint of Rome, the coin’s issue-year of 2017, and the value 10 EURO. Above the design is the arch-shaped inscription ITALIA DELLE ARTI and MATERA.

Matera, a town in Italy dating back over 9,000 years, has been designated the European Capital of Culture for 2019. The famous Sassi, and images of the Stones of Matera, was designated a UNESCO World Heritage site. The coin is available directly from the website of the IPZS.