The IPZS (Istituto Poligrafico e Zecca dello Stato) or the Italian State Mint have issued a new silver coin which remembers the 100th anniversary of Italy’s entry in the Great War. One hundred years ago, on the 24th May 1915, the Kingdom of Italy entered World War I that tragically involved twenty-eight countries and inexorably changed their destiny. The defeat during the battle of Caporetto where Italian losses were enormous was the most difficult moment for Italy, but the Italian resistance on the Piave front represented its revenge. A coin now rekindles its historical memory to foster peace. The Great War concluded in November 1918 and was thought to have been the war to end all wars. However, just 21 years later, the Great War was later referred to as the First World War as Europe and the world embarked on another global conflict commenced in 1939 which lasted for nearly six years. The Second World War has thus far, been the last substantial conflict on the continent of Europe seen for 70 years as much of Europe marks the longest spans of time without a war this year, 2015. 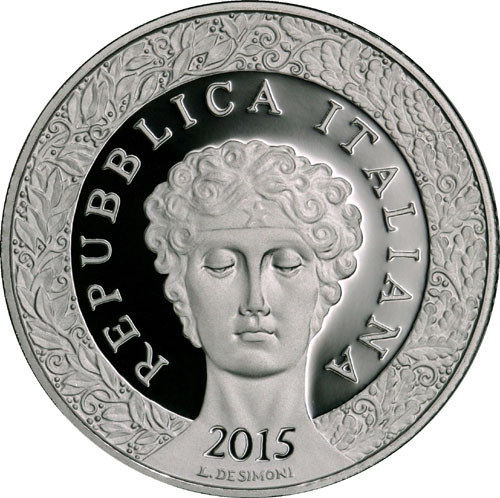 The obverse of the coin includes a classically designed front-facing bust representing Italy in melancholic or mournful pose, her head wrapped with a band and a five-pointed star. The work is inspired by the Vittoria Alata which was sculpted by Cesare Busnelli for the War Memorial of Meda. The circular inscription “REPUBBLICA ITALIANA” is placed around the bust with a garland of olive branches on the left and oak branches on the right symbolizing strength and glory. At the base of the bust is the year of issue “2015” and name of the designer “L. DE SIMONI”. 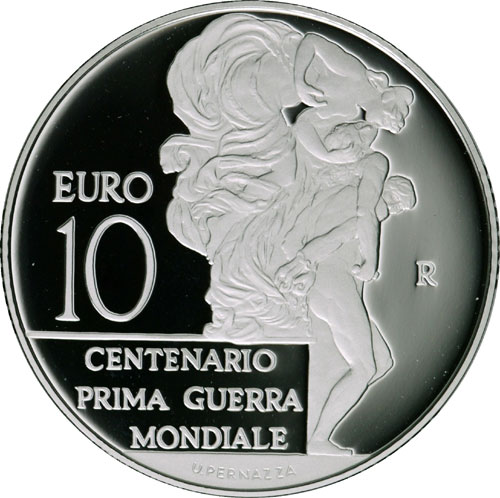 The reverse includes the sculptural group Sacrifice created by Leonardo Bistolfi for the monument erected in Rome in honor of HM King Victor Emmanuel II, first king of a united Italy. The sculpture represents a dying hero supported by a man unchained by his sacrifice, who is kissed by a feminine figure embodying Liberty and Family. On the left is the value “EURO 10” at the base of the sculpture. The inscription “CENTENARIO PRIMA GUERRA MONDIALE” and name of the designer “U. PERNAZZA” is on the right. The letter “R” identifies the Mint of Rome.

This silver coin is offered with a very low mintage and is available from the 5th May. For more information on this and other coins issued by the IPZS, please visit their website at: http://www.zecca.ipzs.it/servlet/articoli?indiceTipo=0&indiceArti=361&indicePezzo=0  Information offered in English and Italian, international orders dispatched.