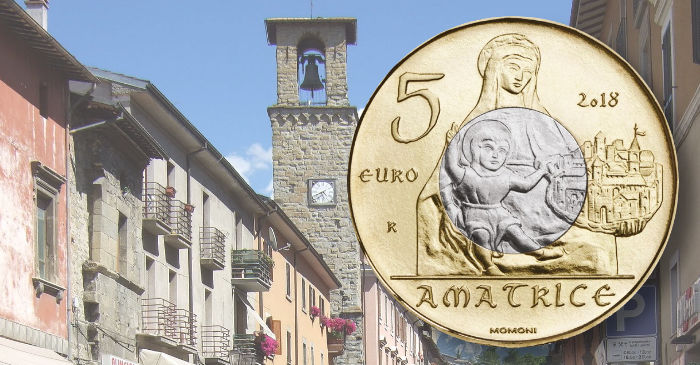 The Istituto Poligrafico Zecca della Stato (IPZS) has released (6th August) new collector coins which pay special attention to the splendid architectural riches of the town of Amatrice. Since 2015, Amatrice was recognised by Italians as among one of “the most beautiful villages of Italy,” and this is due to their renowned medieval historical centre, in addition to its famous culinary specialty, the “bucatini all’amatriciana.”

On the morning of the 24th August 2016, the town was struck by a severe earthquake that caused the death of hundreds of victims and destroyed most of the buildings, including examples of great architecture like the churches of St. Augustine and St. Francis. The magnitude was measured as 6.2, and as it had struck Central Italy, with surrounding areas feeling the tremors as far away as Rome, the epicentre seemed to be the small town of Amatrice. When the reality set in and officials were assessing the damage and determining the loss of life, much of the beautiful hill town set in the Latium Apennines was reduced to mere rubble. Thousands were left homeless from leveled homes, or if the buildings sustained enough damage that it was deemed either too dangerous or unsuitable to inhabit. Ultimately, 289 people lost their lives, and although this was a tragedy in itself, officials feared the loss of life to be far greater than recorded.

After the tremors ceased and the clearing of much of the rubble was completed, great efforts have taken place to restore and rebuild as much of these architectural treasures as possible. Italian authorities were, in a small way, prepared for what would come next, having had to deal with a very similar event in the town of I’Aquillia, which experienced a devastating earthquake in 2009 — less than 30 kilometres away from this devastation. As the reconstruction continues in both towns, the residents of Amatrice are hoping to restore a particular symbol in their once-picturesque town — the Church of Saint Augustine — which had for centuries been the centre of life and culture.

The coin is designed by Claudia Momoni. The obverse of the new bi-metallic multi-sided coin depicts the Church of Saint Augustine, which is a fine example of Abruzzo Gothic-Romanesque architecture. In the background is a detail from the rose window on the façade of the church. Around the perimeter of the design is the inscription REPUBBLICA ITALIANA, and placed below is an architectural detail from the church.

The reverse includes a detail from the fresco featuring the Madonna and Child enthroned, and are relevantly depicted holding the city, which also includes the Church of Santa Maria delle Grazie. On the left of the design is the value of 5 EURO and the letter “R”, identifying the Mint of Rome. On the right side is the year of issue, 2018, and below the primary design is the inscription AMATRICE in stylised letters. Under this is the name of the designer, MOMONI.

The coin is presented in a heat-sealed coin-card format and includes the specifications of the coin and graphics seen in the designs of the coin. For additional information about this coin and others available from the IPZS, please visit their website.