The Istituto Poligrafico Zecca della Stato (IPZS) has made released new gold collector coins (18th June) which are part of the ongoing Europa “the Ages of Europe” Star series highlighting the various eras of European civilisation. The specific ages, or epochs, are taken from the seven eras depicted on the euro-zone banknote series introduced in 2002. The common theme for the 2019-dated series focuses on the Renaissance, which was prevalent in Europe from the 14th century to the 17th century, promoting the rediscovery of classical philosophy, literature, art, and social life. The Italian contribution is dedicated to one of the Renaissance’s most prolific and renowned artists, Tintoretto (1518-1594), remembered today as one of the greatest painters of the Venetian school and is regarded as the last great painter of the Italian Renaissance.

Born Jacopo Robusti (Comin) on the 29th September 1518, the family’s name was believed to have been Robusti, but later in his adulthood, he took the name Tintoretto (“little dyer”), referencing his father’s profession as a cloth dyer (from the word “tintore” in Italian). The family originated from Brescia, in Lombardy, then part of the Republic of Venice. Even during his early childhood, it seemed that Jacopo was a natural-born painter, who was often dabbing paint on the dyer’s walls. His observant father not only realised his son’s potential as an artist, but he also encouraged it by taking him to the studio of Titian to see whether he could be trained as a painter. This time is believed to have been around 1533 when Titian was already approaching the age of 56 years.

Deeply influenced by the likes of Titian, Tintoretto wanted to combine Titian’s use of colour with the energised forms of Michelangelo. The style of Tintoretto’s works is usually described as Mannerist, an idealisation of the human form, to a great extent derived from the precedent of Michelangelo. The number of Tintoretto’s portraits is enormous, and in terms of their importance of artistic importance, their merit is unequalled. Though the exceptional works cannot be surpassed, Sebastiano del Piombo (1485-1547), an Italian painter of the High Renaissance, remarked that Tintoretto could paint in two days as much as himself in two years. 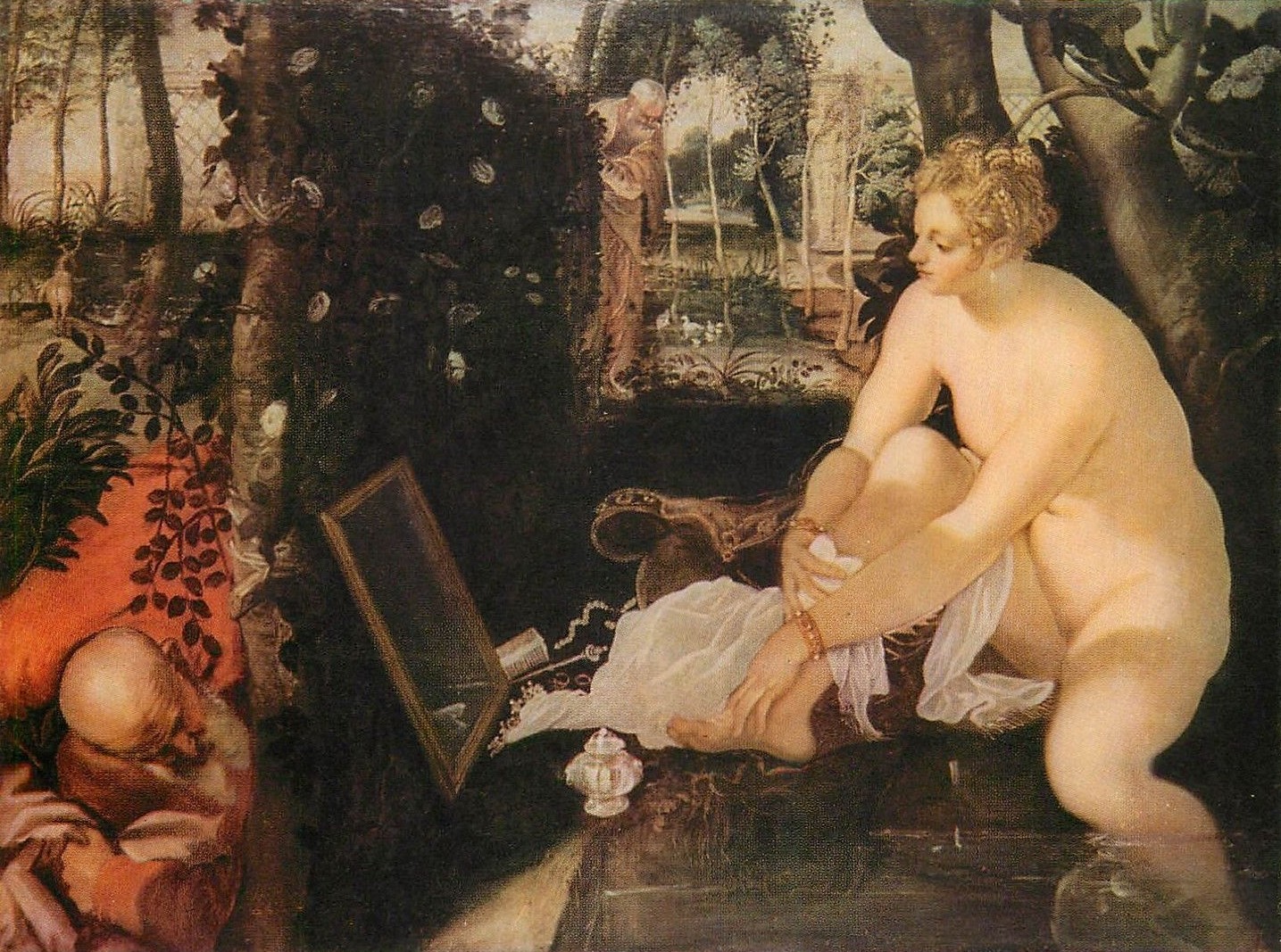 One of his works, Susanna and the Elders (c. 1555–56), which depicts a scene from the biblical episode of Susanna from the Book of Daniel, is considered one of Tintoretto’s great masterpieces. Believed to have been painted as a private commission for a wealthy patron, the painting is subtly lit and in a setting of richly varied chiaroscuro (the use of sharp contrasts between light and dark). Susanna’s beauty occupies the foreground of the painting; she is absorbed in her mirror image, and she is yet unaware of the two intruders — unlike the viewer.

He married in 1550 to Faustina de Vescovi, a daughter of a Venetian nobleman, and a prominent member of the Scuola de San Marcos. Faustina and Jacopo became parents to several children, thought to have been two sons and five daughters. The mother of Jacopo’s daughter, Marietta, who was herself a portrait painter of considerable skill, was believed to have been a German woman living with Tintoretto before his marriage to Faustina. He died on the 31st May 1594 from what was described as “severe stomach pains, complicated with fever.” Tintoretto was buried in the church of the Madonna dell ‘Orto by the side of his favourite daughter Marietta, who had died in 1590 at the age of 30.

The reverse side of the coins features detail of the painting Susanna ei Vecchioni (“Susanna and the Elders”) by Tintoretto. This painting is now part of the national collection housed at the Kunsthistorisches Museum in Vienna, Austria. In the left field, the word TINTORETTO is placed along the edge, while the value, 20 EURO, and the year of issue, 2019, are seen below. The inscription THE RENAISSANCE is placed below the primary design, with the designer’s name COLANERI shown along the lower right edge.

The common obverse design for the fourth Europa series is the work of artisans from the Monnaie de Paris and features a massive, off-centre star in the background. As depicted for the Italian issue, a female face that represents Italy, with figurative elements taken from the coat of arms of the Italian Republic, is placed inside the star outline. The design also includes cogged wheels representing industry, while branches of oak and olive represent peace and agriculture. Above, between two points of the star, is a turreted crown representing Italian sovereignty, while below is the stylised Europa Star Programme logo along with the name of the designer, COLANERI. To the right of the main motif is the letter “R,” identifying the Mint of Rome, and around the star along the left edge is the text REPUBBLICA ITALIANA.

The gold 20-euro examples will be the only option offered for 2019 as part of the Europa Star Programme. Each coin is encapsulated and housed in a branded IPZS custom case which is also accompanied by a numbered certificate of authenticity. For additional information about this coin and others available from the IPZS, please visit their website.