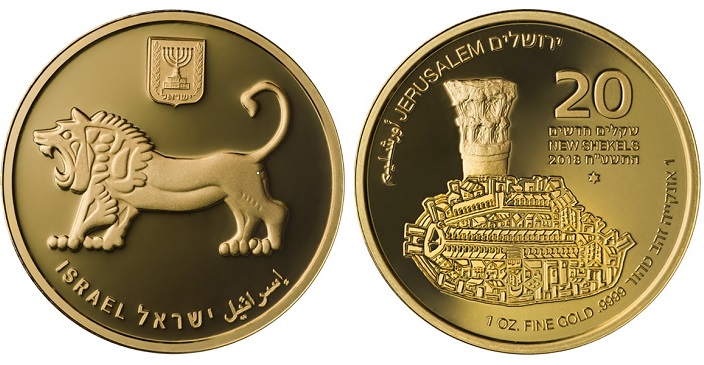 The Bank of Israel has issued (10th June) the eighth coin design within their current bullion coin series entitled “Jerusalem of Gold.” Featured on this year’s coin is the cardo, which was the main street in the heart of the city and a significant trade centre that ran from north to south during the time when Jerusalem was governed by Rome. The cardo was a feature of most Roman cities.

Aelia Capitolina, the Roman City built by Emperor Hadrian on the ruins of Jerusalem following the Bar Cochba Revolt from 132-135 A.D., had a cardo which ran from Damascus Gate in the north of the city. This cardo was extended further southwards to Zion Gate by the Emperor Justinius in the sixth century and during the Byzantine period.

The cardo had an open roadway in the centre for carriages, animals, and pedestrians. There were roofed sidewalks supported by pillars crowned with impressive columns. The mosaic map of Jerusalem discovered on a sixth-century Byzantine church floor in Madaba, in Jordan, shows the original route of the cardo and excavations in the Jewish quarter of Jerusalem revealed parts of it. Today, the restored cardo in the Old City has become a lively touristic area, reflecting the history of Jerusalem. Along the colonnaded street, modern shops have taken the place of the Roman shops that were once there. Day after day, people from all over the world walk along the sidewalk, treading on the same stones and the same stone pillars, all of which are imbued with the unique, enchanting atmosphere of Jerusalem. 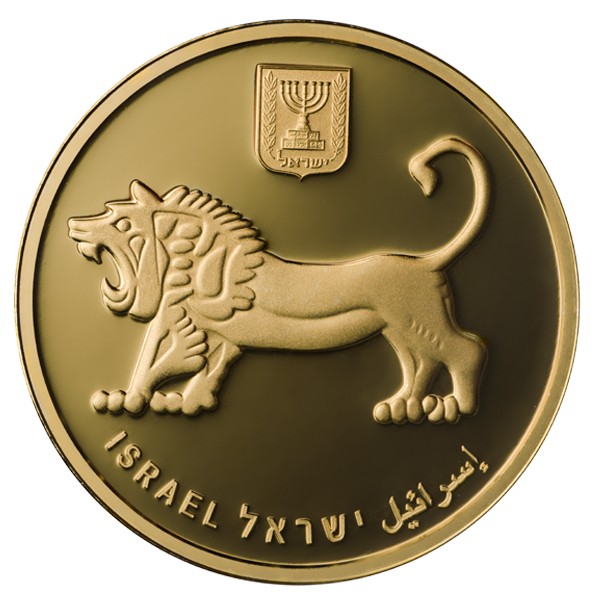 The coins are designed by Meir Eshel (obverse) and Michael Faber (reverse), and the former depicts the Lion of Megiddo with its stylized curved tail, taken from an ancient seal dating from the eighth century B.C. excavated in Megiddo (Armageddon) in the Jordan Valley. Above the lion is the Israeli state emblem and below the primary design is the text ISRAEL in English, Hebrew, and Arabic. 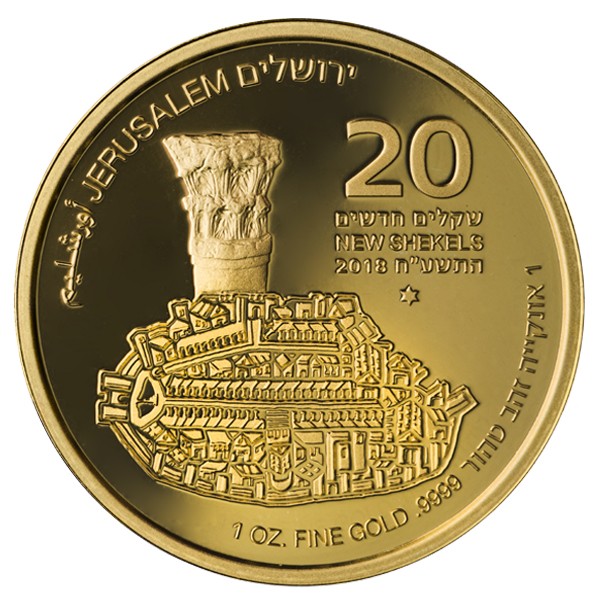 The reverse features the Madaba Map, and in the background is an example of the cardo pillars. In the upper border is the inscription JERUSALEM in English, Hebrew, and Arabic. Towards the upper right is the face value 20 New Shekels and year of issue in Hebrew and English. Below is the Star of David mintmark, and around the lower border is the metal fineness and weight, 1 OZ. FINE GOLD .9999 in Hebrew and English.

The coins are encapsulated and presented in a custom case which is accompanied by a certificate of authenticity. For additional information on these and other coins issued by the Bank of Israel, please visit the website of the Israel Coins and Medals Corporation.

Germany: New silver coin issued in celebration of the 275th anniversary of the Gewandhaus Orchestra of Leipzig